In 2006 I went on possibly the most adventurous holiday I’ve ever been on.  It involved an 11 hour flight, a risky trip through customs when I set all the alarms off due to forgetting about the belt I was wearing – not the best time to be doing this in Heathrow when they had all the extra checks to pass through – and the experience of a lifetime.

There are so many memories from that trip.  There was the first night we were there and I spent most of the night crying because I was terrified of being eaten alive by the many bugs and lizards and humongous spiders in residence in our room.  The quad biking adventure in the desert when I ended up being last in the convoy and turned the wrong way, trust me, that is not something you want to be doing in tall grass with lions and elephants in the locality!  The Zambian wedding I was lucky enough to witness quite by accident, or the shanty town we were driven through which quite literally broke my heart to see.

In our Livingstone lodge we didn’t have windows, just mesh on the windows and we were advised to go back into our lodge as soon as night fell as the hippos came up from the river and literally walked through the camp and you were likely to get in their way!  You could see them if you dared to stay up late enough.

That is just a snapshot of the things I experienced and I keep meaning to sit and write it all down so that I don’t forget anything.

One of the things that we did, one of the things that everyone should do when in Africa is to go on safari.  We went across the border into Botswana and did a driving safari which included a boat trip.  It was amazing.  We saw elephants and giraffes and crocodiles literally close enough to touch.  The most vivid memory I have is of being charged twice by elephants, first in the open 4×4 we were travelling in when I honestly thought I was about to be trampled down and secondly when we were in the boat and there was a family of elephants crossing the water.  The boat next to us came too close to the baby and the bull elephant charged at us.  We have a video clip of us that includes a lot of wobbling and screaming, followed by nervous laughter!

Here is one of the photographs from that trip.  It is one of my favourites from the whole holiday. 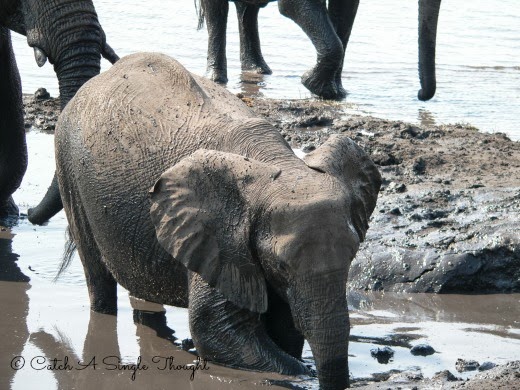