I had the best conversation with Meg this week about school.  It’s rare for her to talk about what she has learned that day, usually we are met with stony silence or a reply of ‘nothing’ when we ask her what the class got up to, so I was thrilled when she started volunteering information about the things they had been doing.

The subject at the moment is Our Bodies and this week it has apparently been all about what is good for us and what isn’t.  The children were given a task of identifying healthy food and unhealthy food and they had to place the healthy food on a green smiley face and the unhealthy on a red smiley face.  Meg was explaining to me about this activity when she said ‘I wasn’t quite sure of all the answers but David* next to me seemed to know what he was doing so I just copied him’

Genius!  Where do kids learn about cheating off one another?  She’s only 4!

Following this conversation we were in our local supermarket buying our dinner which was a treat for Eli who had chosen to have fish fingers and chips for his dinner.  Meg decided it was the opportune moment to tell the cashier that Mummy lets Eli have chips for his dinner every night, even though they are actually very bad for our tummies.  Thanks for that one Meg!

Eli had his own funny moment too.  I had allowed him to choose a little treat for himself and Meg and he had picked a small ghost chocolate which looks like the picture below.  As we were queuing to pay for it, we happened to be behind a man with a bald head…I’ll admit it, he did look quite a lot like the chocolate Eli was holding. 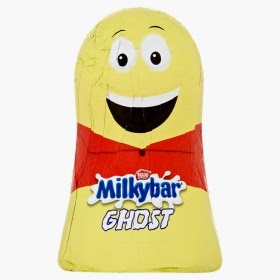 Eli obviously thought so too as he piped up in a very loud voice, ‘who that Mummy?’  I replied, sensing where the conversation was headed, ‘that’s just a man waiting to pay for his shopping.’  ‘It not a man, it a ghost…look!’  Much holding up of the ghost chocolate and pointing at the man was had as Eli continually insisted that the poor man was a replica of the chocolate in his hand.  Compounded by Eli shouting ‘I scared of ghost, I scared of ghost’ and clutching my leg, physically recoiling from the man finally followed with ‘bye ghost!’ at the top of his voice as the man left the shop.  I just hope he didn’t realise that Eli was talking about him!

It’s been a while, but I’m linking this post up with Actually Mummy’s Wot So Funee linky.