The Detective’s Daughter by Lesley Thomson 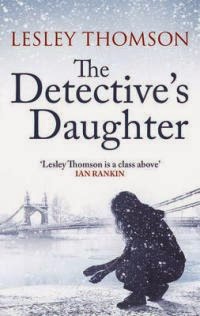 This was a suggestion made to me by my Kindle (or I suppose, by Amazon) and I liked the idea of it so decided to give it a try.

In 1986, Kate Rokesmith decides to go for a walk with her four year old son down by the river.  On that fateful trip she is murdered, lives are ruined and Kate’s death remains unsolved by the lead detective, Terry Darnell.  Inspector Darnell’s passion for solving the mystery of Kate’s death drives a wedge between him and his daughter, Stella who feels pushed aside by his obsession for finding out who the killer was.

Thirty years later, Terry Darnell dies suddenly and Stella comes across boxes relating to the case whilst sorting through his things.  Stella immediately decides to destroy them but something pulls her in and she starts to read them…

On the whole I thought this book was okay.  I don’t like to write negative book reviews as I have yet to read a book which is totally disastrous but I will admit that I struggled with this one.  It is written from a number of different perspectives and there is no indication whose perspective you are reading from, you have to decipher it as you go along.  On the whole this isn’t too much of an issue but I am personally not a fan.  I’d much rather the author just told me the person and the era I’m reading about rather than having to work it out and not concentrating on what is happening in the story because I’m so busy trying to recollect information to work out where we are in the book!

Also, I’m not sure if it was just the kindle version but there were a lot of spelling mistakes and errors too, missing words and at one point a whole plot flaw.  I can’t say too much otherwise I will give the ending of the book away but a character is seated in a chair and then is lowered to the floor.  A paragraph later, someone else approaches them in the chair.  But they are still on the floor!?!

I am sure that for some people, things like that wouldn’t be a problem but I really struggled to stick with the story.  I find mistakes a total turn-off to a book, even more so when sentences don’t make sense and I had to reread sections to make sure it wasn’t me missing something.

Another thing I didn’t ‘get’ was the retelling of what happened to Jonathan (Kate Rokesmith’s son) after her murder.  We are privy to two chapters I think of his experience at boarding school and then it stops…randomly in the middle of the book it just stops.  There is no connection or point to us hearing those facts other than perhaps if it intended to help us understand why the boy is so troubled but it just read as weird and out of place to me.  Perhaps that is the style…I certainly didn’t get it.

I thought the concept of the book was really good and I didn’t have a clue who was responsible until the end, a plus about reading on the kindle is I can’t skip ahead as easily to see who the culprit is!  I just thought it could have been written a bit better, I finished the book ultimately confused and would consider a good chunk of the book totally irrelevant to the final chapter.  It’s a shame because I can see how it could have been a really enjoyable read for me but it just missed the mark.

Not a thumbs up from me I’m afraid although I would be interested to hear from anyone else who has read it to see what they thought.