I love cake.  I am, quite probably, a cake addict.  At the BritMums networking event on Monday I was talking with some fellow bloggers about whether we were savoury or sweet kinds of people.  I am the sweet variety, hands down.

This meant that when we were sent two of the new desserts from Coppenrath & Wiese, it was very difficult for me not to keep it under wraps and refuse to share with everyone else!  However, in the interests of fairness, and the fact that Meg spragged on me after the delivery…I had to.

We were sent the Mousse au Chocolat Torte and the Stracciatella Kirsch Torte.  Both are perfect for fans of chocolate. 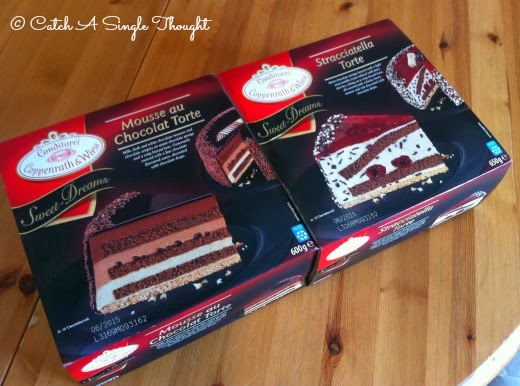 The Mousse au Chocolate Torte was heavenly!  If you are a chocolate person then this is the dessert for you.  Three layers – plain, milk and white chocolate mousse on top of a chocolate sponge sat on a biscuit base.  Writing this is making me lick my lips all over again, it was simply delicious.

The Stracciatella Kirsch Torte was a mixture of chocolate and fruit.  Made up of a biscuit base, chocolate sponge with cherry infused stracciatelle cream on top.  Meg and Eli weren’t as keen on this one as the fruit had quite a sharp taste but I thought it was equally as yummy, and I felt like I was getting one of my five a day by eating it…from the cherries, obviously *ahem*.  I don’t think either myself or my Other Half felt bad for the kids, it just meant more for us! 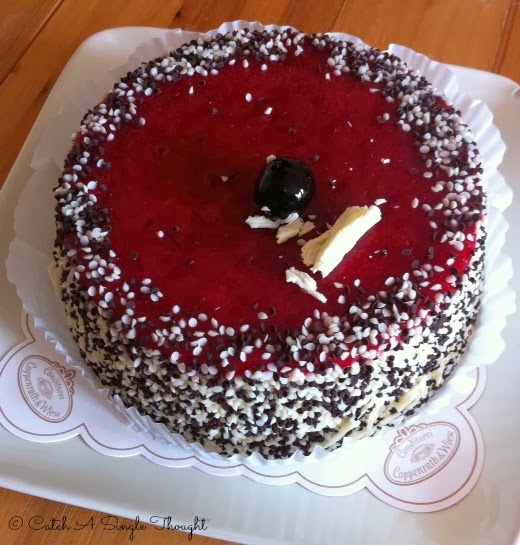 The sponge in both the desserts was incredibly light and melted on the tongue and even though the desserts themselves were quite substantial, neither of them were heavy or stodgy which was a pleasant surprise.

Both these desserts would easily serve 8 people and would be great as a dessert option for a dinner party, or even just for a family night in.  The desserts are frozen and need defrosting fully before use (that part was quite difficult…)

With Christmas just around the corner I would definitely recommend these desserts, they would be perfect for having after Christmas lunch, especially as they are both considerably lighter than you would expect.

Coppenrath & Wiese also offer a great range of cheesecakes, gateaus and patisseries which, if these two desserts are anything to go by, will also be very tasty!

Disclaimer: We were sent the two products from Coppenrath & Wiese for the purposes of this review.  All thoughts and opinions are our own.