We love family movie nights (once we have persuaded Meg that the film isn’t going to be scary!) and were really pleased when we were recently sent The Croods to watch.  Myself and my Other Half had been on a date night to see it at the cinema so we knew the kids were going to enjoy it.

In case you don’t know what the film is about: 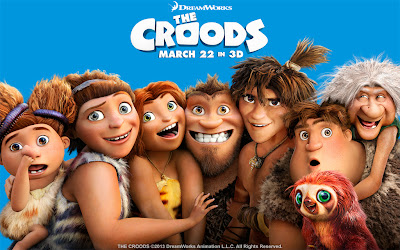 From DreamWorks Animations’s THE CROODS is the blockbuster hit that earned over £26 million at the UK box office!  Written and directed by Chris Sanders (Lilo & Stitch) and Kirk DeMicco (Space Chimps) it’s been one of the must-see animated films of the year.

When their cave is destroyed, the Croods family set out to explore a spectacular landscape filled with fantastic creatures, strange surprises…and a whole new world of adventure!  Led by an outstanding voice cast featuring Oscar®-winner Nicholas Cage, Golden Globe®-nominee Emma Stone, Ryan Reynolds and Oscar®-nominee Catherine Keener, THE CROODS is the perfect Christmas gift for 2013!

We all really enjoyed watching the film together as a family.  Eli absolutely loved the character Belt and copied each sound and noise he made, giggling like crazy every time he came on.  His ‘dun-dun-dah’ has been imitated for many days since we saw it! 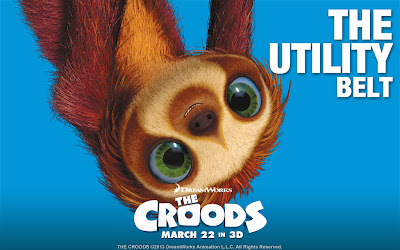 Meg, perhaps predictably, thought Eep (Emma Stone) was the best and has even asked for a tiger print dress for Christmas although I’m not sure Santa will get that request *ahem*

My favourite character is Guy.  I think the scene where the family are eating/destroying the bird and he is perched in a corner daintily nibbling on his portion and delicately wiping his mouth with a leaf is brilliant.  I also think he gets some of the best one-liners in the film although that might be my love of Ryan Reynolds coming through a little bit there….!

Meg and Eli found the scene where Grug (Nicholas Cage) is pretending to be a cool thinker like Guy and coming up with all the crazy ideas very funny too although there are so many amusing moments in the film, I could mention a good few more which had us all laughing.  I wouldn’t want to spoil the story for anyone who has yet to see it though!

I enjoyed the fact that it is different from your run of the mill animated films, it certainly got Meg asking about cave people and when they existed etc, although I wasn’t looking for an educational point of view we were given one anyway.

It is definitely a great one for the family and if you are looking for a stocking filler for Christmas this year then I would definitely recommend it!

The Croods is out on Monday 9 December on DVD and Blu-ray.

Disclaimer: We were sent a copy of The Croods for the purposes of this review.  All thoughts and opinions are our own.