Yesterday I was feeling good.  We’d ventured out to the local shop and nobody had died, we’d done some small world play, made some yummy cupcakes and overall, I thought I was winning in the stakes to be best Mum ever.  You know, the kind of Mum that we all pretend to be when we’re talking to other people about our always angelic, never misbehaved darlings.

Meg asked to do a puzzle.

No.  More specifically, I hate doing them with Meg.

You see, she has never been very good at puzzles.  Ever since she was a baby, you would get the puzzle out and she’d just stare at the pieces until you put it together for her.  She didn’t really show any interest in attempting to do it for herself.  Of course, she’d clap a well done once you’d created the picture whether for you or herself I was never too sure but it did make me feel pretty great.  Although obviously, that’s not really the point here.

In recent years, watching her play with a puzzle has become no less painful.  She attacks them in such a haphazard way, with no hope of ever getting the right pieces in the right places.  I simply don’t have the patience to sit with her and watch as she gets more and more frustrated before making me do it for her.  I mean, at 26 years old I kind of already know how to do a child’s puzzle.  What’s the point?

So I have avoided doing puzzles with her in the same way I would run from the plague figuring she would get enough opportunities to try them out at school.

But yesterday I fell into the trap.  I was on a high.  Like I could tackle anything.  I also thought she’d probably had a bit more practice since being at school and it was the first time in months I could recall her actually asking to do a puzzle without one being forced upon her so I threw caution to the wind and thought, ‘what the heck.’

Oh how wrong could I have been.

I’m not known for my enduring level of patience anyway.  As a parent, I try my utmost to make sure that I am an encourager and that I give my children ample opportunities to do things for themselves without stepping in.  As such, both Meg and Eli are quite independent and very capable of doing lots of things without assistance.  But this…this was just on a whole other level.

The problem is that Meg doesn’t look at the picture, she doesn’t consider the way the piece she’s holding in her hand might fit with the piece she has on the floor.  It doesn’t occur to her that the flat edge won’t mould with the sticking out bit of her existing picture.  She just puts it down and looks bewildered that lo and behold, they don’t go together.

It’s quite surprising as she is usually very logical about things.  Over pragmatic in some ways.  You think she would find puzzles quite easy to do.  Oh no.

I thought my eyes were going to fall out of my head after 15 minutes of watching. 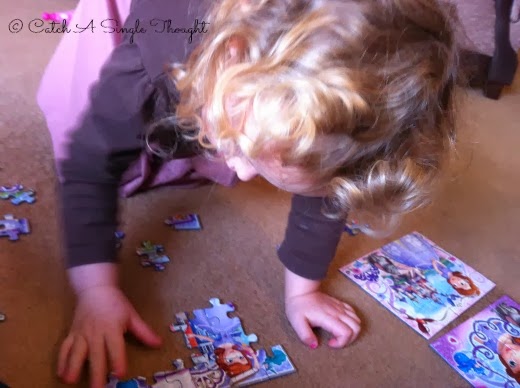 No matter how many times I explained the process to her, suggested that she look at the box to see what picture she should be replicating, it made no difference whatsoever and ultimately, guess which numpty ended up completing the puzzles?

I can now add to my CV that I am fully trained in finishing Sofia the First 24 piece puzzles.