When Meg was a tiny baby, possibly when she was around three months old, I had an epiphany.  I realised that the realm of being a mummy was not as the books made it out to be, and that I had two options: to sink or swim.
You see, Meg was a baby that cried all the time.  Always.  For hours and hours.
To begin with, I thought it was something I was doing wrong and for the life of me I couldn’t fathom what it was.  I was reading books, researching online and looking, always looking for the solution.  My Health Visitor told me it was colic and there was nothing to be done.  The GP told me it was colic and eventually she would grow out of it.  Even now writing that makes me angry; it’s always easy for someone to tell you that your child will eventually stop screaming bloody murder for three hours straight every evening when they don’t have to listen to it, isn’t it?
But, I digress.  The point was, that I realised eventually that it wasn’t anything I was doing.  She was well fed, burped, changed, rested.  She was just a baby that liked to make a noise.
So I made a decision, I was going to stop hiding away and apologising for my child who cried all the time and just accept that she was going to be that way until…until she wasn’t any more.  I couldn’t force that to happen and I couldn’t change the circumstances.  It’s something which one of my friends referenced to me a number of times after she had her own children.  She was visiting me one day and Meg set off on one of her episodes.  I didn’t apologise, I just smiled and said, ‘some babies just cry, she’ll stop in a minute.’  I’m sure that at the time my friend was looking at my purple faced, almost apoplectic baby and thinking that I had utterly lost the plot but in the end, I was right.
So back to my epiphany.
Nobody ever told me that becoming a mother was like stepping onto a battlefield strewn with minefields, loaded and ready with opinions.  Step on the wrong person and they would explode all over you in a cacophony of criticisms and veiled insults about your parenting skills.  Whether that be sleeping arrangements, routines, breastfeeding and bottle-feeding, purées or baby-led…the list is endless.
At the time I was tired of feeling judged for my choices, tired of explaining myself; rationalising why Meg wasn’t sleeping through the night, why I was pushing her in a pram which faced away from me at ‘such a young age’ and tired of justifying myself as a parent when she started to scream.  Tired of being stopped in the street by people who assumed that I was just desperate to listen to their tales of how things were when they had children and how what I was doing was wrong, wrong, wrong.  Tired of sitting in baby groups listening to other mother’s talk about their children, hold themselves up as a perfect example of what a mother should be and how all the rest of us should feel small, insignificant and like a failure by comparison.  Tired.
So, one random morning, as I paced backwards and forwards willing Meg to sleep, I made the decision that I couldn’t do it any more.  That I needed to parent the way I knew how to parent and to let go of all the assumptions people placed on me when they realised I was a mummy; to let go of the guilt I felt at not being the right kind of parent and simply be the parent I was.
I wish it was that easy.  I wish I could say now that I pushed off all the worries and have happily parented ever since but it isn’t that simple, as I’m sure any parent will agree.  For the most part, I stand by what I said.  Publicly that is certainly true and when people have sought my advice on parenting issues (which is not often, I’m not a secret guru on the matter!) I have always maintained that they know their children best and ultimately nobody can tell them the right or wrong thing.  It is for them to decide.
In the quiet moments though, when I’m distracted or when I allow my mind to wander, I do feel the guilt creeping in.  Have I made the right choices?  Do I do enough for my children?  Am I attentive enough?  Do they watch too much television?  Eat too much chocolate?  Should I discipline them more?  Less?
Round and round in circles it goes.
There isn’t an answer.  I will never know the outcome of my decisions, until my children are old enough to tell me themselves.  All I can do is trust that my innate mothering instincts have carried me through this battlefield and that when I come out the other side it will be as a seasoned warrior, able to pass on the advice to my children when they start to have babies of their own…do what you think is best.  Not what other people tell you to do.  And try not to feel guilty about it, although that will always come with the territory.
After all: 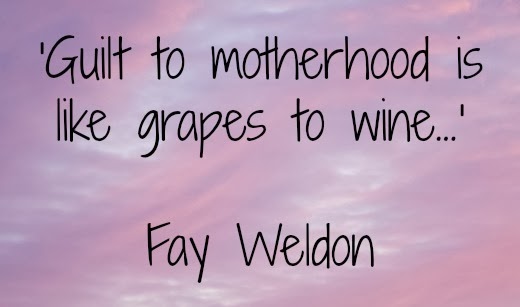 How do you deal with the guilt of parenthood?  Do you let it affect you?  Do you agree with the quote above?  I know I do!!
I am linking this post up with Sara from mumturnedmom’s new linky: The Prompt.