I am literally bursting with pride.  Pride for my little girl who has shown an amazing amount of resilience to all the changes that have happened in recent weeks and who did something yesterday which, for her, took an awful lot of gumption.

We discussed in length before we moved some of the ways that we could help Meg and Eli to adjust to the change in location and getting them involved in similar classes to those they left behind was one of the key things we thought would help them.  For that reason, we have been looking for a gymnastics class local to us which Meg could attend.  She really enjoyed going to one in Loughborough and we had been led to understand that for her age she was really quite good so we thought it would help her settle in just that little bit more if she could be encouraged to go to one again.

Luckily (amazingly?!) there is a class which runs at the leisure centre here, so on Saturday I took her along to see what it was like.  As I had expected, she spent the entire hour with her head buried in my neck, completely refusing to join in.  What I didn’t anticipate was the little commentary she provided me with…

‘I can do a backwards roll, no problem.’

I was impressed with her knowledge of what they were talking about, even if half the time she wasn’t actually looking!

At the end, when everyone else had gone, she finally deigned to show the coaches what she could do.  To say I was amazed would be a monumental understatement.  I think the coaches were surprised as well.  They kept double and triple checking her age…’she’s just FOUR?!?’

One of the things she did, was to walk along a low balance beam on her tiptoes, and then do the same thing on an incredibly high balance beam.  Something she had never done before.  She tackled it like an absolute pro and it was really great to see.  On top of that she carried out all of the movements the coach asked of her without even blinking twice.

Now, that was enough to make me feel like one very proud mama but what really set me off was yesterday after school.  I was a bit nervous about how she would react to being told I wouldn’t be able to stay with her at the class because I had Eli with me.

But, she got changed and went in with only a small backwards glance at me.

Believe me when I say that this is HUGE.  She just doesn’t do that kind of thing; especially not since we have moved and she’s become more nervous about leaving our sides.

Better still, as I was walking to collect her, I noticed you can see into the gymnasium through one of the side windows so I was able to have a quick look at what she was doing.  It was really good and I’m not just saying that because I’m her mother!!

So you get the idea I’m sure, that right now I am so so proud of my little miss.  Of course, we paid for it in the evening with a total meltdown over spilling some water but I can accept that for her taking such a big independent step. 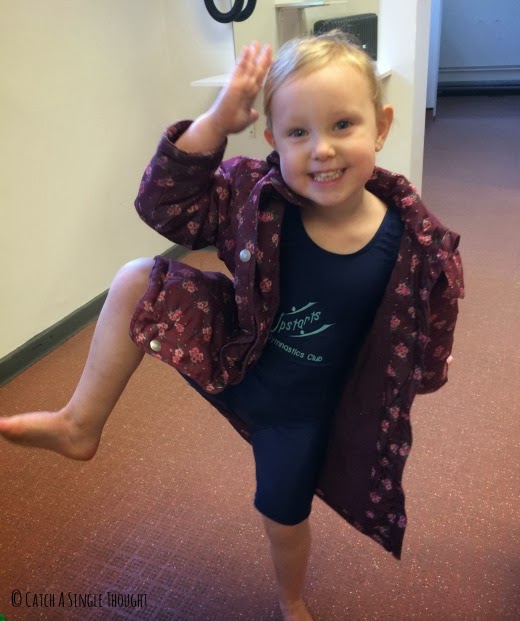