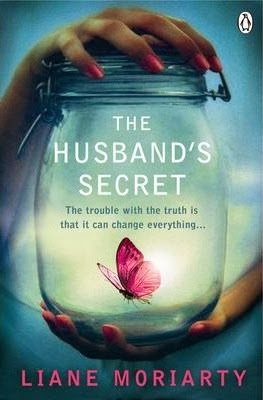 I picked this book as one for the book club I run for Duck Egg, I was going for something which would engage people and really make them think and this fits the bill perfectly.
It’s the type of book which makes you consider what you would do in such a situation and I love stuff like that.  It’s one of the reasons why I’m such a fan of Jodi Picoult (although her current book is making me snoooozzzeeee but that’s another story!) and I often bore my husband to tears asking him incessant questions about what he would do and sharing my thoughts.
The book tells the stories of three women, whose lives all connect in some way.
There is Cecilia, ‘has it all together’ modern mum of three children, wife to a successful husband, big house, well known family with connections…you get the idea.  It is Cecilia whose life will be turned upside down and Liane Moriarty sets it up perfectly, she really has no idea what is coming around the corner.
Rachel is an elderly lady whose daughter was murdered when she was a teenager.  She has spent her life looking for justice for her daughter to the point where it has driven away everyone she knows and she is incredibly angry and lonely.  I thought that Liane Moriarty captured Rachel’s emotions really well.  At times it was frustrating how blinkered she could be in the pursuit of her daughter’s killer but then, who wouldn’t be?  I was really able to empathise with Rachel and how she was feeling, even if sometimes I couldn’t quite understand it.
Tess is married with a son, she has moved away from the area in which Cecilia and Rachel live but is thrown back there when something monumental happens in her marriage.
The issue I had with this book, mainly, is that Tess’s story just didn’t fit.  When we talked about it as a book club, the general consensus was that it was another thread to fill the book out but frankly, it bored me to tears.  Her connection to Cecilia and Rachel, is at best, thin, and her reasons for running off and then going back…the whole thing just frustrated me.  It was drawn out and unrealistic in my opinion.
Apart from that I thought it was a very intriguing premise.  Cecilia finds a letter in the attic, written by her husband to be opened on his death.  Naturally she wants to open it but she manages to hold on until she has spoken to her husband (who is away on business).  His violent reaction to her not opening the letter is what sparks her curiosity and although it takes a while to build up to Cecilia opening the letter, even though you know that eventually she will, what she discovers is HUGE.  Massively life changingly HUGE.
I absolutely cannot tell you what she discovers without ruining the entire plot of the story but it is this thing which drives the whole story, which throws Rachel and Cecilia together, which raises the question, ‘if this were my family, what would I do?’
Cecilia has been happily married for years to her husband, John-Paul, and the letter reveals that she didn’t really know him at all which fascinates me.  I will admit I gave my husband some pretty intense gruelling after reading this ‘just in case’ although he’s useless at keeping secrets so it’s never really going to happen to us!
I suppose I do have another gripe in that the ending tied up a little too nicely for my liking.  It took away the raw edge that I thought the book had by posing such an interesting situation, but it doesn’t really take away from the overall enjoyment factor.
The book is fairly fluid and easy to read so I would definitely recommend it, particularly if you are a fan of Jodi Picoult or similar authors.
If you needed any more convincing, here are some of the comments from the other book clubbers:
‘Once you get past the sudden changes between characters/plotlines, it’s a pretty good read.  the majority of the story lines end up merging quite nicely, although the ending felt a little rushed and flat.’
‘It was a slow burner to start with but certainly picked up.  The ending just suddenly happened thought and the loose ends tied up in the epilogue – could have gone further.’
‘I thought it was thought-provoking, sad in places and left you wondering what you would have done.’
‘I enjoyed it and certainly engaged emotionally but wish the ending had been explored a little more.’
‘It was really thought-provoking at times.  I was often asking myself what I would do in the same circumstances.’
‘I enjoyed it mostly but was a little disappointed by the ending.’