Okay, so it has almost been a year but I’ve finally got around to blogging about Eli’s train birthday cake!

When I was looking at making him a train cake, I found that there weren’t many tutorials or examples online, unless you wanted to be presented with a pristine Martha Stewart example.  I am not a baker-extraordinare so I needed something a little bit more simple.

In the end I came up with this by cobbling together combining several of the examples I found online.

The Track
I made the track first as I wanted to make sure I had enough track to manage the amount of cake I was going to make.  I stuck two square cake boards together to give myself enough space.

Use the chocolate fingers to create the shape of your track.  For added effect this could be angled up and down the boards rather than just in a straight line but do whatever is easiest for you.  Once you have your track’s shape, outline the track with the liquorice fingers.

You might need to break these down towards the end to ensure they fit on the board.  Once you have your track, sprinkle the rice krispies in between the chocolate fingers. 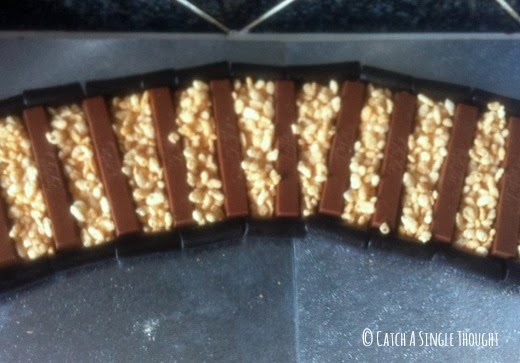 The Cake
To make the cake, you need to make two loaf cakes.  One you will leave intact, the other you will chop up into three pieces of roughly the same size.  One piece will sit on top of your whole loaf cake to make the cab, the other two will form the train’s carriages.

I used this recipe from BBC Good Food to make my loaf cakes but as it was for Eli’s 2nd birthday I left out the almonds.

Once my cakes had cooled, I chopped them up as above and laid them out on my track to make sure it looked right.  Then I made up my blue buttercream to decorate the cakes.

I looked all over online to see whether I could simply add blue food colouring into normal buttercream and there were varied responses such as needing to make brilliant white buttercream and it affecting the taste.  I decided to just go for it however and didn’t have a problem.  No one commented on the buttercream tasting funny either!

Mix all the ingredients together adding milk at the end if necessary.  This is going to be the frosting on the cake so you want it to be as thick as possible meaning the milk may not even be necessary.  Once you have made your buttercream up, carefully add a few drops of buttercream and thoroughly mix through.  Keep going until you have the colour you want.

Use a small amount of your buttercream to stick the cab onto the whole loaf cake.

It can be quite messy to frost the cake so I would suggest doing it on a plate initially.

Really, the decorations for your cake can be anything you want them to be.  I used the remaining pieces of liquorice from my track to make coal on top of my cab and then the allsorts and the cigarillos to be the train’s load.  I liked the allsorts as they were colourful and brightened up the train.

I used the strawberry laces to outline my carriages and the train itself to provide a little bit more definition and I used an ice cream cone to be the funnel.

I used leftover buttercream to attach the jam biscuits for my wheels and then stuck a smartie in the centre.

I then carefully transferred the finished cakes onto my track.

The Grass
I thought that my train cake would look a little bare just sitting on the track so I decided to cover the cake board in grass to brighten the whole thing up.

I put the coconut into a plastic sandwich bag and tipped some green food colouring in.  I tied the bag off then manipulated the coconut and the food colouring until it was the colour I wanted and evenly done.  You could add a couple of drops to begin with and keep going until you achieve the right kind of shade.  Then simply sprinkle around the cake board and you are good to go. 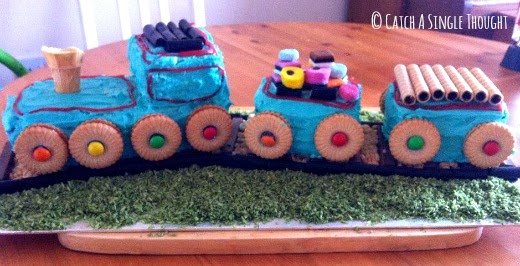 Although it wasn’t my best work (being the first time I had done most of these things!) we still had one very happy birthday boy who recognised it straight away.  Which made it absolutely worth it. 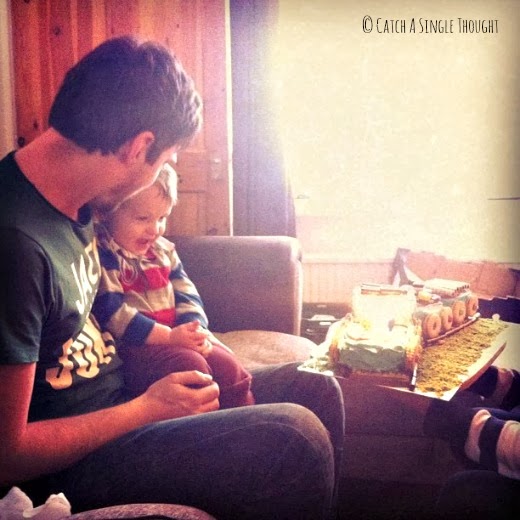 Alternative Ideas
You could make your train and it’s carriages in different colours to give it a more multicoloured feel.  I considered doing this but decided it was easier to just stick with the blue!