The Declaration, The Resistance and The Legacy by Gemma Malley 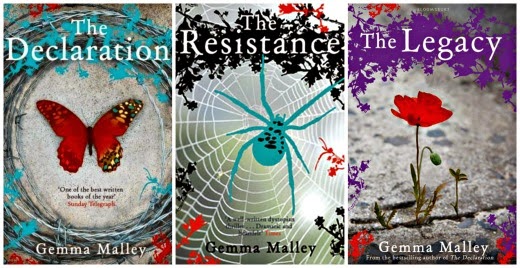 This is a dystopian trilogy written by Gemma Malley.  It’s a young adults fiction book (I believe) but as I have a secret love of dystopian novels, I thought I’d give them a go.  I think if you have an interest in this type of genre then they are perfectly suitable for older readers as well.
The books start in the year 2140 and in a world where immortality is valued above everything else.  The formula for the regeneration of cells was discovered some years before and eventually, people stopped dying and ageing and just continued to live.  This meant that children being born were becoming too much of a burden on the system and so people were banned from having children unless they opted out of taking Longevity, known as ‘a life for a life’.  Any children born illegally are collected by the Authorities and become ‘Surpluses’ (as in surplus to requirements) and have to be sent to a Surplus Hall where they are trained to become servants for those taking Longevity.
The first book, The Declaration centres around 15 year old Anna, a surplus who was taken from her parents when she was small.  She believes that she is not worthy and must work hard to ensure that she can become useful when she leaves the Surplus Hall.  Shortly after the book begins Peter arrives in the Surplus Hall and helps Anna to escape.  Peter claims he has been sent by Anna’s parents to collect her as she was never meant to be considered a Surplus.
The Resistance picks up where The Declaration leaves on, focussing on Anna and Peter’s roles in helping to overthrow the Authorities and Pincent Pharma (who make the Longevity drug) with the resistance movement known as the Underground.  The Underground’s belief is that it is not natural for people to take Longevity and to continue to live forever.  They want to destroy the use of the drug and restore the natural order.
The Legacy starts with a deadly virus spreading amongst those taking Longevity.  Although Longevity is meant to have cured all illnesses, the virus has warped to beat the cell regeneration of the drug.  This is a very fast paced book demonstrating the lengths those in charge at Pincent Pharma are willing to go to to protect the drug, how much people have become afraid of death and how the Underground works to finish Pincent Pharma once and for all.
In a nutshell.
The things I liked about this series:
– It was a refreshing idea and one which seemed well thought out.
– It was written fairly well, and there were good twists which I didn’t always see coming.
– It drew me in, so much so that I finished the last two books within a day of each other.
The things I didn’t like:
– At the beginning of the first book, Anna and Peter are 15 years old.  This age suits the first book perfectly but we are meant to believe that the second and third books simply pick up where the previous one ended.  From the start of the second book I felt Malley wrote as though Peter and Anna were in their twenties.  For example, being led to believe Peter and Anna are trying to have a baby (how many 15/16 year olds do you know who would be so anxious to procreate?!?) and with Peter getting a job and Anna playing house etc, I found the leap just a little bit too difficult to digest.  It’s not that I don’t believe it can be done but the level of maturity and thought that they both put towards their roles is not that of a teenager, which I struggled with.
– Although the books were written okay, they weren’t brilliant.  The plus of this is that they were quite short which meant that all the action was squeezed into a small amount of time and there weren’t any unnecessary elements to them.
– Some of the characters were just plain annoying and I couldn’t see the meaning or the reason behind their inclusion.  Sheila, for example, does nothing to attract empathy and I found myself skipping over sections where she was featured.
Compared with previous dystopian books I have read (The Hunger Games and the Divergent series) this series held it’s own with the concept but the writing didn’t come close.  That said, if you want a quick read which does throw a lot of curveballs and keeps you wondering what will happen next, then this fits the bill.
Have you read these books?  What did you think?