The One With The Sinking Mud…

Jess McGlynnFebruary 13, 2014
Many of you will know that Thursday is usually the day I share our outdoor adventures from the weekend.  We have tried to embrace our new rural(ish) life and have really enjoyed exploring the local area.  It’s ideal for Meg and Eli as we are spoiled with lots of open spaces they can run around in and explore.
However, this week’s was nothing short of a fail.
The wind on Sunday was so violent that when we finished our monthly treat of a family meal out, we decided to abandon our plans to walk up on the pier for fear of losing our children hats.
Instead we thought we’d head down to the beach as we haven’t actually been down onto Southport beach yet, despite having been here a month and a half.
We pulled up, got Meg and Eli changed and ready in their wellies and waterproofs.  I think at this point my Other Half had been suggesting that maybe it wouldn’t be such a good idea but I decided to persevere nonetheless.  We were all kitted up, what was the worst that could happen?
To start with, all was well. 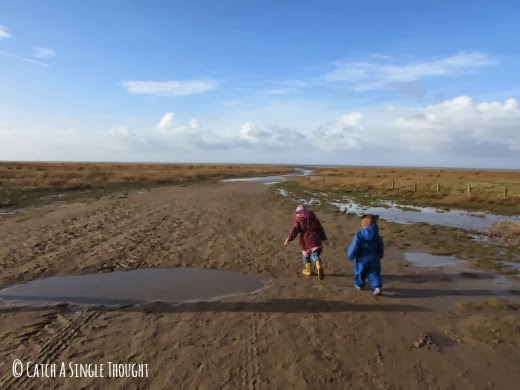 We walked for about five minutes down the path towards the sea.  I was really looking forward to using my new camera to take some photos following my photography course on Saturday.  The lighting was great, the sea was a bit choppy for some action shots, and the kids were bouncing off the ceiling getting up to all sorts.  It was going to be perfect! 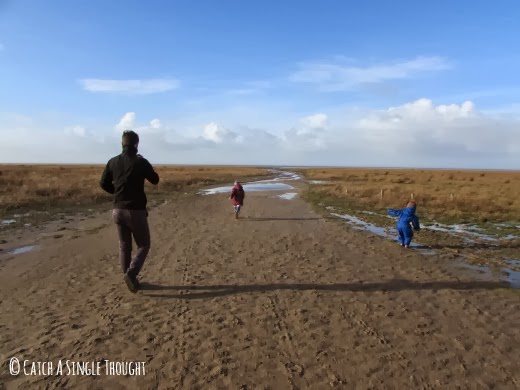 Of course, things don’t always turn out the way we expect.
It started with Eli falling face first into a puddle.  Except he didn’t just fall in a little bit, he practically swam in it.  This made him howl.  Loudly.  Much to the amusement of a dog walking couple who were coming just behind us. 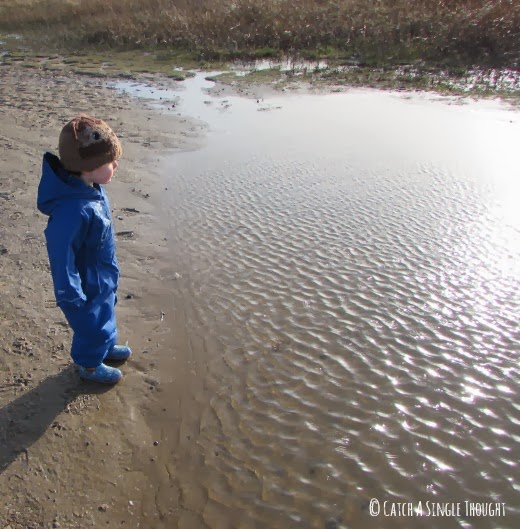 My Other Half volunteered to walk him back to the car as although he was wearing his new all in one suit, muddy water had covered his face and his hands and he wasn’t happy in the slightest.
Meg and I decided we would carry on for a little while.
A few minutes later I noticed that Meg was no longer walking beside me.  I turned around and there she was, a little way back, just standing stock still.  I called for her to run and catch up and she just shook her head.  I walked back to her, grabbed her hand and tried to set off.  She didn’t budge.  I stepped closer and said, ‘come on Meg,’ and she still didn’t move.
Then I noticed that I was sinking in mud.  As was Meg!
It took me a minute but I managed to free her from the mud and we carried on.
You’d have thought that would be enough, wouldn’t you?
A couple of seconds later I noticed that Meg was walking strangely.  Almost hopping.
I asked her what was wrong and she mumbled something about her welly.  I didn’t have a clue what she was talking about until I looked at her feet and then all became clear.  She only had one welly on!
Apparently we had left her other one behind, stuck fast in the mud.  Stuck it was too, it took me both hands to free it! 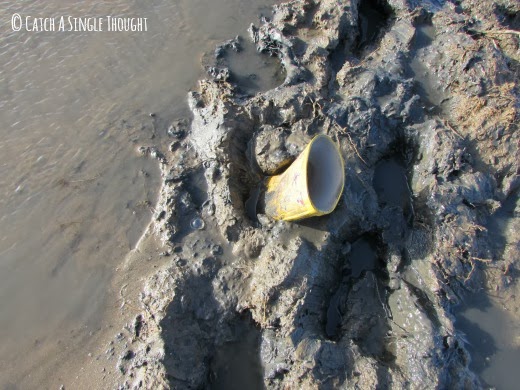 Suffice to say we scurried back to the car and called the entire journey quits.
I think we were out of the car for all of about ten minutes.
Not our most successful outdoor adventure!!