Harvesting the Heart by Jodi Picoult
You love your baby, but you just can’t cope with being a mother.  What would you do? 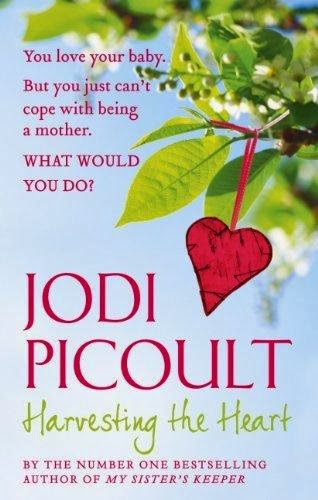 I have to start this review by saying that usually I am a big fan of Jodi Picoult books.  I mentioned in a previous review that I love how she tackles subjects which might feel uncomfortable, or ask questions that most people prefer to ignore.  When I read a Jodi Picoult book I become one of those annoying people who has to share their every thought out loud with the person closest to them, asking them, ‘what do you think about this?’ etc etc.  I’m sure my husband seems to go out more often too!
That said, this book was a far cry from previous ones I’ve read.  I will admit that the topic made me uncomfortable.  The story is about Nicholas, an up and coming cardiac surgeon and his wife Paige.  Their meeting is somewhat unusual, and in the build up to it we learn a lot about Paige and her troubled past.  Their relationship too is not one of equals and after a while, particularly after the birth of their son, it begins to fragment and break apart resulting eventually in Paige’s decision to leave.
As a mother I found it really difficult to empathise with Paige when she decides to leave her 3 month old baby.  I could understand the events preceding it and surrounding it, could even understand why she felt the need but when it came to it, I’m not sure that Picoult really did it justice.  I didn’t believe that Paige needed to and perhaps that is my own short sightedness but I thought that Picoult could have gone deeper and further with this.
Most of the characters were selfish and self-centred, who made no attempt to recognise the effects of their actions on other people.  I’m not sure whether this was the intent but after the first few chapters I actually couldn’t have cared less what happened to Paige and Nicholas.  I honestly thought they needed a reality check.
I think that Picoult does capture the emotions of first time mothers, the loneliness, the exhaustion, the need to appear as though everything is going well, but she didn’t use any of that in driving Paige’s desire to leave and once Paige has actually gone, chasing after the ghost of her own mother, she doesn’t seem all that bothered by the absence of her son which I found hard to believe.
I feel bad for moaning about this book but I just felt the whole plot was full of holes, and I really didn’t enjoy reading it.  Whilst it won’t put me off Jodi Picoult in the future, I wouldn’t advise this as one for her fans.

The One With The Sinking Mud...

The One Where...My Slow Cooker Exploded