The One Where…My Slow Cooker Exploded

My blog posts seem to be full of, ‘almosts but not quites’ at the moment.  I’m not sure what is going on!

In actual fact, my slow cooker did not explode, sorry for reeling you in under a falsehood but I’m quite certain that it almost did!

I have been making an effort to use our slow cooker more, for convenience and efficiency, and a whole host of other reasons which make slow cookers so awesomely awesome and so on…

One of the things which I decided to have a crack at was making my own bread.  I loathe having to buy bread, we always seem to run out at the most inconvenient times (such as 8pm on a Sunday evening) or buy in bulk and then forget to defrost the next loaf meaning I have to try and defrost slices in the toaster for packed lunches but without toasting the bread…you get the idea.  I desperately want to buy a breadmaker but when I saw that I could potentially use my slow cooker to make bread I figured that was the issue solved.

The thing I had neglected to remember was that with a breadmaker, you simply pop the ingredients in and it does all the hard work for you.  This is not the case with the slow cooker and you have to do all kinds of kneading and things.  Since the almost exploding slow cooker incident I have discovered this is a skill I do not possess.

So, I digress.  Bread in the slow cooker.

I believe it is entirely possible and this is the recipe I used:

Mix half your flour, the sugar, salt and yeast into a bowl and mix well.

Add the water and mix until your mixture is of a gloopy or gooey consistency.

Add in the softened butter and mix.

Sprinkle flour onto a clean work surface and knead the dough well (I found some  ‘how to’ videos on youtube)
NB: I struggled massively with this part.  My dough was sticky and didn’t knead well at all, so I would say make sure you add enough flour to stop this happening before you start kneading.  Adding flour in afterwards just makes one heck of a mess as I discovered!

Line your slow cooker with greaseproof paper, pop your dough in and cook for 2 and a half to three hours on high.

The thing I forgot here, is that it would rise.  I checked on my bread right before I went out to do the school run and it had risen right up to the top of my slow cooker.  I panicked, having visions of coming home to find that the lid had blown off and my entire kitchen was covered in sticky bread dough.  So firstly, I removed the lid which any professional slow cooker user will tell you is a big no-no as this simply adds to the cooking time and then, I turned it off. 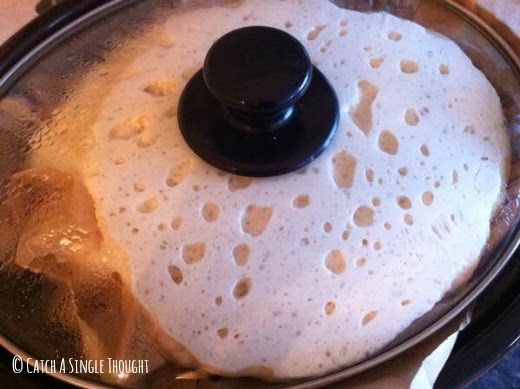 When I got home it had sunk a little bit, so deciding to throw caution to the wind, I turned it back on again.

I am fairly certain that had I not done these things, the bread would have turned out absolutely fine.  As it was, when the three hours cooking time was over, the majority of the bread was cooked but some was not.

This was the final result. 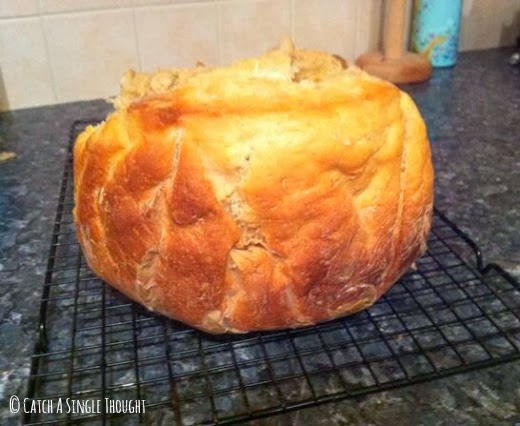 As you can see, just at the top it hasn’t quite sealed over properly which I think was caused by taking the lid off / turning the slow cooker on and off.

I also seemed to have made an error in judgement with my greaseproof paper as some was stuck into the crevices of the bread but I am viewing this as simple teething problems.

I am confident that the next time I make this, it will work!

The bread that had cooked, tasted absolutely fine and although I think I need to practice my kneading skills, I’m not sure that bread in the slow cooker is a total lost cause.  Watch this space…

Afternoon in The Park