Kiss Me First by Lottie Moggach
On the internet, we can be anyone we choose.  No one knows who we really are. 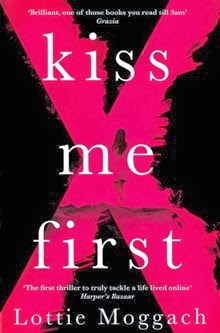 Where do I start with this book?  It was such an absorbing book that I finished it in less than a day.  I found the writing flowed so well and was very easy to read which meant I could literally race through it.
The premise as well, totally fascinating because it is such a plausible idea.
The story centres around Leila, a young(ish) girl who has lived quite a sheltered life.  She finds being sociable difficult and awkward, always seeming to be one step behind everyone else and so spends the majority of her time online.  Although it’s not openly mentioned in the book, she definitely appears to be somewhere on the autistic spectrum, she is very literal and doesn’t seem able to compute why someone would say one thing, when they actually mean another.  One day she discovers a website called ‘Red Pill’ where philosophical concepts are discussed.  Leila becomes a regular presence on the website and one day is approached by the website founder (Adrian) and becomes involved in a plan to help someone commit suicide by taking over their identity online and keeping up the premise that this person is, in fact, still alive in order to protect their family and friends.
This book is incredibly intense; the story is told by Leila who is narrating her side of events some time after the whole plan has been exposed.  It is a dark subject matter, the idea of someone committing suicide is never a light topic after all, but Leila’s naivety, her isolation from the real world, adds in to make the story seem quite suffocating at times, for want of a better word.
The thing that really gripped me though, was how much this could be a true story.  Social media is everywhere these days, it is a massive part of people’s lives and I think for the most part we all share information about ourselves and assume that those who reciprocate are (for the most part) exactly who they say they are.  The idea that someone could impersonate another person, someone you might think you know, is quite terrifying.  Imagine you hadn’t seen a school friend for a number of years and suddenly they ‘friend’ you; you add them because you ‘know’ them.  But do you really?  It’s quite a scary thought!
The only gripe I have about the book is the ending.  It was a short story, not much over 330 pages, but the ending was rushed and could have gone further I think.  I can’t say much without giving the end of the story away but there are definitely some things left hanging and unexplored at the finish.  I think Lottie Moggach deliberately wrote it that way but this can be quite frustrating for the reader.
The book kind of reminded me of a modern day The Net (90’s Sandra Bullock film) and is well worth a read.  I thoroughly enjoyed it and would recommend it.  I’m looking forward to seeing what Lottie Moggach comes up with next!