The theme for this week’s The Gallery is ‘Adventure’ and for me, there aren’t many times when I’ve really had to step outside of myself, throw caution to the wind and just embrace what is happening which, to me, is what makes an adventure erm…adventurous.
My Go Ape experience was one of them, but the one which really sticks out in my mind, and which I’ve shared a little bit about before on this blog, is my holiday in Africa.
I think if someone was to offer me now the chance to hop on a quad bike and set off into the African desert I would probably laugh in their faces and then politely decline.  Particularly once they revealed that there was the possibility of running into a pride of lions or a herd of elephants along the way.
At 19 years old though you don’t really think about those things, well at 19 I didn’t think about those things, just that it would be an amazing opportunity.
It was, it really was, even when I ended up at the back and everyone else went left and I went right…and kept going right thinking that eventually I would meet up with someone before I realised I was probably being incredibly stupid and should just stay where I was.  Luckily my dad had noticed I was missing and came back to find me although I’m not sure the two of us together were any better!
At the time, there were elements of the holiday which never lost their fear factor, such as walking across the holiday park and being faced with a gigantic baboon and having to slowly and cautiously turn away, and then there were elements which will forever continue to amaze me when I think of them, such as:-
– having monkeys swing down onto the table first thing in the morning and snatch my breakfast away (I *may* have screamed)
– going to the market to buy some trinkets and being offered a seat in the middle of this bustling and busy place and having all the vendors bring their wares over, trying to offer me the best deal and negotiating with them and being asked for socks and biros instead of money.
– being told how many cows I would be worth in a marriage contract.  I think it was two or three because I didn’t have blonde hair!
– standing on the decking talking to my Other Half on the phone (boyfriend at the time) and suddenly having the waitresses from the restaurant coming out with their brooms, yelling and shouting because, ‘oh look there’s a crocodile like right there‘ (I *may* have screamed)
It’s one of the holidays which made such an impact on me and I hope that one day we get to take Meg and Eli, so that they too can have a stunning adventure of their own.  It’s the kind of trip which could never be replicated for me, it was testing in ways I never thought possible and yet, when I look back, I can’t actually believe that it was shy old me who went and did those things. 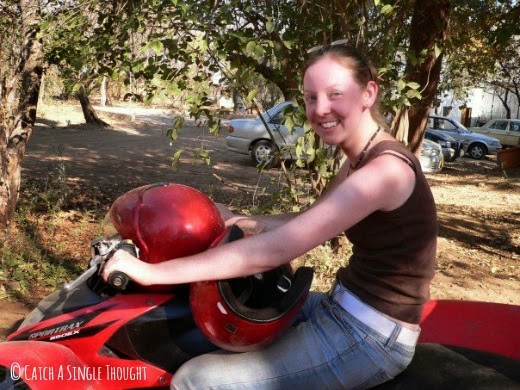 When I look at this photo I feel a detached sense of pride because I know that was me but at the same time it feels like a whole different lifetime when that happened.  Probably because I wouldn’t have the courage to do it all over again!