When I saw that the theme for this week’s The Gallery was ‘Sport’ I was excited.

Sport was a massive part of my childhood.  I joined my first two teams, playing netball and rounders, when I was in year 5 and I played right up until I left school at the end of Year 11.  When I started secondary school I added tennis, badminton, hockey and running to the list of sports I played and represented my school in.

In Year 6, I was lucky enough to play on a rounders team which won best in the county.  I did hold on to my medal for a number of years but misplaced it somewhere along the line which has never stopped irritating me, small issue as it seems it’s the kind of thing I would have liked to be able to show Meg and Eli.

One of things I wish I had never done was stop playing sports.  I thoroughly enjoyed the team camaraderie; being good helped too I guess.  I was very lucky in that sport, whatever form it took, seemed to come quite naturally to me.  I know that isn’t the case for everyone but I always looked forward to PE lessons.  However, when I went to sixth form college it just fell off my radar as it didn’t seem as vital as studying for my law exams (see where that got me!)

So, imagine my disappointment when I went to look through my old photographs for one of me playing sports and I couldn’t find a single one.  Not a single shot.  I almost (almost) called my old school to see whether they kept hold of the team shots they used to display on the wall in the PE department; if they do then there are a number of fetching photographs of me in Year 9 with bright orange hair which I would have just loved to share with you!  Unfortunately I’m not sure that schools even hold onto that sort of thing, maybe one day I’ll ask just in case.

So, I’ve had to cheat and go for a representation of sports that we watch instead.  There is a big divide in our household with my favourite sport being rugby and my Other Half’s being football.  Heaven forbid there should be a clash and the rugby and the football are on at the same time…

For my Other Half football is the only sport he could ever contemplate playing and he still plays it now on a weekly basis.  One of the first things he did when we moved to Southport was hunt out the local team.

When it comes to the topic of football there’s an even bigger division down one half of our extended family…are you red, or are you blue?

It was the first question I was ever asked by one of my Other Half’s aunts and I was perplexed.  Did it matter?  Well, apparently it did as she made a big deal out of the fact I went for red, when she’s a blue.  I’m not actually a particular football fan but since I made my choice of Liverpool over Everton I’ve never been allowed to forget it!

I shall admit here that the only reason I ever chose Liverpool was because Sporty Spice (my favourite Spice Girl, natch) was a Liverpool fan.  There…I’ve said it!  Now you may mock me!

When we found out I was pregnant with a boy there was a big to do over what team his first football shirt should represent (honestly, they take it so so seriously) – as I’m not actually that fussed I decided to surprise my Other Half on Eli’s first Christmas… 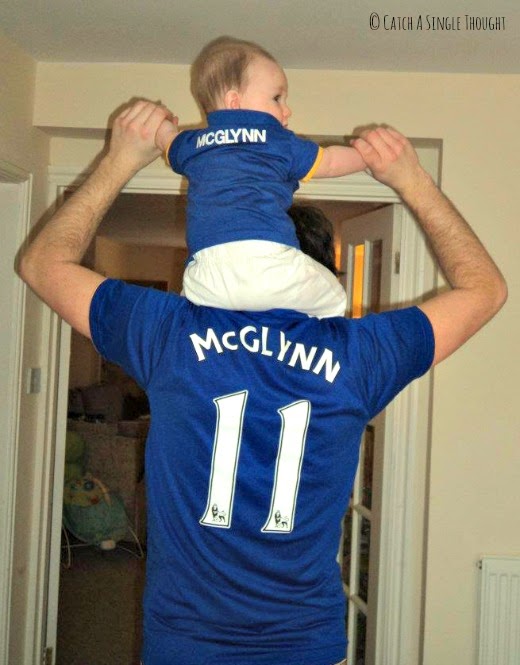 To be honest, whether Eli decides to be an Everton supporter, whether Meg does, whether they both shun football in favour of another type, I hope that sport plays a big part in their childhood.  So many important lessons can be learned in the winning and losing of games, testing yourself physically and keeping fit of course, learning to work as part of a team and also the different skills you have to employ during various sports.

I, for one, have never stopped being proud of my ability to play racket sports with either hand.  I am naturally left-handed but was made to do a lot of things in primary school with my right hand, meaning I’m ambidextrous in some things.  When I started playing racket sports I was too lazy to learn backhand, and instead preferred to just switch the hand I was playing with.  A very important life lesson wouldn’t you agree!? 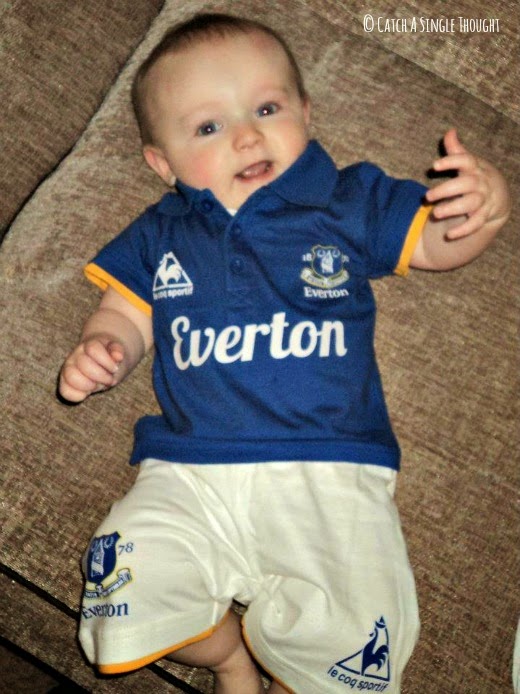