This week Meg had her first ever after school play date and to say she was excited was something of an understatement.  Every morning in the week of, she asked me how many hours until her friend came to play and on the day itself I was issued with a list of instructions for what she was expecting when she came home.

This consisted of: chocolate milk, heart shaped cookies and a tea party set up.  Always one to oblige, I decided to stretch my biscuit making skills and try out a new recipe.  I was suitably impressed; although much bigger than I thought they would be, these cookies were soft and tasty, even four days after I’d baked them.  A rare occurrence.

Beat the sugar and the butter together until you have a creamy mixture.  Add the egg and vanilla essence and mix well.

Gradually add the flour and the salt and fold until ingredients are well mixed.  You might find it easier to use your hands at this point, I usually do.

Add the chocolate chips and stir to ensure they are mixed in well.

Roll mixture out until it’s around 2cm thick and use heart cutter (or whatever shape you fancy) – keep repeating this process until all the mixture has been used up.

Place hearts on a baking tray, well spaced out as they will rise and expand, and bake for 15-20 minutes until lightly golden. 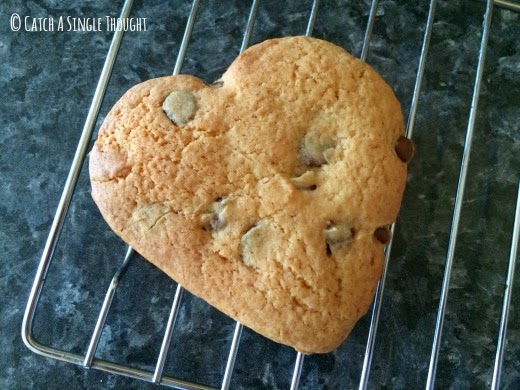 The girls had two each so they were pleased with the results and I munched several alongside cups of tea so I can also confirm that these are very tasty cookies!