As I mentioned in a couple of posts earlier this week, on Sunday we visited part of the Ribble Estuary and entered into some bug hunting.

I have to admit, I’m not a fan of anything with more than two legs but in the spirit of embracing nature I thought it would be nice to let Meg and Eli have a go at discovering some creepy crawlies and mini beasts.

It started well, armed with their Woodland Adventure backpack, which contained all the necessary items they would need they headed out to see what they could find.  A lot of their time initially was spent lying prostrate with their noses in the grass trying to see what they could rustle up but once we convinced them they were more likely to come across something in a bush, we made some progress. 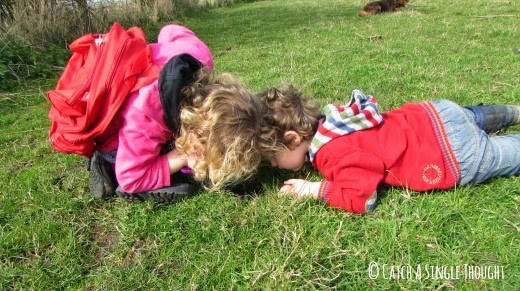 My Other Half spotted a millipede which was our first find.  Meg used her tweezers to pick it up and then popped it into the bug pot and had a go at counting the number of legs.  After a few minutes of that, she let it go and turned around and dropped her bug pot right down a rabbit hole.

Luckily my Other Half was on hand to stick his arm in and retrieve it.  Turns out, rabbit holes are really, really deep and he ended up with his entire arm covered in mud.  A bit more of an experience than he was hoping for I think.

They then spent some time digging in the mud to see what else they could find; they did discover a number of little beetles but they all moved too quickly to be caught and put in the pot.  It didn’t put them off trying though. 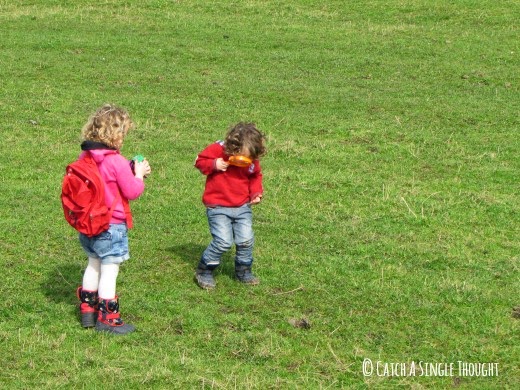 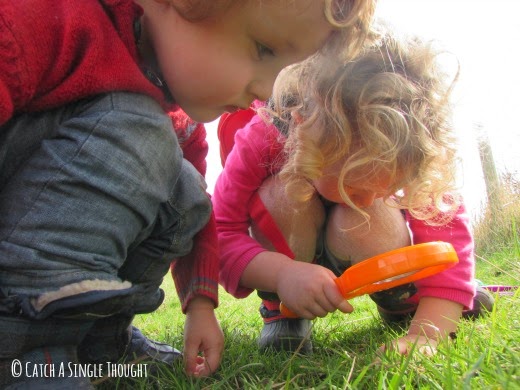 The great thing was that myself and my Other Half could just stand back and let them explore.  There were a few minor scuffles and disagreements over who could look through the magnifying glass and who got to use the tweezers but on the whole, they worked things out between themselves and just had a brilliant time investigating the natural world around them. 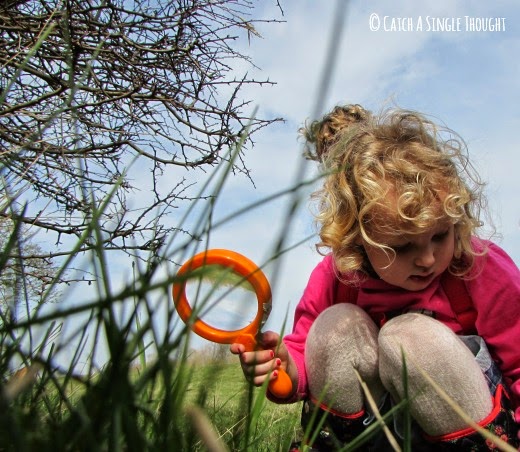 I loved listening to Meg explain to Eli what they were doing, and saying things like, ‘if it’s got six legs then it’s an insect,’ it really shows how much she is learning at school and I love that she is keen to pass that knowledge on to her little brother, even if it comes across very Peppa Pig-esque!

I think allowing them freedom to set the pace and do what they wanted to made all the difference; usually when we go out for a walk it involves a lot of cajoling and bribery to keep the momentum going but we didn’t need to do any of that, we simply let them get on with it and before we knew it, a few hours had passed!  I honestly think they could have stayed out for twice as long as we did too, and that they would have continued to find ways to entertain themselves.  There’s a lesson in here somewhere about not trying to control things too much, I just know it!

Giving control over to the kids also meant that when it was time to head back, we realised that we had hardly walked any distance at all.  Sometimes the long walks clearly aren’t the best. 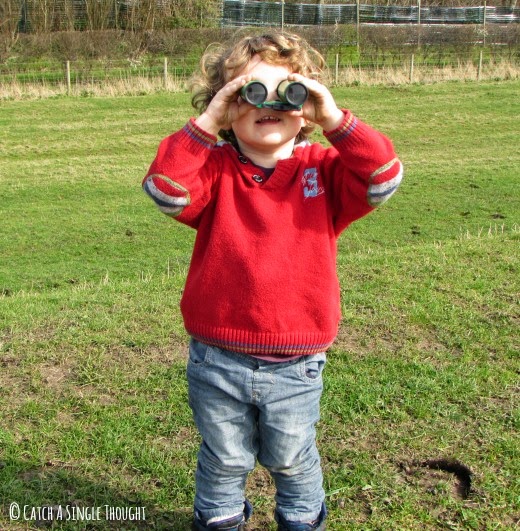 The best part of all, of course, was that I didn’t actually have to touch a single bug…although Meg has since asked if we can build a bug house to encourage the little things to come into our garden.  This is less nice if you ask me!