Jess McGlynnApril 22, 2014
I am a member of the Collective Bias® Social Fabric® Community. This shop has been compensated as part of a social shopper amplification for #CollectiveBias and its advertiser. 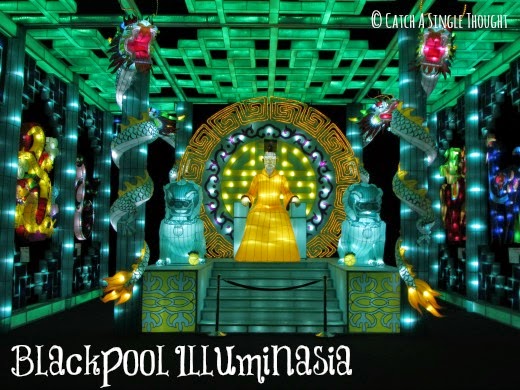 This weekend we headed up to sunny Blackpool to experience one of their newest attractions; ‘Illuminasia’, the world’s largest indoor illuminations.  I haven’t been to Blackpool since I was about seven years old so I was excited to see how it would have changed.
The day before our trip, I visited the Illuminasia website to book tickets.  It was a very straightforward process, you can book online through Ticketmaster or you can buy direct from the box office at the attraction which is located in the Winter Gardens in Blackpool. 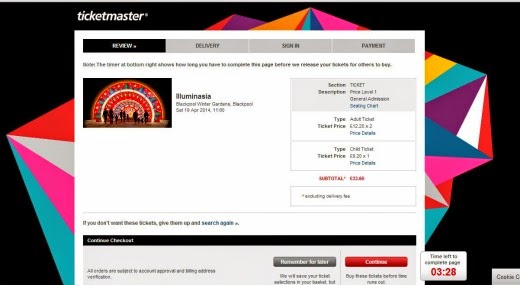 On Saturday we set off for Blackpool which turned out to be an adventure on its own.  Being Easter weekend, and the weather being so lovely, it seemed as though the whole of the North West had come to Blackpool.  It took us over 45 minutes to navigate our way through the town and find somewhere to park.  I was worried that the attraction was going to be packed but actually once we arrived, we quickly realised that visits are staggered so there’s only a certain number of people at any one time.
Before we went through into the exhibition the tour guide handed Meg and Eli a scratch card each which had a number of multiple choice questions.  The answers to each of the questions could be found in the different rooms featured on the tour and if handed in at the end, they would receive a certificate.
I wasn’t sure what to expect from the exhibition, especially when the tour guide started to talk about the first room and how we were about to meet the Chinese emperor.  The kids absolutely soaked it up though and were excited to get in and see what it was all about.
So, we headed down the colourful corridor and into the first room where we met row upon row of soldiers, all lined up like the terracotta army.  Chinese lanterns hung above our heads and blossom trees stood in the background.  It was breathtaking, especially when you got up close and realised that it was all just fabric and lights. 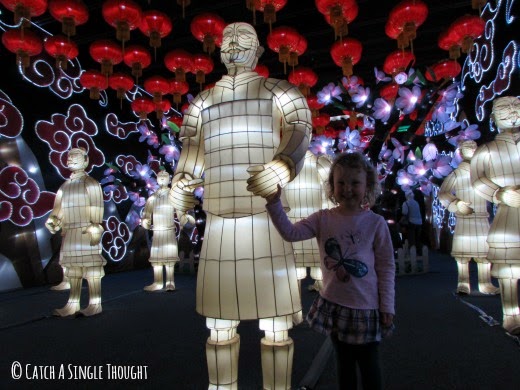 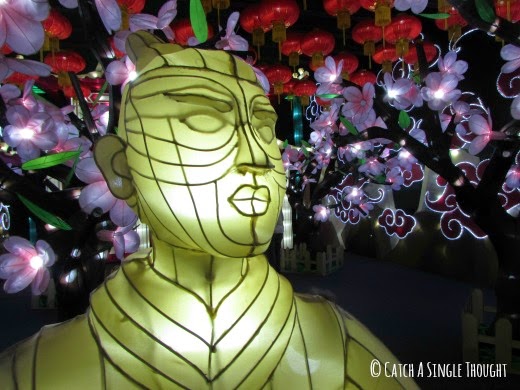 We were encouraged to take as many pictures as we liked and once we had finished looking around the first room we gathered at the end, where the tour guide told us a short story about the emperor and taught us how to say ‘hello’ in Mandarin.  Luckily the kids already knew the answer ‘Nǐ hǎo’ thanks to the wonders of The Lingo Show! 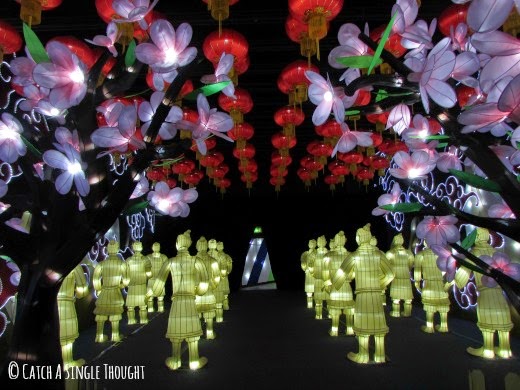 The next room featured the impressive and huge Emperor seated on his throne surrounded by pictures from the Chinese Zodiac and which years the animals represented.  One of the questions on the scratch card related to finding a specific date and Meg really enjoyed walking around the hall trying to find the right answer.  We also enjoyed discovering our own animals using our dates of birth. 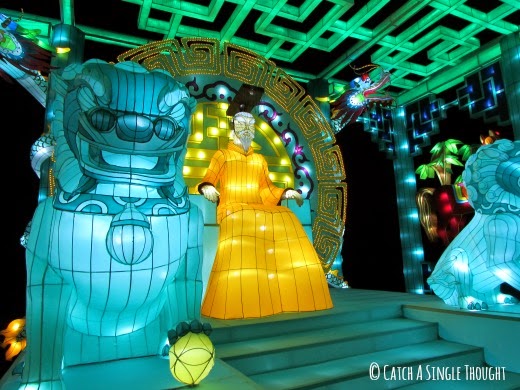 Once we had passed through the first two rooms, we were left by the tour guide to explore at our own pace.  The remainder of the exhibits followed various themes including space and the ocean as well as having one which featured local landmarks. 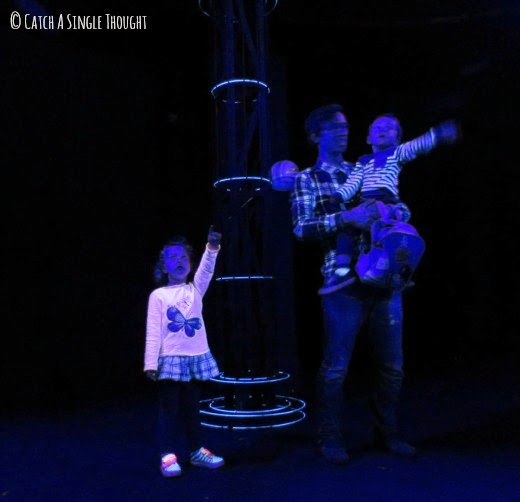 I think the kids particularly enjoyed walking down the shrinking tunnel into the ‘land of the giants’, which featured lots of familiar creepy crawlies and mini beasts.  I had thought we might be able to convince Meg that we had genuinely been shrunk but she wasn’t having any of it and twigged right away that the items in the room were large, and we were just the same size.  She’s far too smart for a 4 year old!

In my personal opinion this was also the best room.  There was so much to see as well as having some interactive features, including a giant moving spider much to the amusement of my two children and the horror of me! 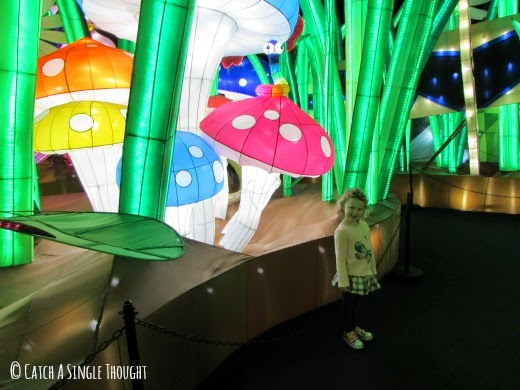 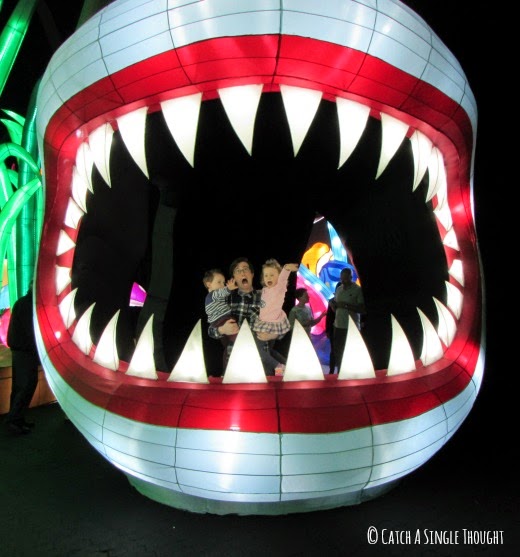 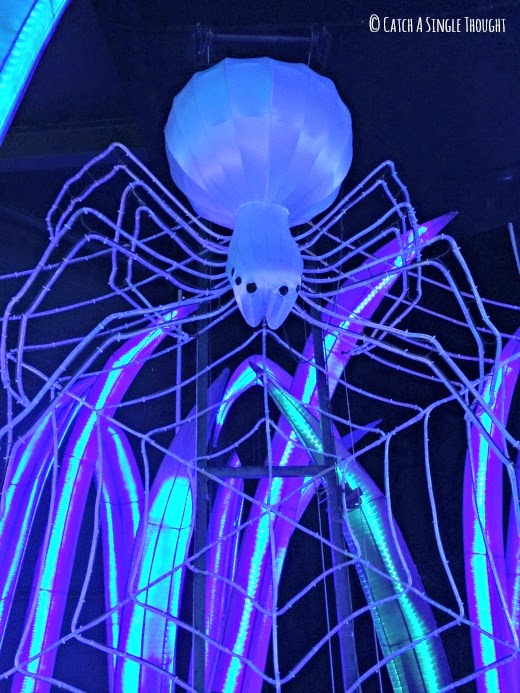 The final part of the exhibition was a live laser show featuring a ‘glow-bot’ (a dancing illuminated robot) which again, completely transfixed Meg and Eli.  We had joked earlier on about them not sitting still for it, but we were totally wrong and they were fascinated with the show and the movement of the laser lights. 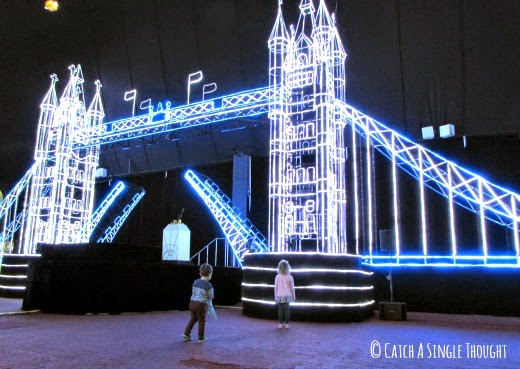 After pictures with the glow-bot and exchanging our scratch cards for certificates we bought some flashing rings from the selection of souvenirs at the end; these were very reasonably priced (surprisingly!) and Meg was thrilled with her certificate. 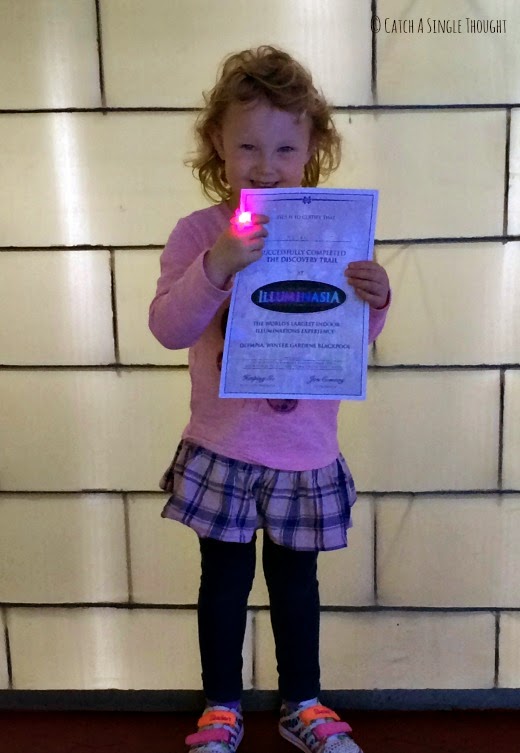 Overall, we thought it was a completely fascinating exhibition.  You can go round as many times as you like once you have bought the tickets and we spent almost two hours wandering through.  Within our tour group there were people of all different ages and they all seemed to enjoy it just as much as we did.  One lady in particular was very enthusiastic and said to me on a number of occasions how amazed she was by the entire thing.  I think that speaks for itself!

I know I must seem over the top about it, but I think it comes from being genuinely surprised.  Other than the first exhibit where we had to persuade Eli not to try and climb the blossom trees, it was ideal for both our children and a great way to pass a couple of hours.
Disclaimer: This post was sponsored by Collective Bias.