Defence Against The Dark Arts: Anti-Ageing

Growing up I was never one of those girls obsessed with make up (if you can forgive my brief love affair when I was 12 with bright green sparkly eye-shadow and sticking gems to the side of my face…), I seemed to miss the boat on perfecting how to do eyeliner or getting foundation to look seamless.  I think I was probably too busy thwacking a ball with my tennis racket or training for cross-country or something.

I struggled through wearing different kinds of foundation and not really making it look all that great until I was in my twenties and a friend suggested I try Bare Minerals make up.  In the world of effortless cover up, it was like striking gold dust.  Lightweight, dead easy to apply and the end result looked pretty flawless.  Lack of eye make up skills aside, I wasn’t doing too badly with my skincare regime.
Then, a few weeks ago I spotted a photograph of myself laughing and horror of horrors, I had crows feet around my eyes.  Crows feet!  At 27!
I’m not sure why it was such a shock.  I suppose I had believed that I would age as beautifully as my mother has done, but then she has always had gorgeous skin.  Even now, coming up to being 50 she doesn’t look it in the slightest.  Apparently I have not inherited those ageing gracefully genes and so I resolved I needed to do something about it.
Recently, my skin has taken a turn for the worse.  I am suffering from suitcases which wouldn’t look out of place at Heathrow under my eyes, regular breakouts, especially along my chin, not to mention the dreaded beginnings of wrinkles…
I turned to my old friend, the internet, and hunted for good anti-ageing creams which would halt my frown lines in their tracks and restore my skin to glowing goodness.  I was actually shocked at the cost of some of the creams available.  Sure, they promise to hold the secret to the elixir of life but could I really afford to spend £50 on a miracle cream?
The short answer is, no.  I could not.  We just don’t have that level of surplus income available at the moment, even if it stops me from looking like Cruella Deville before my time.  Not to mention the fact that I just loathe the effort of having to put four million different products on my face before I can go to bed.  I still harbour memories of when I was a teenager and I bought myself cleanser, toner and moisturiser from a very well known company.  It was aimed at pubescent humans and I vowed that with these wonder products I was going to beat my problem skin.  Unfortunately, it turned out my skin was rather sensitive and what I ended up with was large burnt patches of red on my face which was even less preferable to the occasional outbreak of acne…but, I digress.
The point is, that whilst I need something to tackle my skin issues, if it can’t be done in five minutes flat then I’m just not going to be able to stick it out.  That might seem lazy, but then, as the mother of small children I have long learnt that if it can’t be done in five minutes flat, it ain’t getting done!
Having put it off for as long as I could, at the weekend I headed into Boots to see what products I could rustle up.  It was painful, more for my Other Half than me I think, watching me wander up and down the aisles, trying to work out which product wasn’t going to make my skin crumble away, and was actually going to help me whilst at the same time not causing my bank account to go on red alert.
In the end, I settled for a Simple product.  I read the ingredients, figured they sounded like they would be pretty good for my skin and considered that there weren’t any hidden nasties which would cause a flare-up.  Combined with a product I was recently sent to review in the form of HealGel…I give you the five minute Defence Against the Dark Arts…otherwise known as the Anti-Ageing Mission. 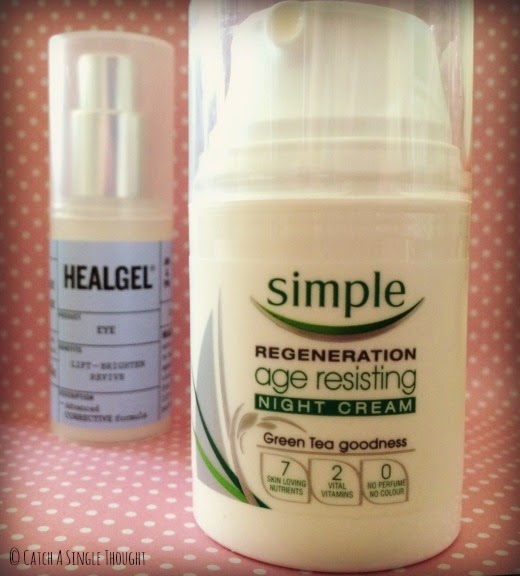 Now, I have to be honest and say I have no idea how it will work out.  I have been using it for three days now and so far so good, although my skin doesn’t seem much different at the moment.  But I am keeping everything crossed.  It’s still in one piece which is fairly good going.
Do you have any anti-ageing or good skincare products you would recommend?