I have to admit that before being asked by teapigs if I would like to take part in their green tea matcha challenge I had never really considered green tea as a drink I’d like to have in my life.  I have a number of friends who swear by herbal teas and, maybe it’s the yorkshire lass in me, but I have just never been swayed.  I like my tea to be strong and dark and very much tea-tea!

So, I had to do a bit of research beforehand and when I saw all the benefits that drinking green tea offered I thought it had to be worth a go.  teapigs kindly sent me out a modern matcha kit which included:- 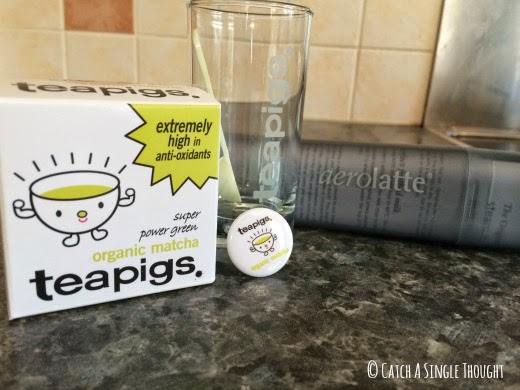 Matcha is made from organic green tea leaves which have been ground down into a fine powder.  You can drink it a number of ways: as a matcha latte (this was my choice), added into a smoothie, sprinkled on your cereal etc…because it is a powder it can be added into almost anything which makes it very versatile.

Health benefits wise, matcha is basically a very concentrated form of green tea.  It is packed full of vitamins and minerals and is particularly rich in antioxidants.  Some of the benefits from drinking matcha include: healthier skin, an energy boost and assistance with weight loss.

If you are already a drinker of green tea then you might be wondering what the difference is between normal green tea and matcha: essentially because you throw away the leaves afterwards you aren’t getting the full goodness which comes from the plant.  When you drink matcha as a fine powder mixed in liquid you are ingesting the whole leaf, so nothing is missed.

I chose to drink the matcha as a latte, mixed and foamed with some warm milk.  I have never tried green tea before so had no idea what to expect although as it was healthy I wasn’t expecting it to taste good.  The first few times I tried the shot I chickened out of actually allowing the latte to sit in my mouth and just swallowed it down whole.  This worked quite well for me but I figured for the purpose of the review I had better actually taste the stuff. 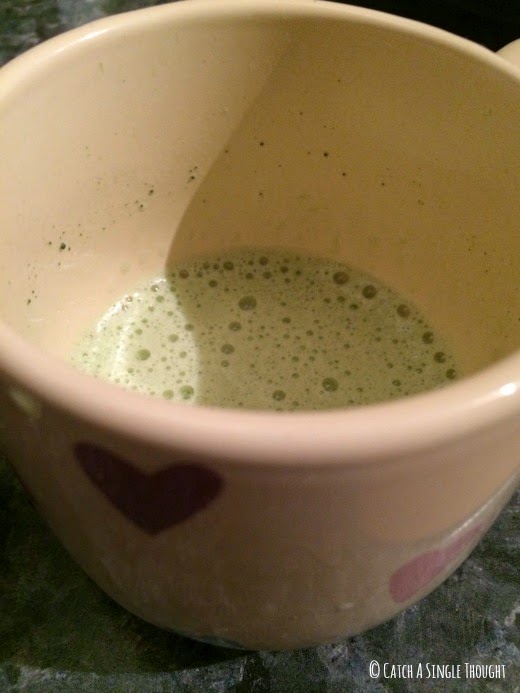 I’m not going to lie, it is certainly an acquired taste.  It is very bitter and if you don’t make sure all of the powder is mixed in before you drink it, your tongue will get a very sour shock.  That said, I have spoken to a number of friends who swear that you do get used to it and some even claimed to like it!  I won’t go that far and I did go back to just drinking it down quickly and without tasting it but then maybe I’m a wuss!

As for the health benefits:-

– I definitely noticed an improvement in my skin.  My complexion was better and I do think it looked healthier as a whole.

– Energy wise, matcha claims to not only energise but also to calm: I’m not entirely sure I noticed a difference with this but maybe that is never going to be a possibility with two children under the age of 6!  That said, during the time period I was taking it I also completed a number of large projects which would normally have my stress-levels through the roof; my Other Half commented that I handled it like a pro and I can only think that the matcha tea had something to do with that.

– I did also notice that I drank less normal tea which must mean that I was craving caffeine less and therefore I must have been feeling more energised.

– I wasn’t using the product to try and lose weight so I can’t comment on this particular aspect.

Overall, I was quite impressed.  Whilst the differences weren’t dramatic I was only testing it for a short period of time and I wouldn’t have expected them to be.  It is obviously an additional way to look after your body and I would definitely be interested to try it longer term to see whether I notice a real lasting change.  One of the best elements is that it is very simple to take and you can add it in easily to be a part of your every day routine.

If you would be interested in trying the matcha tea for yourself, teapigs have kindly offered my readers a 10% discount which is available until the end of June.  Simply use the code catch when placing your order.  Prices start from £2.

Disclaimer: I was provided with a match modern set from teapigs for the purpose of this review.  All thoughts and opinions are my own.