On Saturday, the whole family set off for the Etihad stadium in Manchester.

Meg was running in the 5k Color Run accompanied, a little reluctantly, by me.  She had been very keen to take part, not just because it was raising money for Save the Children but also because it sounded like a lot of fun.  What child wouldn’t want to be given permission to get covered head to toe in paint?!

She made a little video beforehand, which explained why she wanted to take part:

On the day we joined the thousands of people standing at the start line and waited our turn to set off.  Having done Race for Life last year, I had some idea of what to expect but, as you might expect, the atmosphere here was slightly different.  They don’t time the Color Run and as its tag line in ‘the happiest 5k on the planet’ you can probably imagine it’s not for the serious runner.

The weather was glorious, which was a relief.  It had been miserable the day before and I had wondered whether it was worth going if we were just going to get rained on but I needn’t have worried, the sun made an appearance after all. 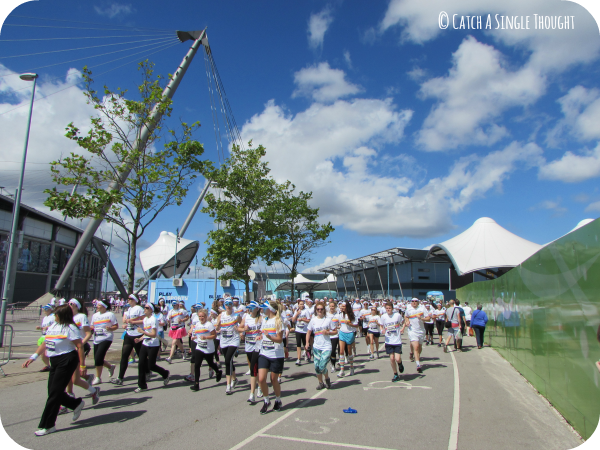 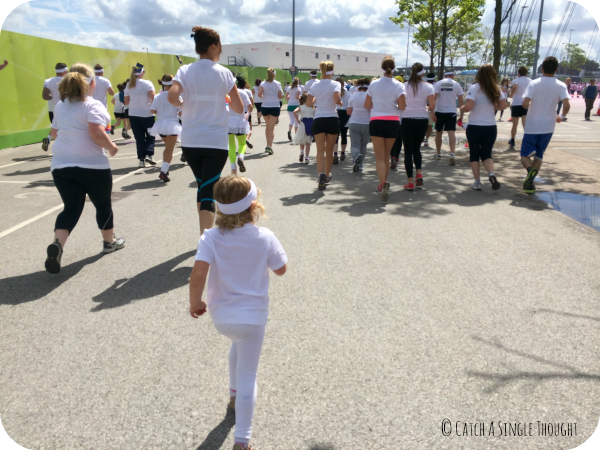 There were four paint stations; pink, blue, yellow and orange, which were spread out at various intervals throughout the run.  One of the reasons they don’t time the race, and why it probably isn’t for those who want to test themselves, is that people often hang about in the paint sections, rolling around and throwing the powder and generally enjoying themselves and making sure they are completely covered. 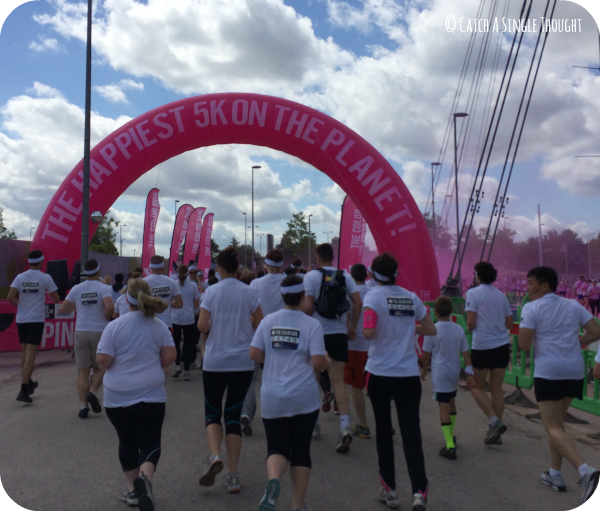 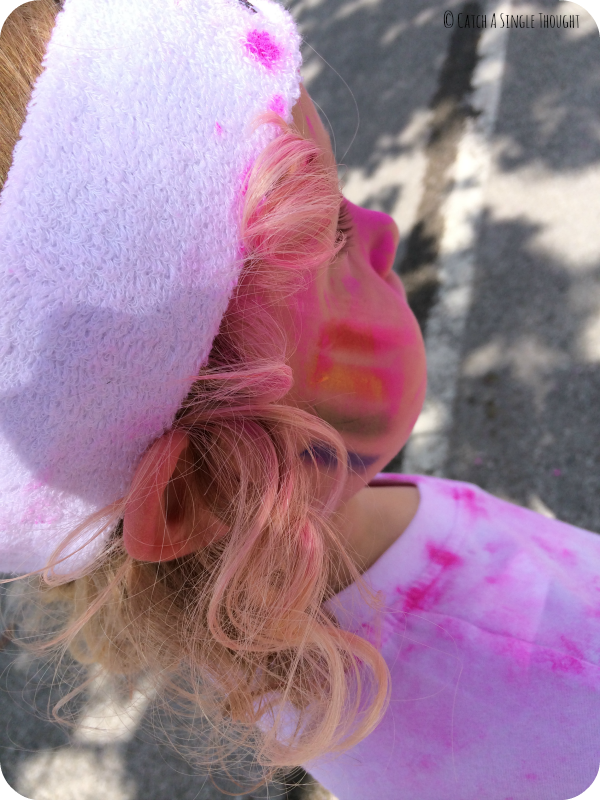 The only downside to this is that it did create a bottleneck and you were left queuing just to get into the next paint section!

We ran where we could, and managed to complete the race in under an hour which I wasn’t expecting as it was quite slow going at some points.  Especially when Meg decided to play in the yellow paint.  I don’t know if it was the colour, or just her energy at that point but she absolutely loved being in the yellow paint; was laughing and giggling and scooping up big handfuls to throw at passers-by. 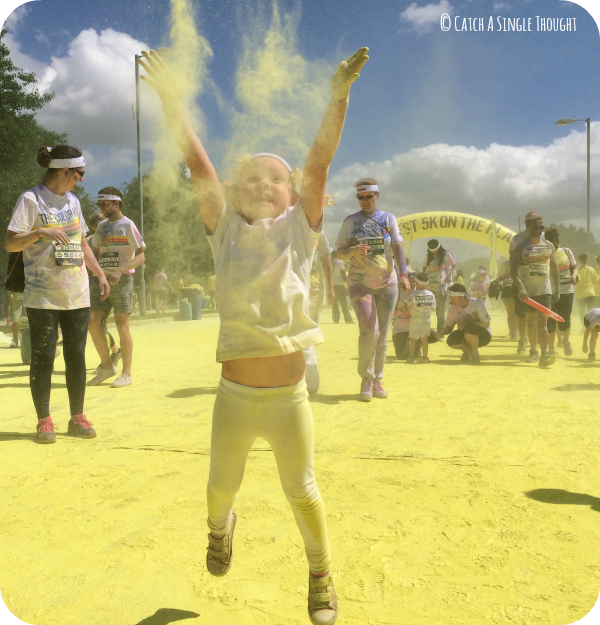 Overall the run was brilliant fun.  Meg was in her element, being high-fived by the other runners and being allowed to get completely messy.  I enjoyed that part a bit less, especially when someone decided to throw a big splodge of orange paint in my face.  I can categorically say that powder paint does not taste nice.

Of course, the best thing really is that people were taking part in the race to raise money for a good cause.  Meg was raising money for Save the Children and almost doubled her initial target of £50 which was brilliant.  A huge thank you to everyone who sponsored her *cough* there’s still time *cough* – it was really amazing to be able to explain to Meg what the money she has raised will help do.

…and that, in my book, made it worth taking a shot of paint to the face! 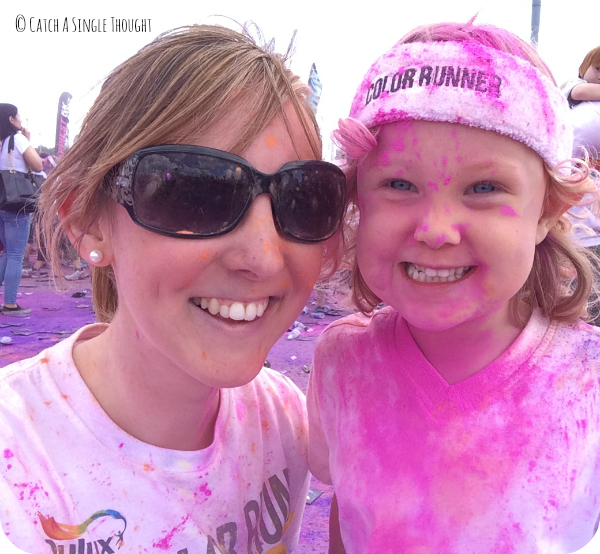 As was seeing this in Meg’s sharing book for school.  Heart melting moment! 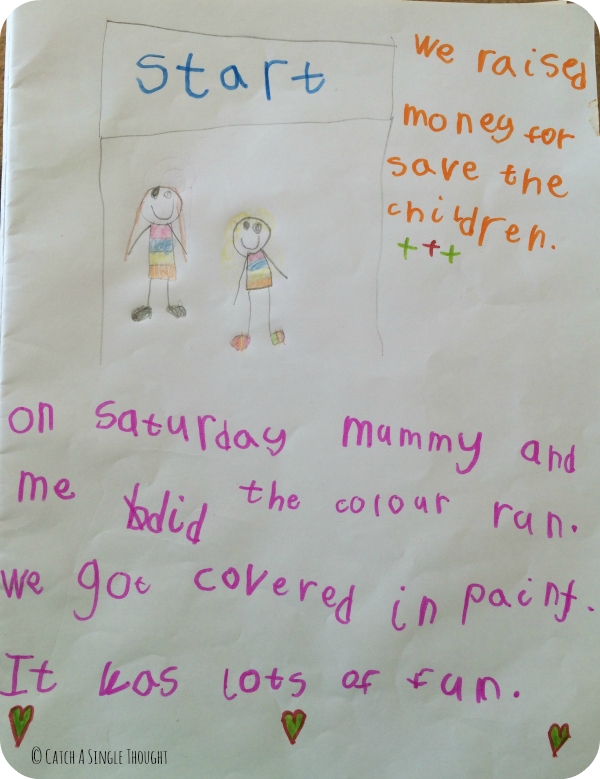 Thank you to LV= for providing me with the ticket.