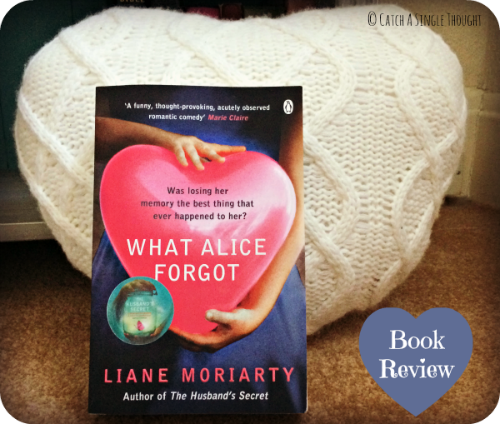 What Alice Forgot by Liane Moriarty
Was losing her memory the best thing that ever happened to her?

As she begins to piece her life back together, and parts of her memory begin to come back, Alice realises that somewhere along the way she lost herself, and that she doesn’t really like the person she has become.  But is it too late to find her way back?

I really enjoyed this story.  I was a huge fan of The Husband’s Secret so had real high hopes for this book and Liane Moriarty did not disappoint.

Her characters are well-written and believable, which I love as you really feel like they are people you might bump into on the street, rather than exaggerated versions.  Liane Moriarty’s writing style is also very easy to read, and I would find myself sitting for far longer than I meant to just totally absorbed in the book.

We follow not only the story of Alice, as she begins to recover her memory, but also the story of Alice’s sister, Elisabeth who at the time of Alice’s accident is actually estranged from her sister.  We discover Elisabeth’s story in the form of a journal she is writing to her psychiatrist and whilst her thread of this novel is quite heartbreaking, it is also an interesting perspective to have added in.  I also, strangely, could identify a lot with Elisabeth and some parts had me roaring out loud.  But I won’t give those away!

The part I enjoyed most about the story was that once again, it makes you ask yourself questions.  How did Alice’s life get so far from where she expected?  Is that likely to happen to me?  Are we all just victims of the way our lives happen to pan out or can we be in control?   How has my life changed in the last 10 years?  Once again my poor husband was subjected to my incessant natterings on this topic.

Because I can’t read a book without offering some critique, I would have liked to have had more parts of the story from Nick’s perspective.  We do get some bits and pieces from him, but he’s such an integral part of the story that I was interested to know more from his point of view.  But, you can’t have everything!

Overall, I thought that Moriarty unfolded the story gradually, and beautifully and I would thoroughly recommend this book to anyone who has read The Husband’s Secret, and new readers alike.