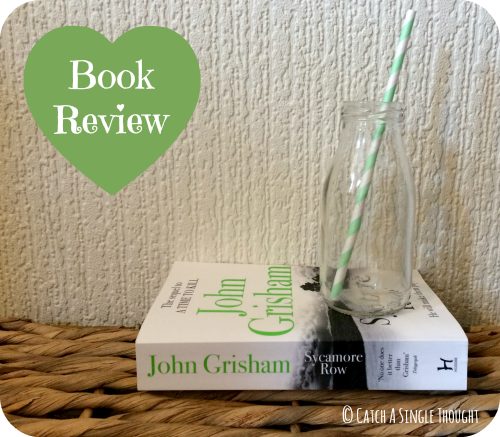 Sycamore Row by John Grisham
He will make them pay…

This book came as part of my anniversary extravaganza of new books from James but, to be honest, I wasn’t sure about it.  The last Grisham book I read left me feeling cold and I didn’t want this to be a repeat.

That said, I was excited as I really enjoyed A Time To Kill and as this is the sequel, I was intrigued to see where Grisham would take the story next.  As it happens this is not really related to the first book, other than it featuring the same lawyer, Jake Brigance, and having a fair few references to the trial.

The story begins a few years after the success of the murder trial in A Time To Kill and we discover that Jake is down on his luck.  During A Time To Kill, the Klan burn down Jake’s home, forcing his family to flee and when this story begins, they are still living in rented accommodation, fighting with the insurance company for the money they need to rebuild their house.  Work has almost all but dried up for Jake as well and as idealistic as ever he is simply counting the hours and waiting for his next ‘big break’.

Then one day a local, old, rich, white man called Seth Hubbard, hangs himself.  The day before he commits suicide, Seth rewrites his will, cutting out his ex-wives and children and leaving the vast majority of his fortune (which measures in the millions) to his black housekeeper, Lettie.

Jake has never met Seth but receives a copy of the will in the post, with instructions from Seth to fight to defend the new will and see that his wishes are followed.

Therein follows a battle between Seth’s children, who bring in the big city lawyers, against Jake who must prove that Seth wasn’t out of his mind or pressurised into changing his will by Lettie.

It’s the typical David and Goliath style story which Grisham favours and is full of his usual tricks and turns.  I thoroughly enjoyed it, and found that I had no idea where Grisham was going to take the story.  The courtroom scenes are as grand as ever and I loved Judge Atlee; he was just perfect as the no-nonsense judge from the Deep South.

Criticisms would be that in places Grisham waded through a lot of unnecessary peripheral stuff, such as the over the top reminders that Jake and his wife don’t keep alcohol in the house, even to the point where they reprimand a guest who brings them a bottle of wine…in fact, weirdly, Grisham referred to alcohol pretty much all the way through the story which I found to be a nuisance at the end, ‘okay we get it, they like a drink!’ and I had a few eyes glazed over moments but it didn’t take away from the story too much and overall this was much more typical of a good Grisham book than some of his other recent work has been.

Overall, I would recommend this to any Grisham fan.  It gets top marks from me.

Glamping versus Camping With Children