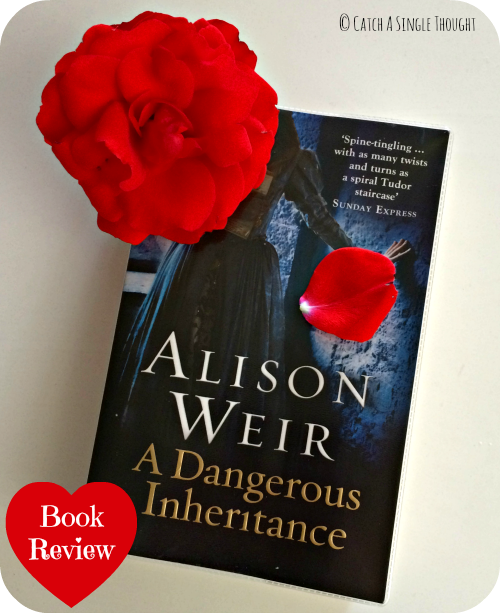 A Dangerous Inheritance by Alison Weir
Two women separated by time are linked by the most famous murder mystery in history, the Princes in the Tower.

Although I am a huge fan of historical fiction, Alison Weir is not an author I am all that familiar with.  I read ‘The Lady Elizabeth’ a number of years ago but haven’t picked anything by Weir up since.

I was drawn in by the premise of this book however; the story of two women, Kate Plantagenet and Katherine Grey whose stories take place 70 years or so apart but who are both drawn to the mystery of what happened to the young princes in the tower during the reign of King Richard III.

Kate Plantagenet is the illegitimate daughter of King Richard III and we pick up her story as her father takes over the English crown.  It was interesting having this perspective, as Kate saw King Richard as a loving father and is horrified when rumours begin circulating about all the horrible things he has done in order to secure himself the throne.  Weir has largely based her story of Kate Plantagenet on supposition as little documentation survives which tells of her life.

Eighty years later, Lady Katherine Grey discovers some papers which belonged to Kate Plantagenet and is inspired to begin her own investigation into what really happened to the princes, amongst the backdrop of her own life as sister to the ‘traitor’ Lady Jane Grey, then during the reigns of Mary and Elizabeth.

I found Weir to be a rather long-winded writer although I don’t know if this is just because there are no chapters, just one section relating to Katherine Grey followed by a section relating to Kate Plantagenet and so on.  That said, I found the stories of the two Katherine’s completely fascinating and I wish that Weir had focussed more on their stories rather than the mystery of the princes.  A lot of Kate Plantagenet’s dialogue is solely about her quest to clear her father’s name and we don’t learn a lot about her, although Weir didn’t have much to go on and this is probably why.

Likewise, however, I think Lady Katherine Grey’s story is actually incredibly sad, but I was unable to feel much sympathy for her in the end as I felt like we never got to know her fully.

Additionally, Weir tries to connect the two women by introducing some ‘paranormal’ activity, such as when Katherine Grey finds a pendant which belonged to Kate and is overcome with feelings of inexplicable horror when she tries to put it on.  I found this a little strange but was happy to roll with it initially although it never really went anywhere.  Katherine Grey’s interest in Kate seems to wane a lot towards the end and there is no real resolution which was disappointing.

I wasn’t aware of this at the time of starting the book but Alison Weir has written a number of non-fiction pieces about what may have happened to the young princes and although the discovery of this afterwards may be colouring my review I can’t help but feel now that this story was just another platform from which to suggest her theories.  As I said above, I think the two women’s stories could have stood alone without the need for the mystery of the princes to overshadow them.

It was an enjoyable book but I think that Weir overmilked the mystery of the Princes a little bit and it would have been a much more enjoyable read to just learn about the two women.  That said, if you are a fan of historical fiction then it is a good book, and very interesting to boot, especially if you have been reading any of Philippa Gregory’s recent work as this is the other side of the ‘White Queen’ and ‘Red Queen’ stories which covers the story from the perspective of the Wydevilles.

Our Day As Tourists