Earlier on in the year, we visited Delamere Forest to complete the Stick Man trail and so when I heard that the Forestry Commission had created Gruffalo Child trails in various forests around the country, I knew the kids would want to go.

The Gruffalo’s Child is one of Eli’s favourite books (although for some reason he insists on calling it The Gruffalo’s Darling) and when I revealed the night before that we were going he was immediately brimming with excitement, chattering nine to the dozen and absolutely not going to sleep.  In hindsight, I probably shouldn’t have waited until the kids were just going to bed…

Meg on the other hand was more concerned with a bigger question: what if we bumped into the Gruffalo?!

We arrived at Delamere Forest bright and early and met my parents who had been coerced kindly agreed to accompany us.

I’m glad we went first thing as the day turned out to be beautifully mild and dry (although we got extremely muddy thanks to the recent wet weather) and by the time we had finished the trail at around 1pm, the forest was incredibly busy with families trying to make the most of the nice day!

As with the Stick Man trail, this is a self-led activity, although you can purchase an activity pack for £2 which contains some colouring pages and information as well as a little task for children to complete as they walk around. 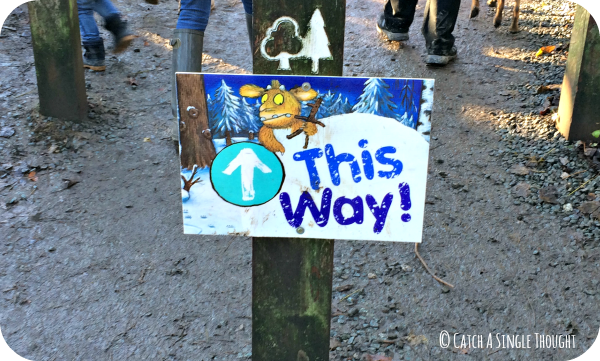 The task involves spotting letters hanging from trees and at the end rearranging them to form a word.  If you hand the sheet in you receive a little prize as well which is a nice touch.  Both Meg and Eli really enjoyed this task and it was a great way to practice some phonics with Eli as well (ever on the lookout for an educational opp…) 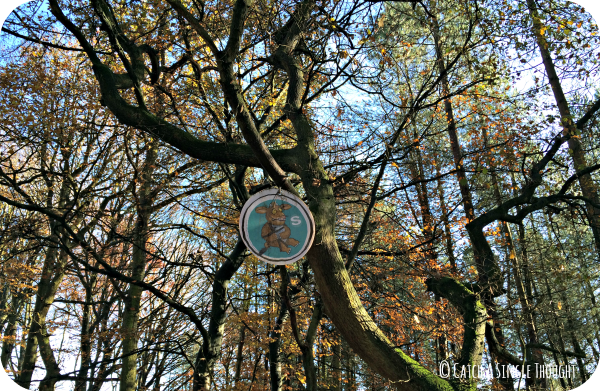 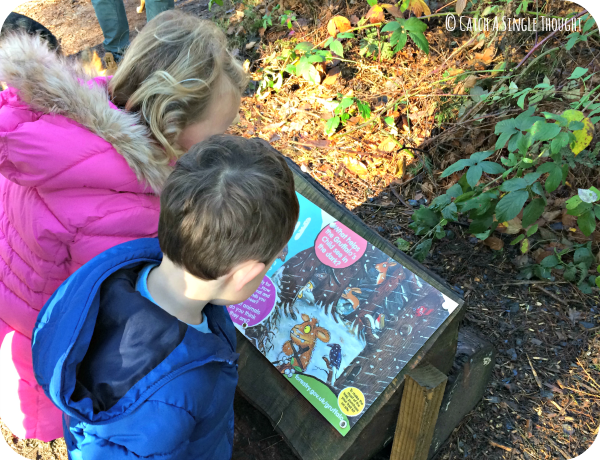 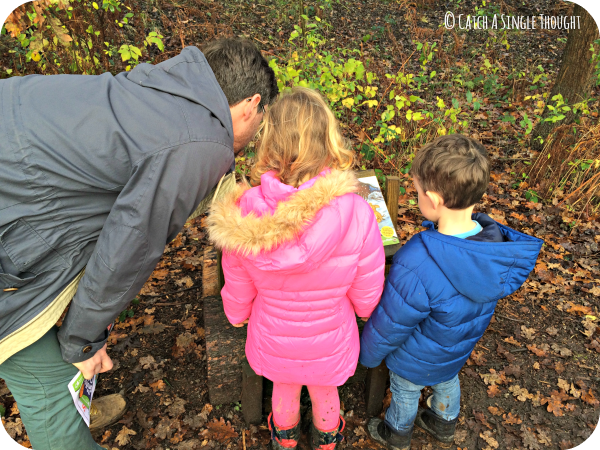 …or pretend to be a tree. 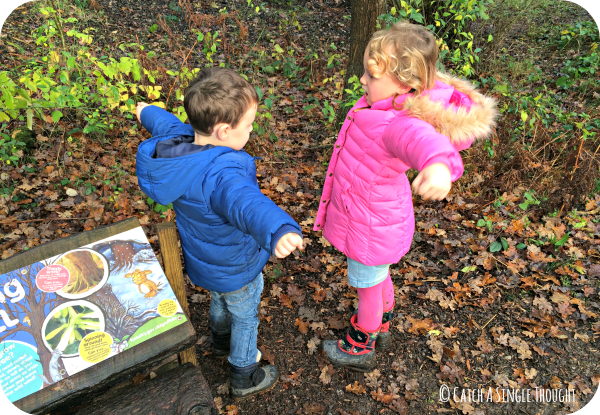 There are also some well known characters hiding in the trees as you walk around, so you need to keep your eyes peeled! 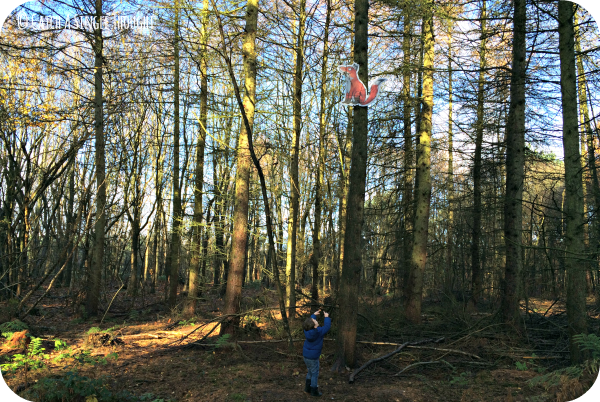 We went off track at one point and discovered someone had created a den with some sticks.  Immediately Meg and Eli were asking whether it was the Gruffalo’s den and went off to investigate. 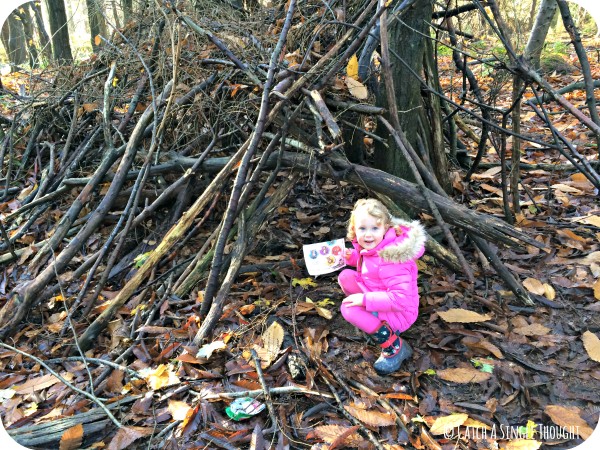 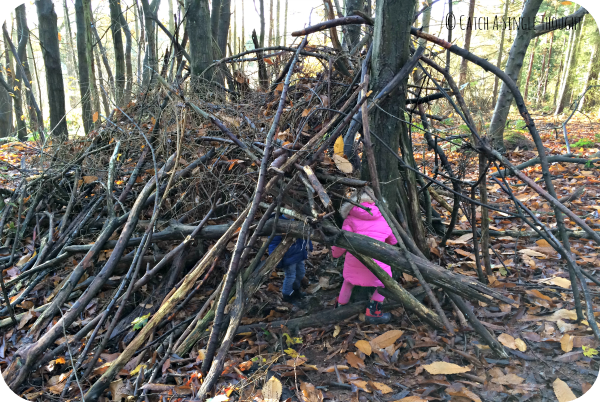 Cue Grandad making some very Gruffalo sounding noises and trying to trick the children which they, naturally, thought was hilarious. 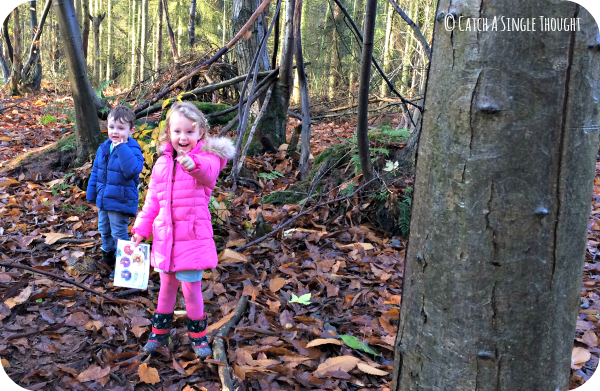 Best of all was that Delamere is one of the 15 sites (the trail is at 24 altogether) which has home to a 7ft wooden sculpture of the Gruffalo so we did get to find him after all. 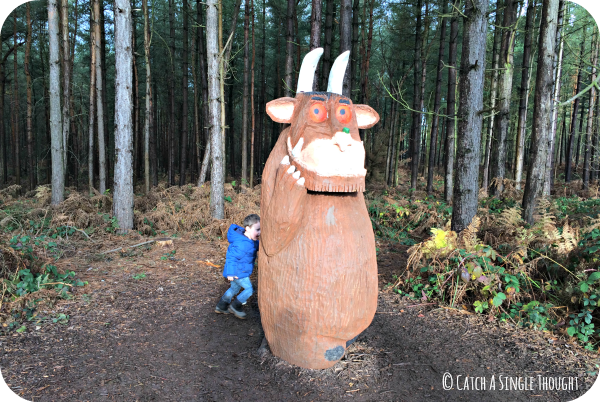 Once we had completed the trail we trooped back to the Cafe to have some lunch and collect the prizes which went down very well.

We even stopped along the way to have a go at making our own shelter with Meg determined to find the biggest branch she could! 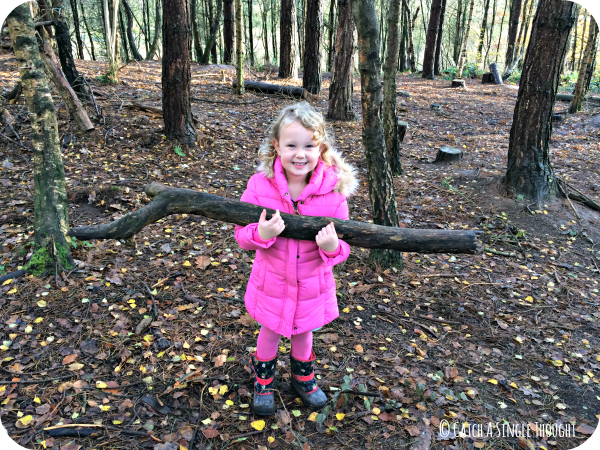 This is a great way to get children exploring nature, especially through the colder months.  Although we were lucky enough to get a good day, as you can see, we ended up more than a little bit muddy (as evidenced by Eli below) but we all thoroughly enjoyed it. 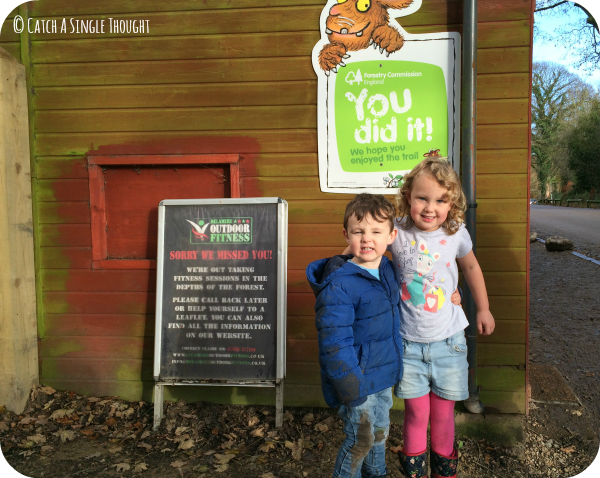 You can find your closest trail here, and they are in place until February 2015.