I can’t believe I haven’t reviewed a book since October!  Although I have been devouring books at a rapid rate and am now only two away from my challenge target on Goodreads, the last few weeks do just seem to have gotten away from me.

But, I have many great reads to share over the next few weeks, starting with Dan Brown’s latest book ‘Inferno’.  Read on for more… 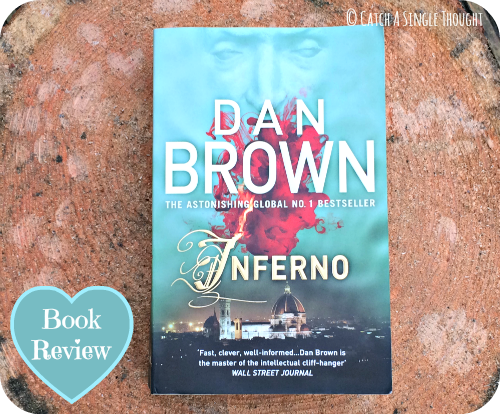 Inferno by Dan Brown
‘Seek and ye shall find.’

I have been a massive Dan Brown fan ever since I picked up Digital Fortress a couple of years ago but my interest really kicked in when he wrote Angels and Demons.  It was such a fast-paced and fascinating read that I recommended it to just about every person I knew (just don’t ask me about the subsequent films.  Tom Hanks as Robert Langdon?  Really?!)

Anyway, I have since watched out for the follow-ups and although I was left a little deflated after The Lost Symbol, I was desperate to read Inferno especially when everywhere I looked it was getting such fabulous reviews.  And yet…you can kind of sense what’s coming here can’t you?

The book starts with Langdon waking up in a hospital with a bullet wound to his head and apparent amnesia.  Langdon realises he has lost the past two days of his life and has, somehow, travelled from the campus at Harvard to Florence.  Whilst he is trying to recall what happened to him, an assassin turns up at the hospital and Langdon is forced to flee with a young doctor in tow called Sienna Brooks.

Langdon and Brooks then work together to solve the mystery of what happened to him, how he became entangled in a plot relating to Dante’s masterpiece ‘The Divine Comedy’ and how he can help to divert a huge disaster being unleashed on the world.

A typical Langdon scenario and yet somehow this book was lacking so many of the elements which made Dan Brown’s previous books so interesting to read.

One of the main issues is what made Robert Langdon such an interesting character in the first place.  He was a sort of academic Indiana Jones, who managed to escape the situations he found himself in with clear thinking and intellect.  In Inferno he seems to be known by everybody and anybody, and many people assist him in his quest.  He can simply walk into the museums and be recognised and this was ultimately quite boring.

Additionally, a lot of the book reads like a travel guide, and is incredibly dull.  If Dan Brown wanted to prove he had been to Florence before writing the book then he has done it well.  The problem is that it doesn’t flow in the story; there are several long, drawn out paragraphs which are just descriptions of buildings *yawn*

There is also a lot of repetition in the book which is very noticeable.  We are told several times that one character is a ‘facilitator’ for a company and we are bashed in the face with the vision Langdon first has on waking up (so much so that I could probably recite it verbatim); it’s as though Brown had a set quota for the number of words he had to write and couldn’t come up with original material.

So what did I enjoy I hear you cry?

Well, the overall premise of the book was good and I was willing to overlook the above mentioned points because, as I said, I am a Dan Brown fan.  I didn’t spot the twist coming at the end which is always good although that might have been because I was drowning in the descriptions of Florence’s architecture…

If you are a Dan Brown fan then you might want to give this a go.  If you’ve never picked up a Dan Brown book in your life then I would personally stick to Angels and Demons.  Brown’s writing has increasingly gone downhill since his first book which is a real shame.