The One Where…I Finish Writing A Book

Last Saturday I wrote the sentence:

‘Yes,’ she answered, ‘I really think I am.’
…and I sat, and I waited for the fanfare.  This was the final sentence in the novel which has taken me just short of two years to write.
Of course there were no fireworks and nobody burst through the front door with a bottle of champagne and box of chocolates in their hands congratulating me and handing me a book deal.  That’s the stuff of dreams.
But still.  Despite procrastination and hair pulling and weeks of abandonment and not being able to fall asleep without the characters wandering around in my head, shouting to get out, I have finally, finally finished writing my book.
It feels amazing.
At the end of January I entered it into a writing competition to win representation from an agent and I should hear back about that sometime next week (eek!) but aside from that I am sort of wondering what next.  Should I go self-published, should I at least try and find an agent willing to take a bet on my book?  I’ve never been very good at selling myself so the idea of trying to write a pitch which makes my book sound like the best book ever to be released and really, it’s a must-read, makes me cringe a little bit.  I’m not sure I could do it without feeling like a fraud.
In the spirit of still not being certain whether any of the words I had put down onto paper actually made sense I decided to take the plunge and pinged out a message on Facebook asking whether there was anyone who might possibly quite like to give it a go. 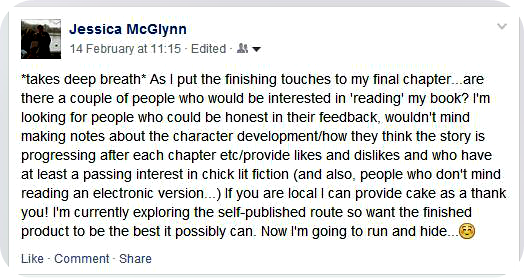 I clicked ‘send’ and then obsessively checked my phone every 5 seconds for the next 10 minutes as I worried that nobody would bother to respond and then amazingly 15 people said they wanted to read it.  I won’t lie, it’s possibly the most terrifying thing I have ever done sending it out.  I was immediately back in the world of the obsessive, refreshing my emails to see whether anyone had managed to read it in the half a day I’d given them.
So far, one person has finished it and I’ve had dribs and drabs of feedback.  Mostly positive, some constructive but the overwhelming sense is that actually…it might not really be all that bad.
So I guess what I am saying is:  HOLY MOLY, I’VE FINISHED A BOOK AND I MIGHT ACTUALLY BE ABOUT TO PUBLISH IT.
Squeal!