We have been more than lucky in the last 6 years when it comes to childhood illnesses.  Aside from the usual snuffles and sniffles, our kids don’t really ‘get’ sick.  I think Meg has vomited once in her whole 6 years and Eli the same.  Which is quite lucky really as I am one of those unfortunate souls who ends up being sick alongside the person being sick, just because they are being sick!

Chicken pox is one of those childhood illnesses which almost every parent expects to have to deal with at some point.  Although I have to admit I was beginning to think my two were immune.  Having both been in nurseries from a young age we’ve had plenty of letters and notices about chicken pox doing the rounds and yet, Meg and Eli never seemed to catch it.

So when Meg woke up with a small rash around her ears I thought nothing of it and sent her off to school as normal.  We’re all a bit cold-filled at the moment and she often has a viral rash which accompanies her runny nose so it didn’t seem to be anything too worrisome.  I wasn’t even that concerned when she said she didn’t feel like going to gymnastics as unusual as that was.  It happens to all of us sometimes.

However, later in the day when she had been home from school for a while she suddenly came running down the stairs exclaiming about something on her neck.  I took a look and suddenly, there were a whole load of spots including one rather large, angry looking one on her shoulder which had clearly been scratched.  Uh oh.

The thing which threw me was how slowly the spots appeared.  I asked around and most people agreed that if it was chicken pox, within a couple of hours she would be covered.  Not Meg.  I don’t know whether she has a super kick-ass immune system or just likes to do things in her own time but the following morning she hardly had any spots at all.

I wondered aloud whether it might be chicken pox which got Meg excited.  Did she have to stay off school?  Would we have a special girlie day, just the two of us?  Could she bring her bed downstairs and lie down on the sofa?

I wanted to be sure though and as the one on her shoulder didn’t look so hot so we took a fun trip down to the GP surgery where we sat in a darkened spare room, before they confirmed that it did look a lot like chicken pox, and that they’d actually seen 3 other children from her school (in her class as it transpires) who also had chicken pox.  Great!  They loaded us up with calamine and paracetamol and sent us home.  The nurse suggested I rub Eli up against Meg whilst I was at it to ‘kill two birds with one stone.’  To be honest, they are always clambering over each other so if he doesn’t turn up spotty in a week or so he’s got to be the wonder-kid.

A quick stop off at the pharmacy for our medicine and to grab some Frozen stickers to cheer up the patient who declared, ‘Mummy, I don’t think I like chicken pops any more.  I want to go home,’ and she was back on the sofa, snuggled up under her duvet and feeling very sorry for herself. 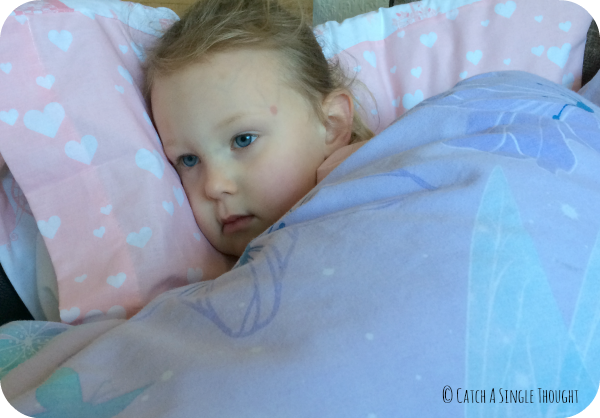 She perked up a while later when offered her stickers and we had a little giggle over playing ‘dot to dot’ applying calamine to all the spots we could see but it didn’t last long before she had retreated into a little bundle again. 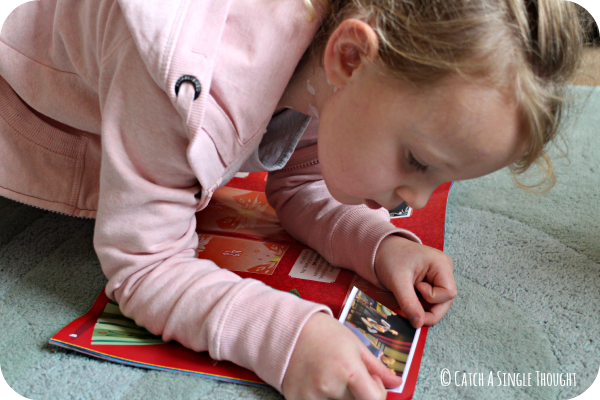 This morning she is complaining of feeling unwell so I’m going to keep an eye on her.  I know this is a routine illness which most children get at some point but it’s still not nice when it’s your child is it?  Not to mention the fact that having just survived half term, we are now all stuck indoors for another week or so!  If anyone finds my sanity, please could they send it back?!

I think lots of cuddles are in order, and maybe some chocolate too!  For Meg, obviously, not me.