Regular readers will know that last November I was invited to go out to Uganda with the anti-poverty charity Send A Cow to see the fantastic work they are doing.  It was an amazing and life changing experience so when they got in touch to ask whether I would like to work with them on the Live Below The Line campaign this year, I absolutely said yes (something I may come to regret later this week!)

For those who haven’t heard of Live Below The Line: it is an international campaign which has been designed to raise funds and awareness for anti-poverty charities, like Send A Cow.  In the UK there are over 30 charities involved.

Send A Cow are focussing their campaign on Burundi, the hungriest country in the world.  Send A Cow have only just begun to work in Burundi but the need is huge; 67% of the population is malnourished, which is around 1.5 million people.  The impact Send A Cow can have in this country is incredibly significant, if my experience in Uganda is anything to go by, so I am excited and keen to help raise awareness, and much needed funds, for this campaign in any way I can.

The LBTL challenge is that you eat and drink on just £1 a day for 5 days from 27th April to the 1st May and that you fund raise (if you wish) alongside this.  As it is launch week for the 2015 campaign today, I have been asked to take part this week.

I am going to be keeping a video diary for those who want to hop over to my Youtube channel (day one is here) as well as a written diary, just in case I daren’t bring my caffeine-depleted self to face the camera!

Thoughts on Day One
5 days seems pretty easy and I felt fairly confident when I woke up this morning, until I realised that was largely to do with the fact that I’d accidentally had my morning cup of tea!

I know and understand that a campaign like this can’t ever replicate poverty and hunger in the developing world, how could it?  But it has already made me stop and think.  When I was meal planning yesterday I was struck by just how much choice we have when it comes to food, even when shopping on a limited budget.  It isn’t just a case of having the required money to purchase food, it’s the level of choice and variety too such as fresh fruit and vegetables which we have a complete access to.

Breakfast was half a banana and some yoghurt, actually an improvement on what I eat for breakfast which is usually nothing as I’m so busy getting everyone ready to go out to school and nursery.  Not having a cup of tea mid-morning was hard but not terrible, it’s part of my routine as much as anything and although my concentration wavered a little as the morning progressed, it was manageable.

However, it’s been a couple of hours since lunchtime now and I am feeling as though my confidence may have been slightly misplaced: the vegetable soup I made was vile!  It tasted so bland and I’ve over-committed my food supply and made enough for the next 5 days.  I think I’ll have to compromise somewhere else and use something to liven it up a little to try and save it…otherwise the dog will be eating well for the next week.  Meg is still off school with chicken pox and making her dippy eggs and soldiers set my stomach rumbling; I should have chosen eggs over soup! 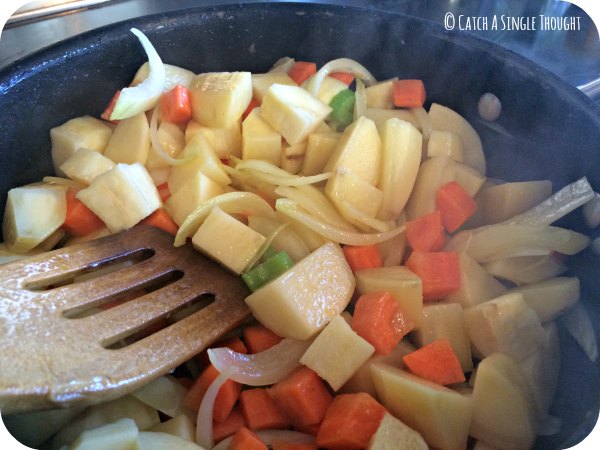 I’m in sore need of a cup of tea and am not looking forward to heading out to pick Eli up from nursery without having had my usual afternoon snack.  It also doesn’t help that Meg is crunching some crisps right next to me (why do kids have to sit so close?!) – I’m wondering whether it’s cheating if she voluntarily hands me one without me asking….thoughts?!

Food on Day One
Breakfast: Half a banana and yoghurt – 35p
Lunch: Vegetable soup (potatoes, carrots, parsnip, celery, onion and stock cube) – 13p at serving providing I eat the remainder for the rest of the week…otherwise I’ve just thrown 67p down the proverbial drain.
Dinner: Pasta and tomato sauce – 16p on the basis that I will get 4 more meals out of it.

So that’s Day One!  I’ll update you on how dinner went tomorrow.

Whilst I’m not specifically trying to fundraise for this campaign, if you wanted to donate something for my efforts, or to find out more about Live Below The Line then you can do so here.