I am next to useless at waiting.  For anything.  It doesn’t matter whether we are talking about a doctor’s appointment, a reply to an email I’ve sent or for my dinner to cook.  I am the woman who starts shuffling in the queue at the supermarket if I’ve had to stand in line for more than 2 minutes.  The lady who sighs loudly if the person in front at the ATM has more than one card to use.  The mama who repeatedly looks at her watch whilst her children play at the park.

You get the idea.

Although I have, in essence, finished the manuscript for my first book I am still making minor adjustments to it so that by the end of April it will be in the best shape possible.  Why April I hear you ask?  Well, whilst I am still hopeful that I will secure representation from an agent in the meantime I am making plans to self-publish.  You know, to get it ‘out there’.

I am realistic that I may never secure myself an agent or a publishing deal, or at the very least that it may take a number of years until my manuscript is noticed and with self-publishing being as simple as it is now I don’t see the harm in giving it a try.

But, oh the waiting…

I won’t get the completed illustrations for the cover until the end of April so there’s absolutely nothing I can do in the meantime other than fiddle with the finished work.  Which is never a good idea.  It’s like picking at a thread hanging from the sleeve of your favourite jumper.  You pick and pull and then all of a sudden it’s longer than it was a few minutes before.  Of course there’s no way you can leave it alone now and so you continue until the whole thing has unravelled and you sit and wonder why on earth you started fiddling in the first place.

I have been doing a lot of walking.  The beach has become my best friend. 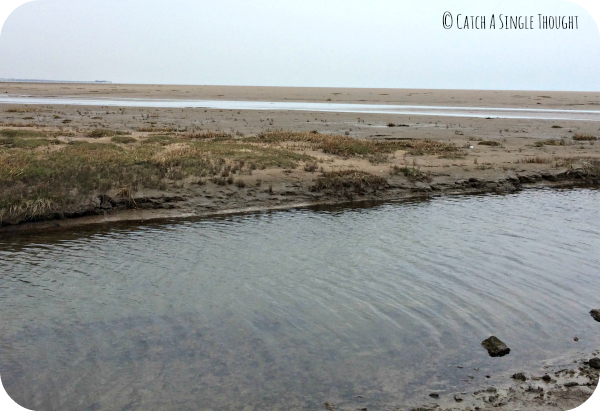 Walking is my favourite activity and allows me to wander in my mind without being anywhere near my computer to cause any real damage.  I can take an idea and mull it over, decide whether it’s going to work and then either dismiss it (more often than not…) or really consider how to fit it into the existing story.

My BETA readers are probably going to be shaking their fists at me as I have made quite a few adjustments to the original since sending it out to them in February.

I suppose what I really should be doing is getting on with my second manuscript; especially since the characters are shouting rather loudly inside my brain most of the time but somehow I can’t bring myself to quite let go of my first baby just yet.  Perhaps when I have finally clicked ‘publish’ that will happen.  Or maybe it will be the case that I will always wake up at 2am with the realisation that if I had just tweaked the story one more time then it would have been perfect.  Who can say?

But for now I wait.  I fidget.  I pick.  I wander.  And I hope that April hurries itself along.