March has been a good month for reading; I think my new determination to get some sleep by getting early nights, away from the television/my phone/the ipad has done wonders for my book reading.

I know it’s not quite the end of the month yet but I have just started a mammoth book by Ken Follett so I know there won’t be any others to share with you until the end of April {seriously, how is it almost April?!}

Here’s what I’ve read in March:- 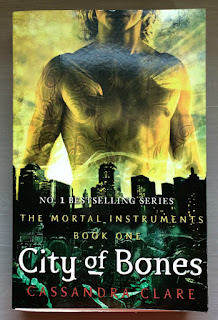 City of Bones (The Mortal Instruments #1) by Cassandra Clare – this was recommended to me by a fellow blogger when we realised we had similar taste in books.  It is the first in a rather long series and is a dystopian/fantasy novel which is rather hard to sum up in just a short paragraph.  Think warlocks, vampires, faeries and all sorts of fantastical beings living alongside humans, and Shadowhunters, a group of warriors dedicated to ridding the world of demons.  I’ve seen this book taking some flack on review sites but I found it to be fast-paced, interesting and quite gripping.  Okay, it’s not necessarily an original idea but I still thoroughly enjoyed reading it and have bought the next few in the series.  I should also add that if you have seen the film, don’t let that put you off reading the books.  They were nothing alike.
Star rating: ****

Me Before You by Jojo Moyes – I should have known before I ever started this book that it would leave me in tears.  I don’t think I’ve read a Jojo Moyes book which hasn’t made me cry yet!  Lou Clark has lived in the village all her life; she knows how many steps there are between the bus stop and home, she loves her job working in the local tea shop and her life is just the way she wants it to be.  That is, until the tea shop closes down and she is forced to reassess where she’s going in life.  She ends up taking a job as an ‘aide’ for Will Traynor, a successful, adventurous businessman who was injured in a motorcycle accident, completely throwing his world upside down.  He has completely lost his desire to live so when Lou bursts into his life, the results are completely unexpected.  For both of them.  I’ll admit that I didn’t particularly like the ending of this story but I thought it was extremely well written, moving and a challenging subject.
Star rating: *** 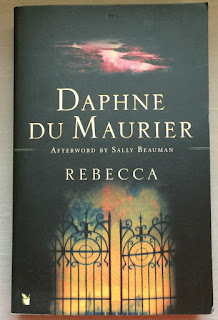 Rebecca by Daphne du Maurier – This was my chosen D book for A to Z authors after reading the review on Claire’s blog.  It’s probably not a book I would have picked up otherwise but I’m glad I did as it’s quite different from the usual stuff I read.  The story begins in Monte Carlo, with a young girl being swept up in a whirlwind romance by Maxim de Winter.  She accepts his sudden marriage proposal, walking away from everything she knows and stepping into the strange and different world of life at Manderley.  This is a classic tale of mystery and intrigue, coming of age and romance.  The only reason I marked it down to 3 stars was because I guessed the big twist at the end, which sort of spoiled the surprise.
Star rating: *** 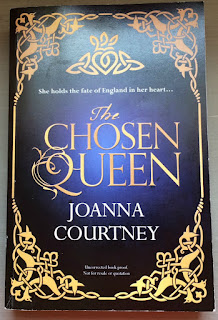 The Chosen Queen by Joanna Courtney – I was lucky enough to be sent a proof copy of this book which will be published in early May.  It is the story of the events leading up to the Battle of Hastings in 1066 and is a beautifully woven tale with likeable and believable characters.  I honestly found myself wishing for some creative licence on Joanna Courtney’s behalf as I loved King Harold and actually found myself in tears at the end of the book, even though I knew what was coming!  I would highly recommend buying this book in May when it is released and will hopefully have some more information closer to the time to share with you on this.  Absolutely a 5 star read, without a doubt.
Star rating: *****

A Place For Us by Harriet Evans – I picked this book as I was struggling for an E in my A to Z Authors challenge and I only finished it at the end of last week.  It’s kind of left me not sure how I feel about it, I can’t decide whether I liked it or not!  Martha Winter decides to blow her family apart on her 80th birthday by revealing a secret which has long been kept hidden.  She has spent the last 50 years building an idyllic family life with her husband David and their 3 children at their home of Winterfold.  As the story unfolds, we discover that each member of their family is harbouring their own secrets, must face up to their pasts and come together in order to heal and move forwards.  I thought the story was well written, with believable characters but my issue is that there were so many threads I felt like you only ever got half the story for each person.  I was left wanting to know more, whilst at the same time not wanting to as so much of what they were hiding was dark.
Star rating: ***

Have you read any good books this month?  I always love to hear recommendations.

Linking up with A-Z Authors and Read With Me.