We were recently sent the Wubble Bubble Ball for review: an inflatable ball which is made from a strong, durable and super stretchy material.  It takes it’s name from the fact that it looks like a bubble but plays like a ball…

* You can buy it with or without a pump and it is very easy to inflate.  The pump doesn’t come with batteries so we used a pump from our airbed and it took about 5 minutes to inflate.
* It is okay to use indoors or outdoors (although obviously be careful to keep it away from any sharp objects).
* It comes with a deflation tool so you can simply put it down when you’ve had enough play and store it easily until next time.
* Having seen a few reviews where the Wubble has burst I’m not sure what we did differently other than not inflating it to its fullest to give it a bit of ‘room’.  You can inflate it up to 90cm but we didn’t as we were nervous about it bursting.
* It is aimed at children aged 8 and above but Meg and Eli had no trouble playing with it under adult supervision.
* It can be purchased from all major toy retailers.

We had the Wubble inflated in the house for about a week and Meg and Eli had loads of fun playing with it but really the fun is when you get it outside.  Once we were convinced it could handle a bit of rough and tumble we decided to brave taking it outside and chose somewhere we knew there was a wide open space which meant we could give our Wubble a good road-test. 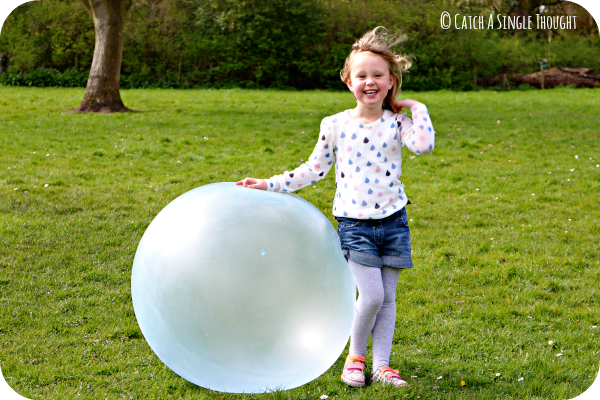 One of my favourite moments was when we were carrying it from the car (inflated) and we passed a little girl who was about 3 years old.  She just stood, open-mouthed and said ‘wow, look at that bubble!’ as we passed.  Too cute!

We had lots of enquiries from other impressed parents as well whilst we were playing with it and plenty of people stopped to see what we were doing.  It was great as Meg even made a new friend, all from taking a giant bubble ball out with us.  Who would have thought?! 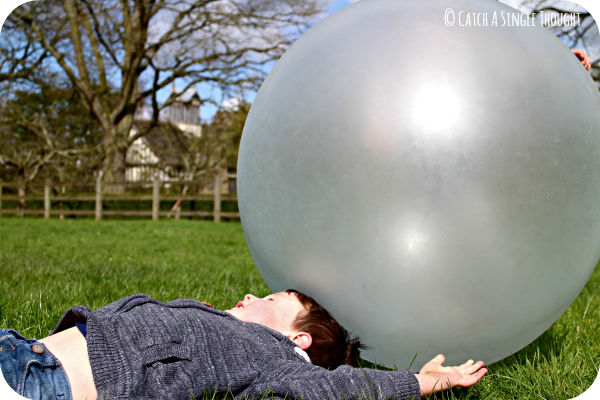 We did have a few hairy moments when we thought our Wubble was a goner as it catches the wind really well and it got swept off but we managed to catch it.  Me chasing a giant bubble ball across an open field at breakneck speed certainly amused a few onlookers anyway!

The fact that it’s lightweight meant both Meg and Eli could throw it high in the air, and the flexible material means it’s easy to grip as well.  Interestingly, it is also quite soft to the touch. 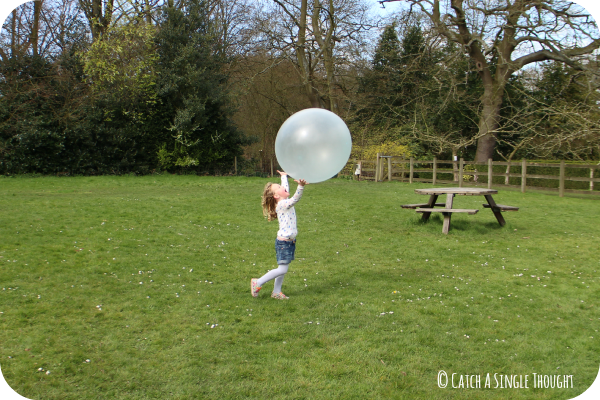 As you can see from some of the photos, there were a few picnic benches dotted around and it did collide with these a number of times.  No damage was done although I wouldn’t hold my hands up and say that means it is invincible.  It is the same as any inflatable product but maybe because we hadn’t got it up to the 90cm it had a bit more give and didn’t burst.  I don’t know.

What I loved was that it was a great way to get the whole family playing together.  Often Eli can’t keep up and loses interest but he loved chasing the Wubble down and when James set up a little relay race for them both to roll the Wubble round obstacles they couldn’t get enough of it. 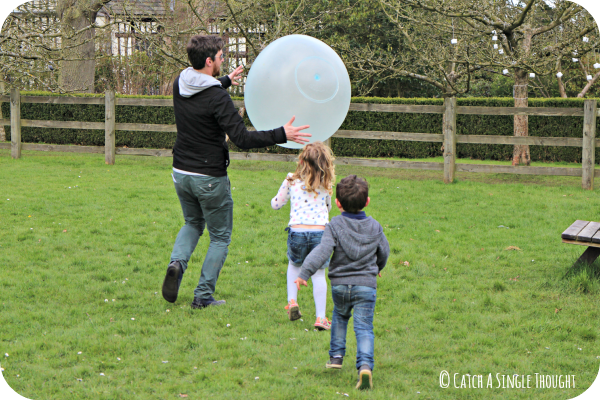 In terms of durability, I don’t know how long it will last.  We have had the Wubble for 4 weeks now and although it has deflated and needed to be blown up again it is still going strong.  Our next mission is to try it out at the beach although I think we will have to be extra careful as there are obviously plenty of ways in which it could get spiked.  I’ll let you know how that turns out!

You can see a snippet of it in action here as well, watch the whole thing or skip forward to 1:21 to see me running.  It’s attractive.