Having done so well in March, by direct contrast April has been a terrible month for reading!  I want to say it’s because I was eye-deep in proofreading and editing my own book but I just haven’t felt like picking anything up.

It started when I ground to a halt over my F for the A-Z authors challenge.  Ken Follett was too demanding, Sebastian Faulks ‘One Week in December’ I just couldn’t seem to get into and I completely drew a blank at finding any other author’s I wanted to read.

So, I have managed a total of two and a half books this month…and none of them fulfil my F so if you have any ideas of a book which might catch my interest send them my way please! 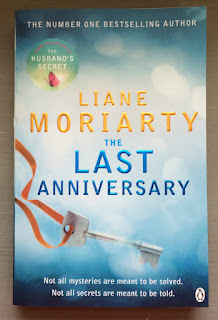 The Last Anniversary by Liane Moriarty – as a big Liane Moriarty fan I had high hopes for this book.  It is the story of Sophie Honeywell, a singleton who randomly inherits her ex-boyfriend’s aunts house on Scribbly Gum Island; home of the infamous Munro Baby Mystery.  Sophie has always been fascinated by the Mystery and jumps at the chance to move onto the island and begin a new life but it seems as though everyone in the family has something to hide.  As Sophie’s life becomes ever more entangled she begins to realise that sometimes you have to take control of your own destiny.  I really enjoyed reading this and although I don’t think it is as good as some of her later work, I found myself eagerly turning the pages wanting to see what secrets would be revealed next.
Star rating: *** 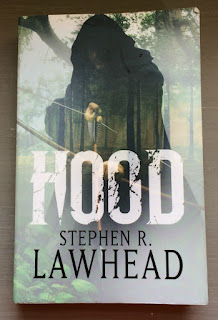 Hood (King Raven #1) by Stephen R Lawhead
I read this sometime last year and the quickly bought the remaining two in the series but didn’t get around to reading them so when I found myself dithering with nothing to read I thought I’d pick it up again and dive into them.  I love Stephen Lawhead books I think he has such a magical way with words and time and again I find myself completely drawn into the story, oblivious to everything and everyone around me.  The King Raven series is Lawhead’s take on the traditional Robin Hood tale and you can read my full review here.
Star rating: **** 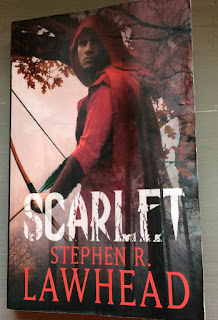 Scarlet (King Raven #2) by Stephen R Lawhead
This is a continuation of the above book but told from the perspective of Will Scarlet rather than Rhi Bran.  I have to admit I found this a little difficult as it doesn’t read as well as the first (could just be me though) and is mostly told in the form of Will telling his story whilst imprisoned.  Perhaps it is more than you are reading about everything in the past tense as I have found it has picked up now I am just about to finish.  Although I know I should carry on with my search for an F book I’ll be reading the third and final instalment of this series ‘Tuck’ next.
Star rating: ***

That’s it for this month!  Hopefully May will be more impressive.

Linking up with Read with Me.