This year Meg was determined that she was going to have the best birthday party ever.  Those who regularly read the blog will know that her plans have been wild and extravagant covering everything from horse drawn carriages to sparkly party dresses.

Whilst we couldn’t quite keep up with all her demands, we were confident we could give her a special day to be remembered, especially when she mentioned that she’d quite like to learn a ballet routine with some of her friends.  There was a theme we could work with!
I set to work, diving into all things tutu related; think lots and lots of pink.  Kate from Feather Grey Parties helped with the accessories, sending us some of their new gorgeous pink and gold themed party pieces which really got the ball rolling.  They were really high quality and although I could have got lost in trying to decide which of the Feather Grey Party themes would work best I’m glad we went for the Pink Sparkle Party.  Pink and gold worked perfectly alongside the ballet theme and inspired a number of the other decorations that we used. 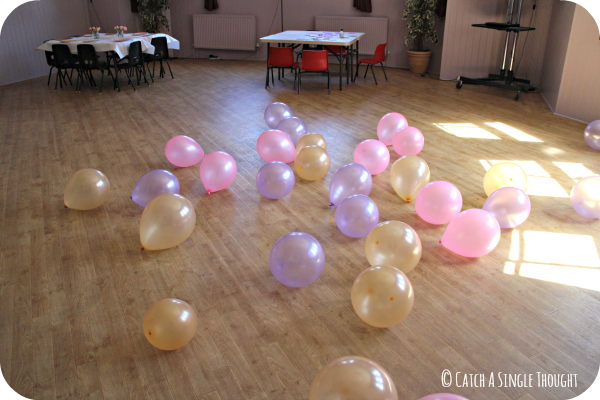 I bought a number of different coloured tutus and set up a little dressing up stand; the girls loved rooting through the tiaras and skirts, trying different ones on and looking at themselves in the mirror.  Apart from the tutus, this stand was made up entirely of items from our house…a very cost-effective little station which kept them occupied whilst we waited for everyone to arrive. 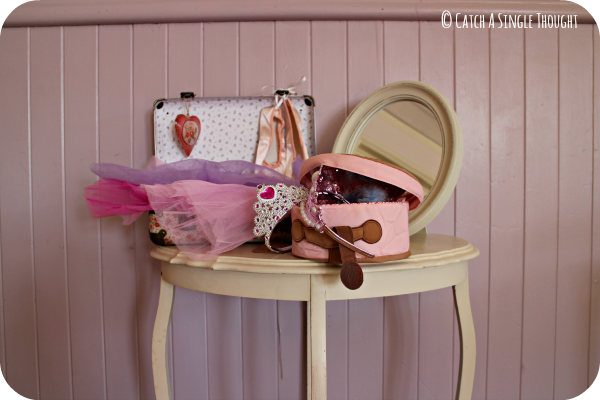 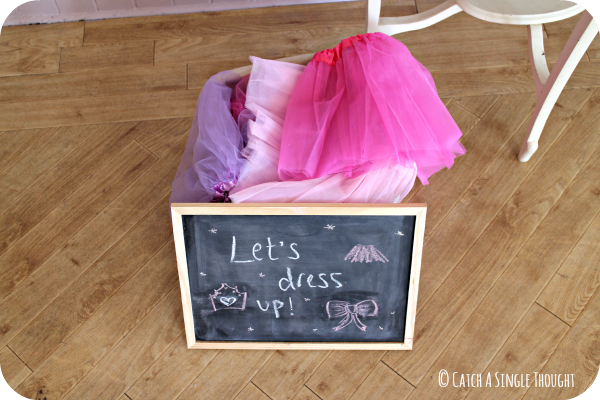 We paid for someone to come along and teach the girls some ballet steps from babyballet®; Miss Katherine was absolutely brilliant and the girls took it so seriously!  She had them all in first and fifth position and doing demi-pliés by the end and they continued to practise their moves long after she had said goodbye.  She also played a number of games with them and was just really engaging, knowing how to keep them all involved and concentrating on what they were doing.  It was magical to see, especially knowing that this was something Meg had really wanted. 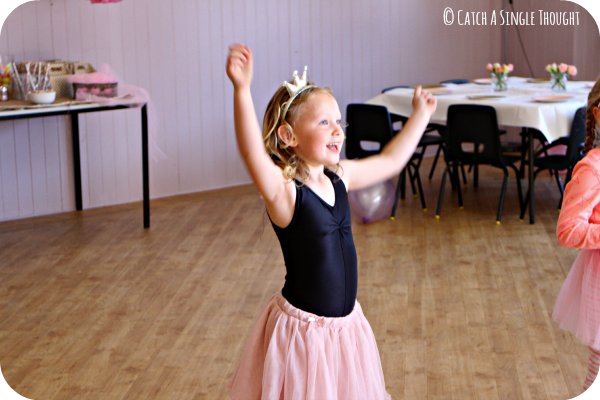 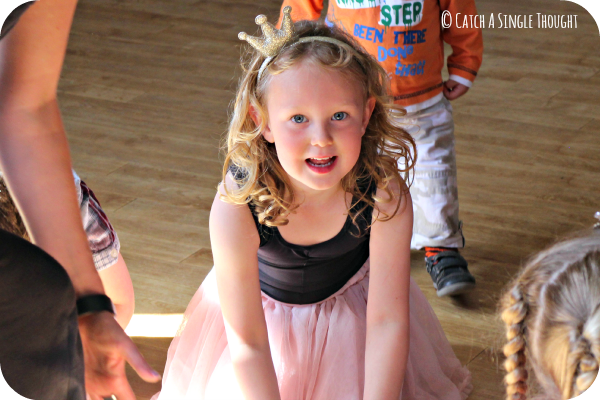 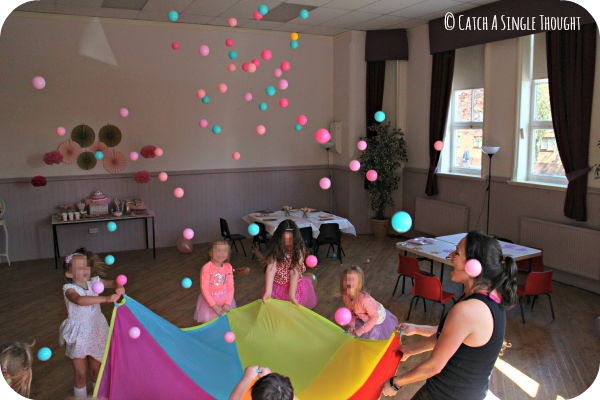 Although we also had some wand making and games lined up, the babyballet® section was by far the favourite and seeing Meg’s face when Miss Katherine walked in (we had left that part a surprise) was priceless.  She has been performing ever since.  I think we may be looking up local ballet classes in the not too distant future. 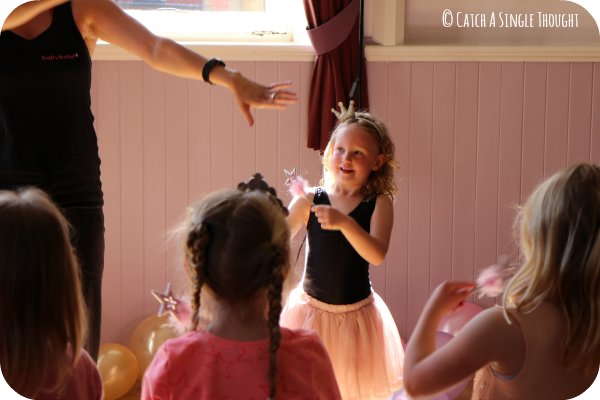 I didn’t manage to capture any photos of the wand making as I was too busy trying to ensure that nobody stuck their fingers together but we basically bought some pre-cut sparkly foam pieces, some dowel and some ribbon and PVA glued it all together, tying the ribbon around the dowel stick at the end.  I had hoped this task would last a little longer than it did but each of the girls loved making their wands and the only hard part we found was trying to stop them whisking them off and around before they had fully dried!
The cake table was also a favourite; lots of parents commented on it and the girls were dying to nab the treats from the second they walked in.  I made the tutu which tied underneath a plain cake stand myself using tulle and ribbon, and then just used bits and pieces from around the house to bring little extras and sparkle to the table. 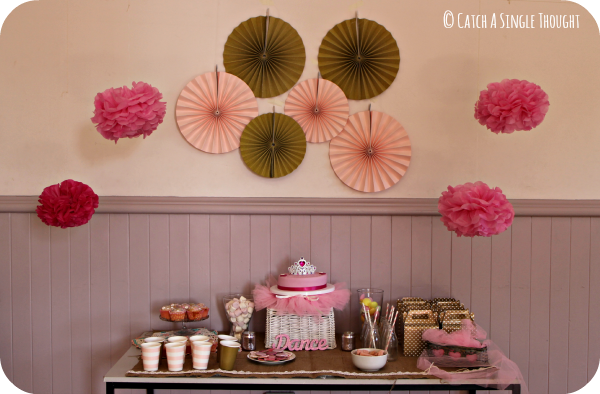 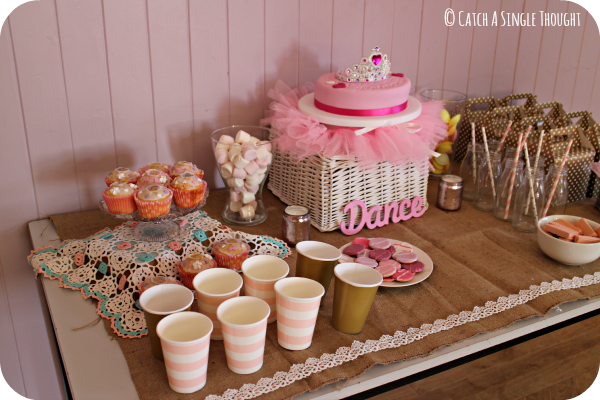 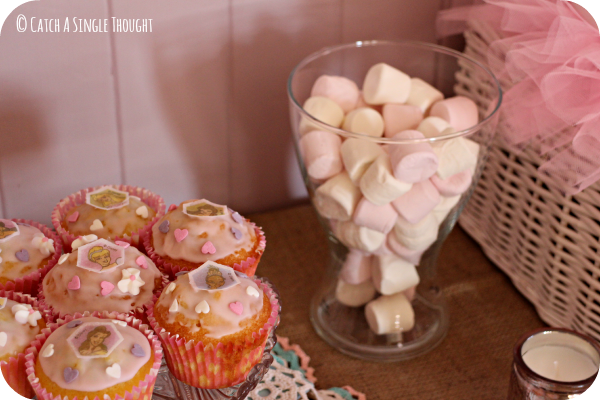 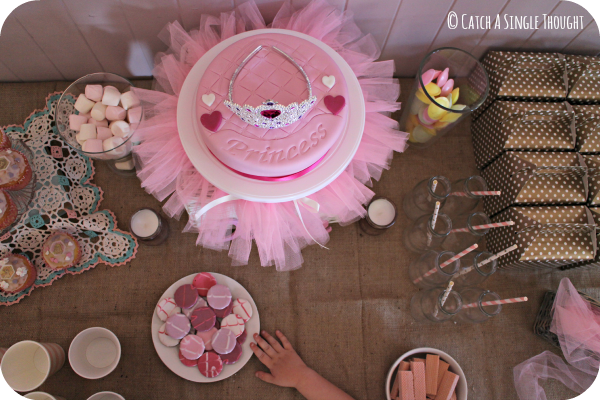 Unfortunately I didn’t make the cake myself as I think that would have just been one step too far for my sanity!  It is just a standard supermarket princess cake.  Nobody seemed to notice so shhhh! 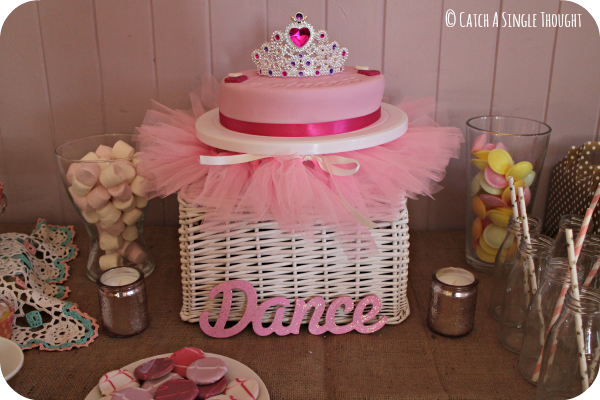 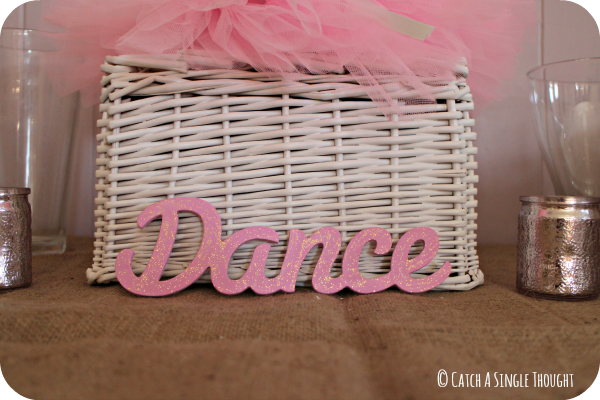 For the food we decided pre-filled lunchboxes would be the easiest option.  We packed them beforehand with crisps, yoghurt and a chocolate treat and then made heart shaped sandwiches with a variety of fillings which we then offered out.  We also filled the cups from Feather Grey Parties with grapes and strawberries to try and inject something healthy amongst all the sugar. 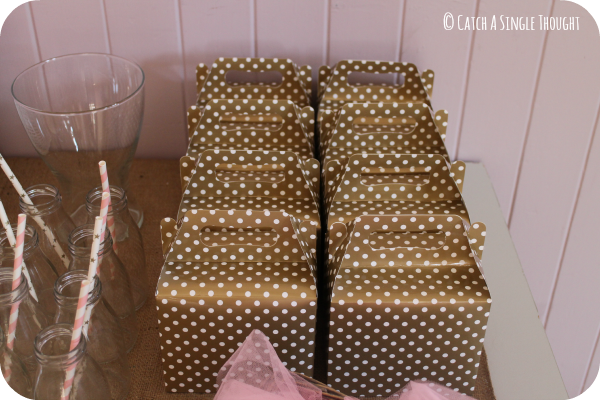 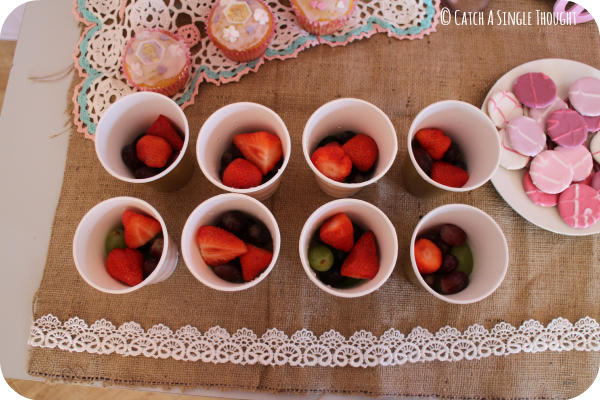 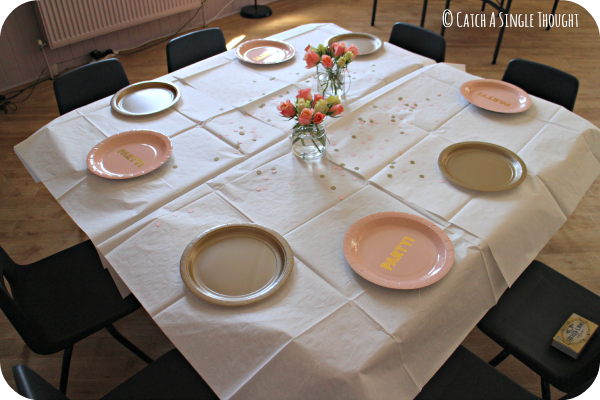 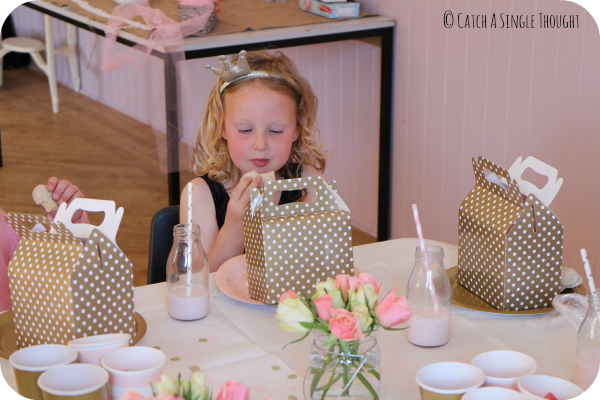 The party bags were provided by All About Party Bags who offer a range of pre-filled party bags and boxes.  Naturally we chose a ballerina themed bag which came with a set of stickers, a chain bracelet and some adorable charms and a selection of party sweets as well.  It cost just over £40 for 12 pre-filled bags and they came packed up and ready to go; perfect when there was so much else for me to be thinking about on the day.  The bracelet and charms got lots of compliments and Meg has loved wearing hers.  They have all kinds of themes so are well worth checking out. 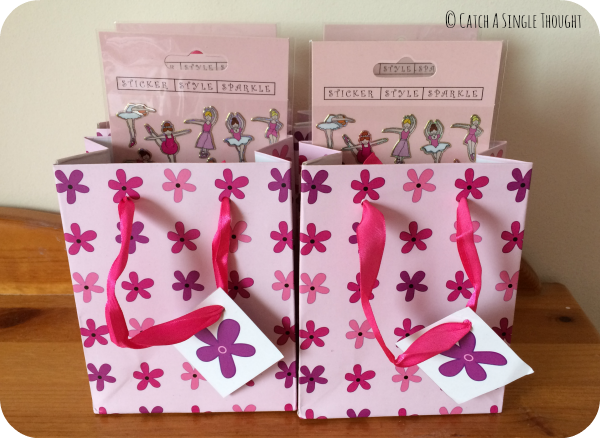 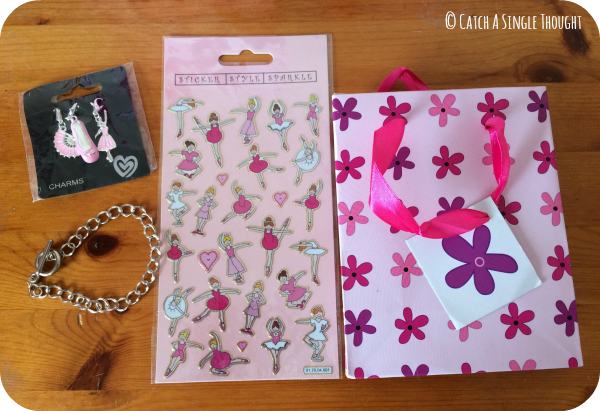 The final element to the day was the nail station.  Meg’s auntie very kindly offered to paint nails so whilst the other girls danced amongst bubbles and balloons, she pampered each one, very willingly painting lots of different colours.  It was a lovely addition and I hope each girl went home feeling like an extra special little lady. 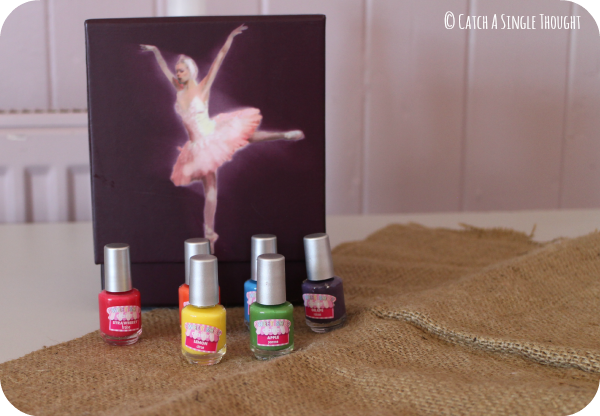 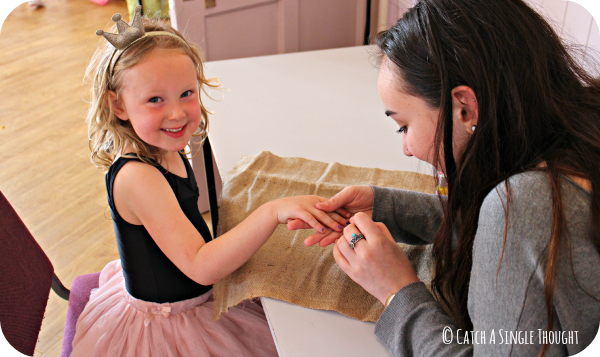 I have to say a huge thank you to Feather Grey Parties for their stunning party decorations and All About Party Bags for their contribution to the day.  You made a very sparkly party extra magical and I wouldn’t hesitate to recommend both to anyone looking to plan a birthday party (or any special celebration) in the near future.
Meg had an absolutely wonderful time and I truly hope we made her sixth birthday everything she wanted it to be.

Secrets of the River is here!