A Luxury Holiday in the Maldives

For today’s travel Tuesday post we are going to take a bit of a step back in time to when our holidays were all about relaxing in the relative peace and quiet on the beach! 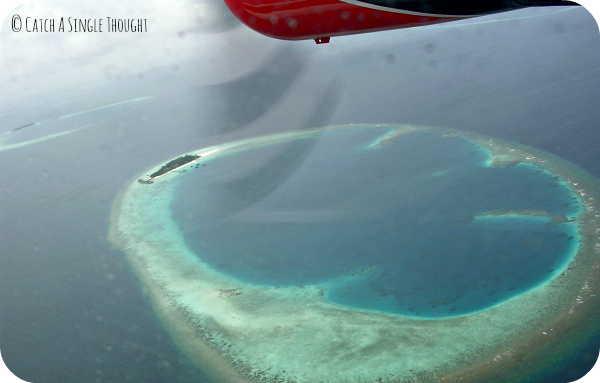 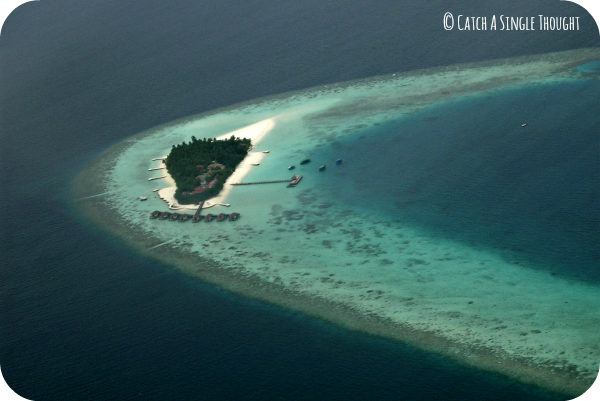 We flew from Manchester airport to spend a two week, all inclusive holiday at the Maayafushi resort in the Maldives.

When you picture the Maldives, I am sure certain things come to mind: stunning stretches of white sandy beach, crystal clear water, soaring temperatures…we were expecting all that and more so when we arrived in the middle of a tropical storm having circled the airport at Male for nearly two hours because we were unable to land, our expectations were sort of diminished. 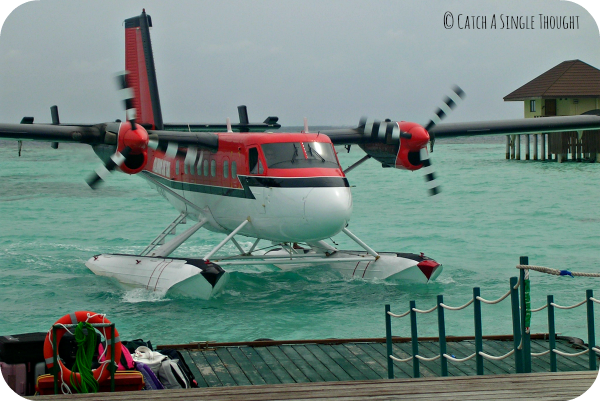 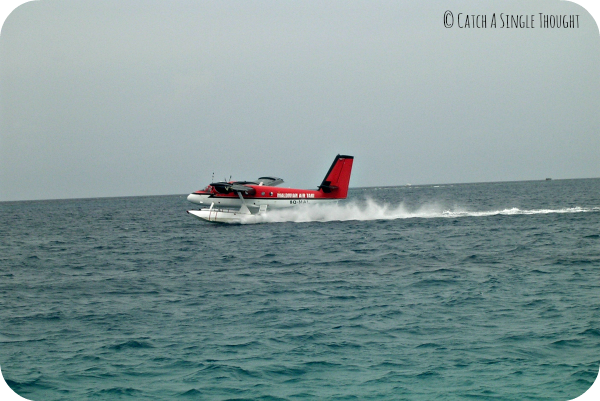 You land at the main airport in Male and then you usually have the option on booking of choosing whether to reach your specific island by either speedboat or seaplane.  We opted for seaplane as we felt it would be a bit ‘smoother’ than a speedboat journey.  It was certainly smoother but incredibly cramped and because of the tropical storm we had a delay in setting off.  This was nothing compared to the plane which landed after us; by that point the sea was so choppy the plane couldn’t land and the passengers had to jump from the plane into the sea and swim to the island…can you even imagine?! 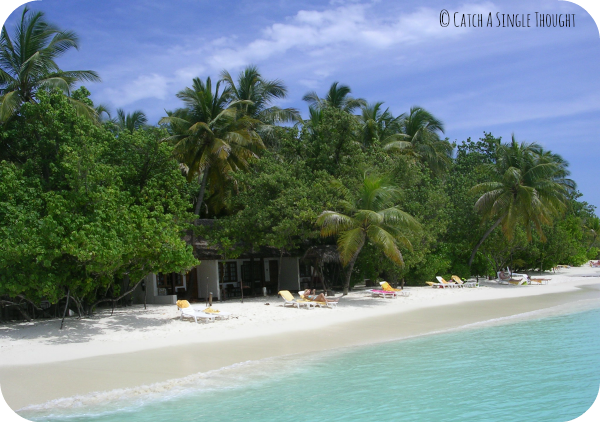 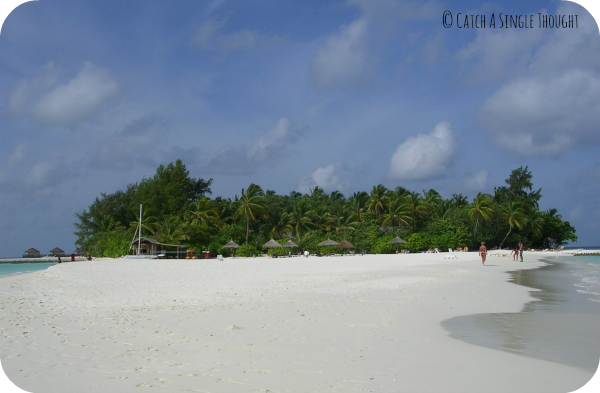 Arriving on the island we were welcomed with a hot towel and a refreshing cocktail before being led to our beach bungalow.  There is a choice on the island of beach bungalows in the traditional Maldivian style or the overwater bungalows.  Things were starting to look up!

The bungalow was basic; a room with a bathroom and limited facilities but it was less than 20 steps to the waterfront and we had our own private slice of beach which was ideal. 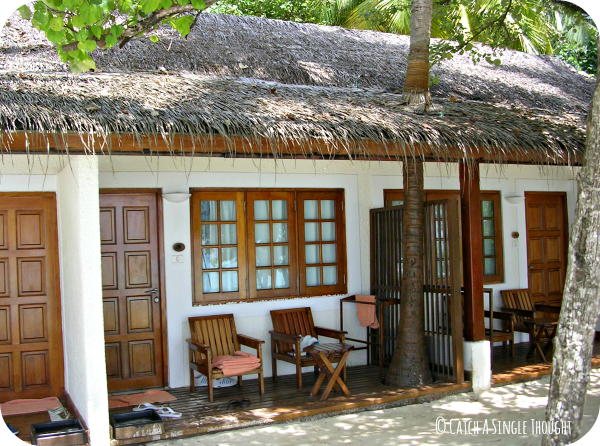 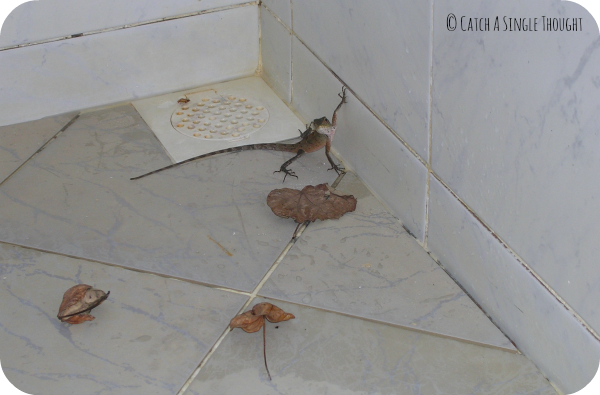 The beach huts were kept well clean, fresh bottled water was provided each day and we were regularly treated to a fancy towel arrangement by the member of staff who cleaned.  Perhaps one thing to note; the shower was completely open to the elements which took some getting used to.  You sort of felt ‘back to nature’ but it wasn’t great when little visitors would fall from the canopy overhead and you couldn’t persuade them to leave again!

Other than the fact that it was affordable, one of the other reasons we had chosen Maayafushi island was because it was one of the quieter islands on offer.  Some of the larger resorts have swimming pools, bustling bars and night life and plenty of on site activities to keep the whole family occupied.

Whilst there was some entertainment provided on the island, mostly you were free to just sit in the bar in the evening and enjoy a drink without being bombarded which we wanted from this holiday in particular.  We also made a number of friends and it was nice to sit around and chat. 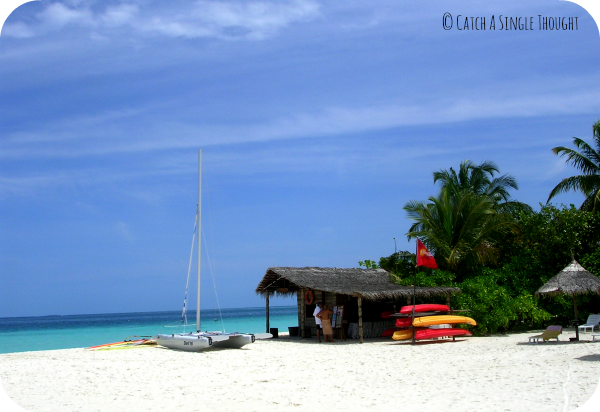 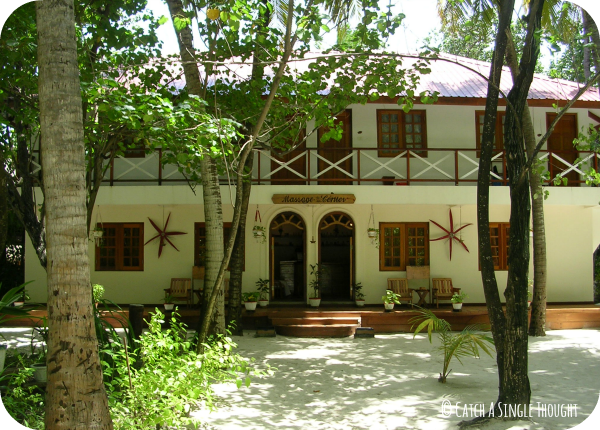 During the day there were activities you could take part in such as kayaking, snorkelling or visiting the spa.  I am not a massive fan of the sea, which seems weird when we had chosen to go to an island surrounded by the stuff, but I really enjoyed the kayaking as it gave me a chance to see the stunning coral which surrounded the island without having to actually get wet. 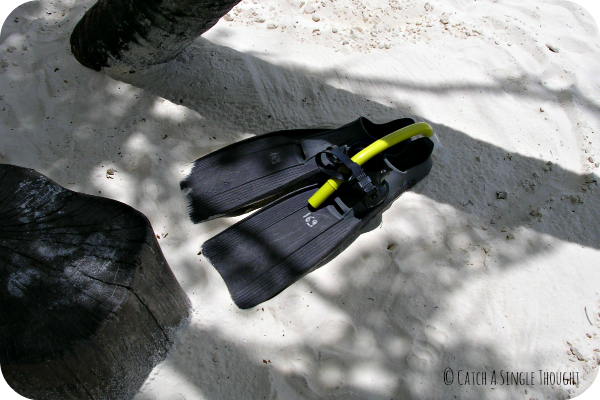 James hired snorkelling equipment for the two weeks we were there and spent almost every day out exploring the reef. 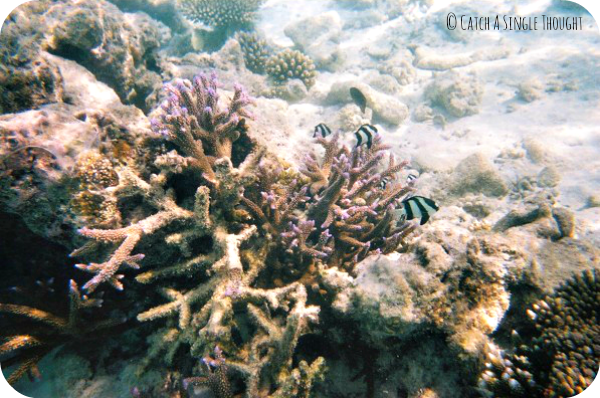 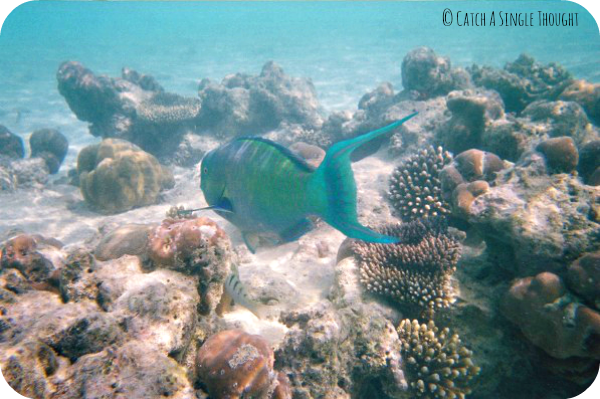 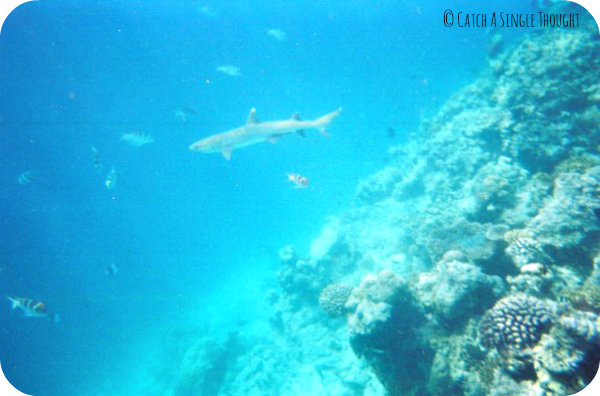 Yes, that is exactly what you think it is.  I was lucky enough to see two reef sharks playing and chasing each other right in the shallows as I was sunbathing, although I wasn’t quick enough to grab my camera and capture it unfortunately. 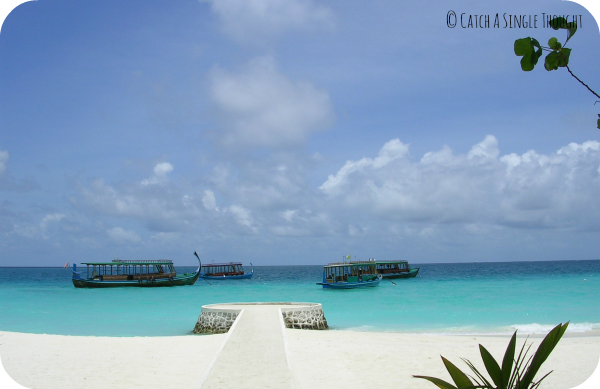 There were also plenty of excursions planned for those who wanted to go off the island; night fishing (and then eating what you had caught at dinner that evening!), visits to local fishing islands, catamaran sailing and so on.  These were never pushed onto you but simply made available at reception for those who were interested.

Food was a buffet style each evening and the restaurant was split into tables of four, meaning most parties were dining with another couple.  This was fine, and it was really nice to meet another couple and spend each evening catching up and chatting with them.  As the island was Italian owned, there was usually an Italian theme to the food (lots of pasta and tomato sauce going around) but there was also plenty of locally caught fish for those brave enough to try it as well. 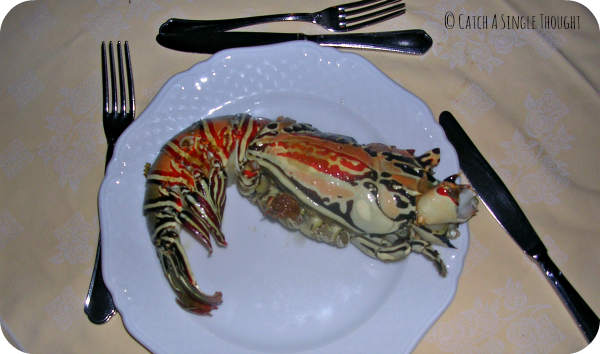 If you didn’t fancy eating in the restaurant you could arrange to have your dinner out on the jetty.  We opted for this as we thought it would be romantic.  It was actually quite terrifying. 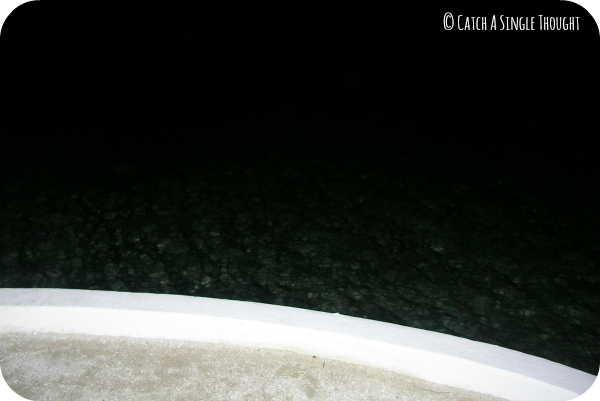 Utter darkness…aside from a couple of candles, you are surrounded by pitch black.  This light was made by the light of the camera to give you some idea.

The swishing sounds of the ocean were quite therapeutic, but not knowing when your waiter might be appearing or when something else might come and join you was a tad disconcerting to say the least! 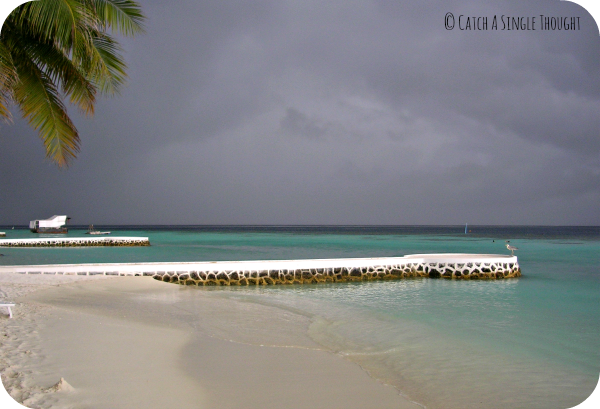 May to October is typically the rainy season in the Maldives, and although we did get days when the sun was shining beautifully, we also had to contend with a number of cloudy days and tropical storms as well which, although on occasion we did wonder whether we needed to leave our beach hut as we watched the waves being tossed closer and closer…were pretty incredible to see.  One thing we did quickly come to realise as well is that even on cloudy days you could catch the sun.  Something to be aware of if you are travelling out there.

As we had discovered on our first day, the weather can change in an instant as well so you never really knew what you would be getting. 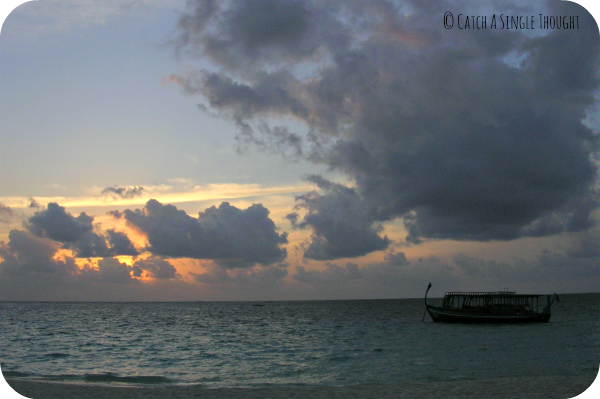 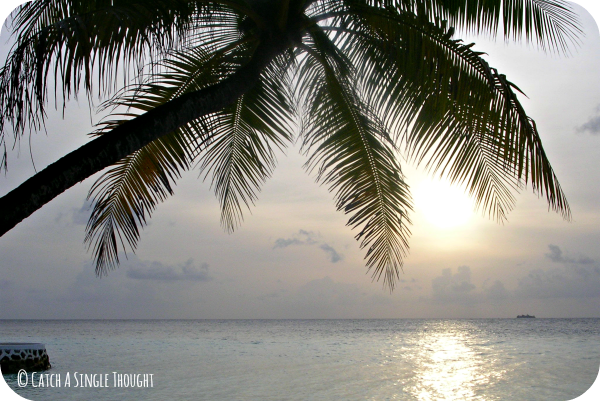 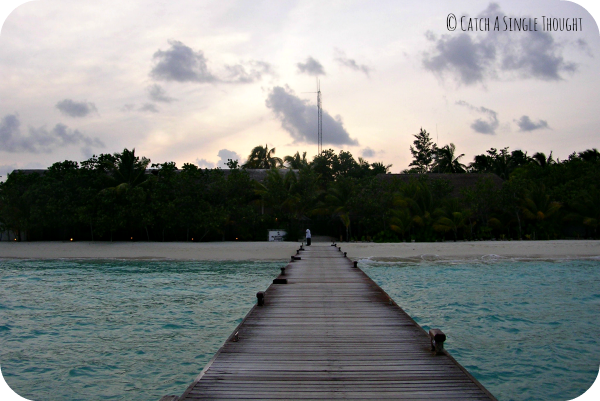 One thing we did do, which I would highly recommend is getting up to see the sunrise.  We had to set our alarms for about 5.30am but oh my goodness it was worth it.  There was literally nobody else about on the island, and the views…I don’t think the photos do it justice at all.  It was really quite magical. 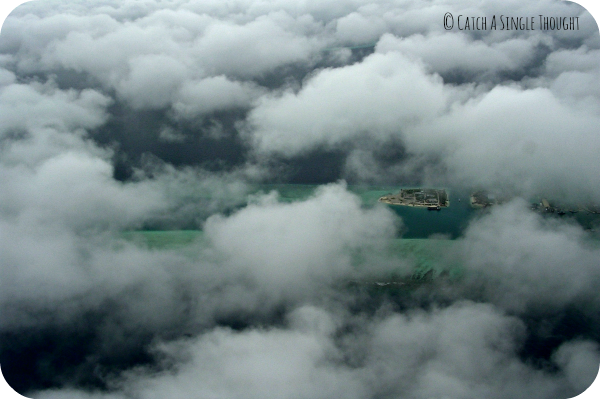 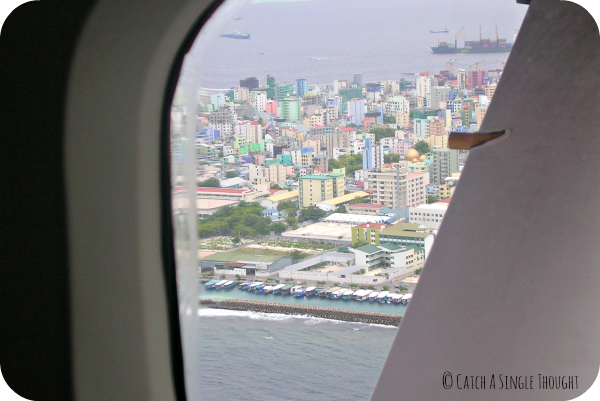 Then it was back onto our seaplane, and back to Male where we caught our plane home to Manchester.

Although we booked through Thomas Cook, I was unable to see the Maayafushi resort available although there are other islands.  You can book through some of the other major companies though, and see other packages for similar islands as well.

Despite the initial hitch when we arrived we had a wonderful and relaxing holiday which was just what we were after.  The Maldives are absolute paradise as you might imagine and if you are looking for a luxurious holiday then this should be a serious contender.  I know I would love to return one day.