Each year we try and factor in one visit to see Santa (sometimes it ends up being more than once which can be a little confusing for the kids!) so when our local Wyevale Garden Centre invited us to come along and try out their Breakfast with Santa we knew it was the ideal way to kick off our festive season.

We decided to tie it in with buying our real Christmas tree which we always like to do on the first Saturday in December so we chose the 6th to go along. 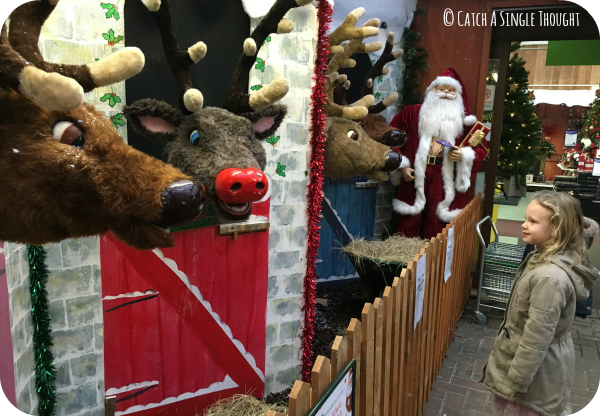 Although our local Wyevale Garden Centre didn’t have a Grotto, we certainly noticed that an effort had been made to dress up the restaurant area with festive decorations; there was a toy filled sleigh with a wonderful moving reindeer, a chair festooned with tinsel and sparkly bits where Santa eventually sat with the children and great thought had been put into the individual place settings as well.  I didn’t even think to check whether there would be a Grotto and I’ll admit to being a little disappointed on the day so this is definitely something I would check in future, and if you think it will be an important element then do make sure before booking. 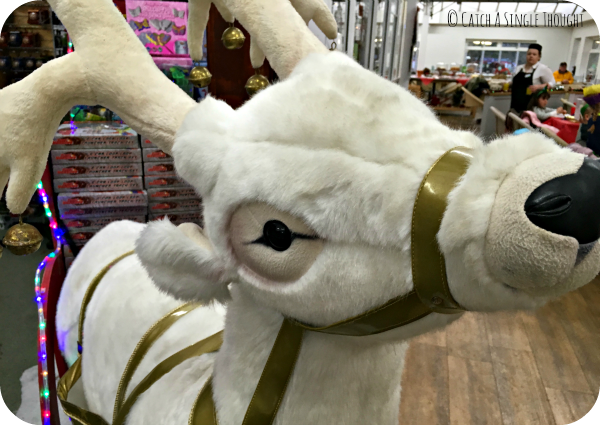 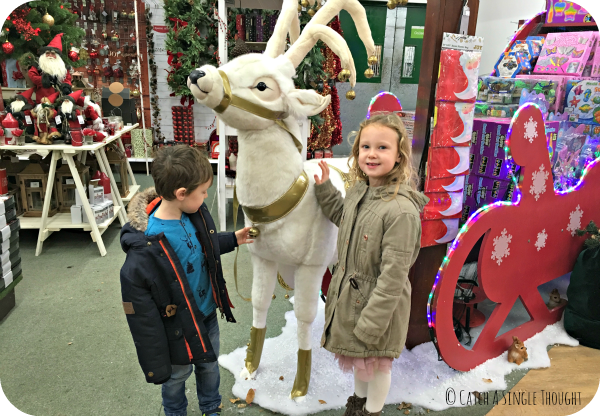 A section had been cordoned off for the guests who would be meeting Santa and I particularly liked that each table had a name card with the family name and the children’s names as well; no fighting over where to sit (from the parents!).  We just drifted in around 9.45am and found our seat.  Immediately an elf was over asking what we would like to drink, whether we were ready for our breakfast and encouraging Meg and Eli to get stuck in with their little activity sheet. 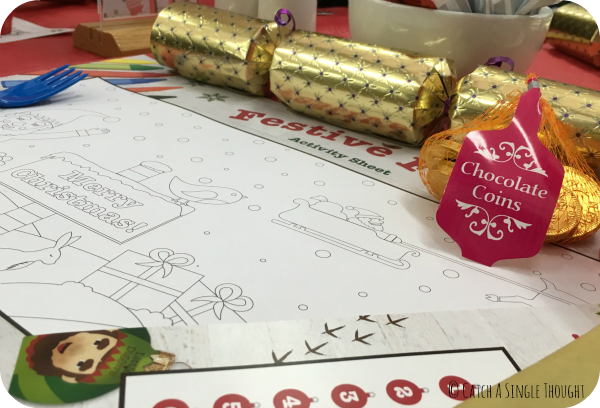 There was also a small soft play area just off from where we were sitting which had been closed to the public but was open for the Santa guests; ideal for Eli who was bouncing with excitement and couldn’t contain himself.  He was never going to sit and wait for his breakfast to arrive as he kept looking for Santa at every opportunity so it was nice for him to go and play and burn off some of that excess energy. 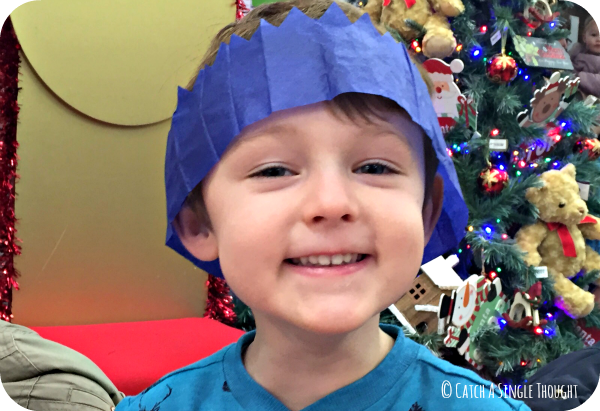 We were given breakfast before we met Santa; for children that was a mini cooked breakfast and adults could choose between a full cooked breakfast or a lighter option of pastries.  We ordered these in advance when we were booking our time slot for the event.  The food was well cooked and there was a lot of it which James commented on a number of times.

After everyone had eaten their breakfast, the elf returned and asked all the children to shout as loudly as they could for Santa.  Surprisingly it took them a while to warm up to this but once they were really going for it, Santa appeared. 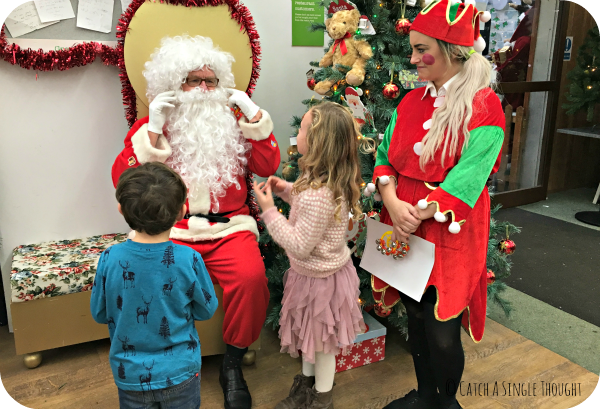 Each table was invited up individually to come and sit with Santa and meet him which I thought was lovely.  He spent a lot of time talking to the children and was very engaging.  I think you can tell by the look on Eli’s face what he thought about the experience. 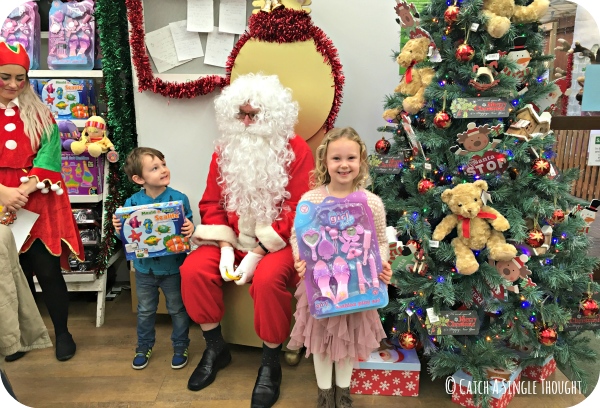 After they’d spent some time talking to Santa they were asked to choose a gift.  Although one part of me was a little sad that the gifts weren’t wrapped another was pleased that we could see what the children were getting and that there was a range of items to choose from.  Neither of the kids ended up with the items they are actually holding in the photo as they both changed their minds after seeing what the other kids chose but the staff were very accommodating about this! 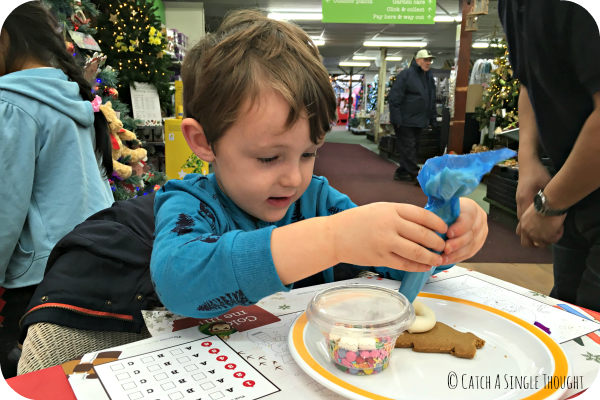 After speaking to Santa, some cookies were brought out for the children to decorate.  Again this was a lovely touch and it kept Meg and Eli occupied whilst Santa finished with the other tables.  I liked that he then didn’t disappear away but wandered amongst the children chatting to them and the parents.  He was a very good Santa! 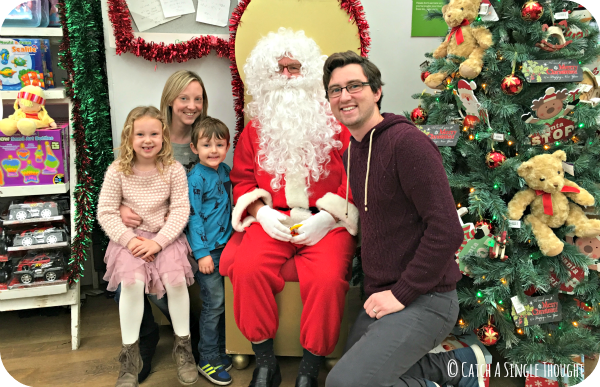 The whole event probably lasted just under an hour and a half and both Meg and Eli thoroughly enjoyed themselves.  It wasn’t too long that the children lost interest or too short that you didn’t feel like you were getting your money’s worth.  I also appreciate that it most likely depends on the Santa you get on the day and your particular garden centre but we thought it was a lovely way to kick off this festive period.

As well as running Breakfast with Santa events, Wyevale are also holding Tea with Santa too so it’s well worth checking what is happening at your local centre.  We wouldn’t hesitate to recommend the event to friends and family.

We were provided with complimentary tickets to attend this event.  All thoughts and opinions are our own.