A Weekend Break in Oslo, Norway {Part One}

I sat down to write this post so many times before Christmas and then just thought, how can I possibly condense into a few blog posts the experience that was our time in Oslo, Norway? 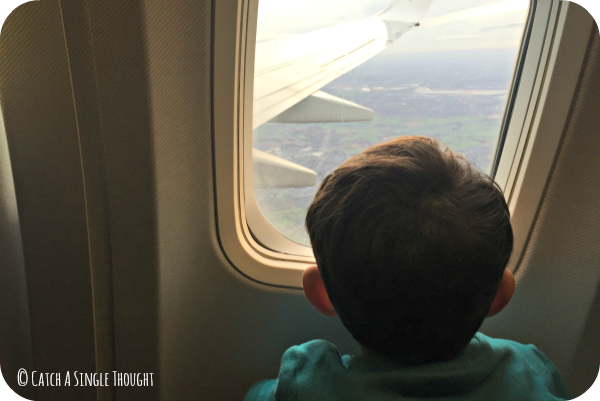 There were so many firsts for us: the first time Eli went on a plane, the first time the kids went ice-skating, our first time in Norway, our first overseas city break as a family…and much more besides.  I took over 1,000 photos and I really just want to share all of them with you!

Of course that just isn’t possible but it does mean these posts will be a little photo-heavy.  I hope it is worth it for anyone thinking of visiting the city themselves. 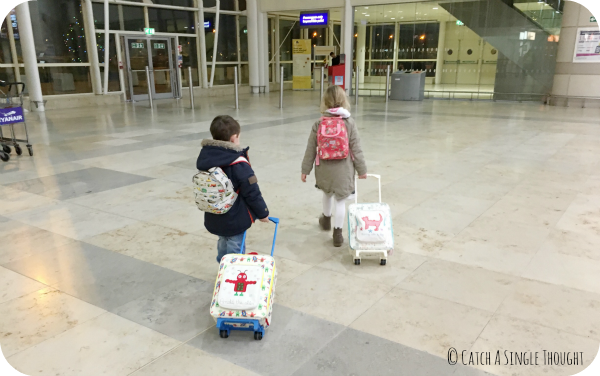 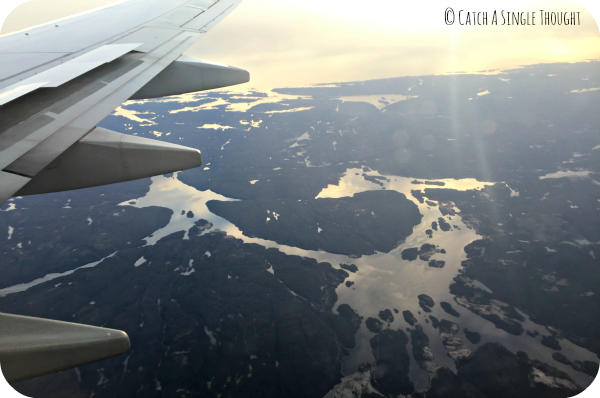 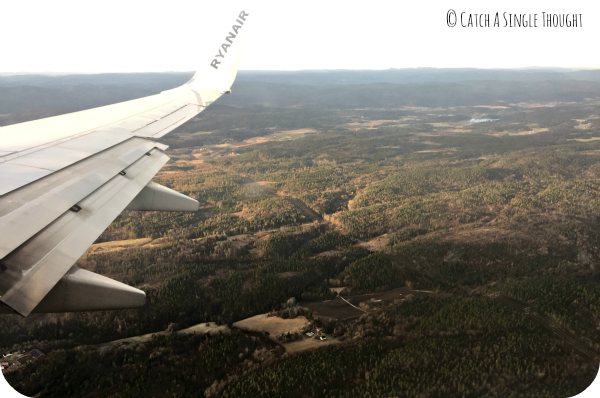 I have to start by saying how impressed I was with both Meg and Eli on the flight out to Oslo.  We had tried to take advantage of cheap flights with Ryanair and so our journey was a bit higgeldy-piggeldy with a very early start on Friday morning to get us to Liverpool airport on time.  Once we had landed after the 2 hour flight, we had another hour and a half to spend on a train into the city but they both coped amazingly and took it all in their stride which I think both myself and James were quite impressed with. 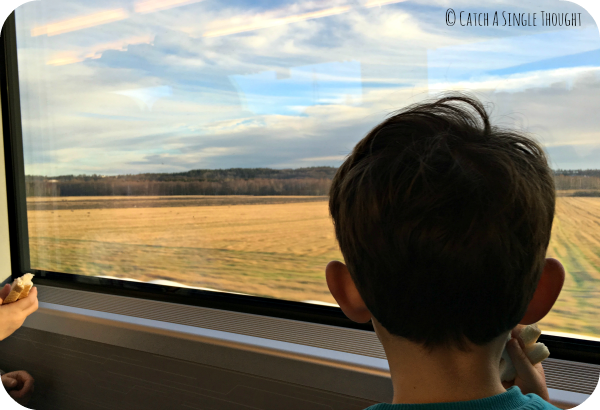 We booked the train ahead of time and it was very easy to pick up the tickets at the airport, find where to catch the free shuttle bus to the train station and then board the train.  In fact, both ways (we landed and departed from different airports) it was the same. 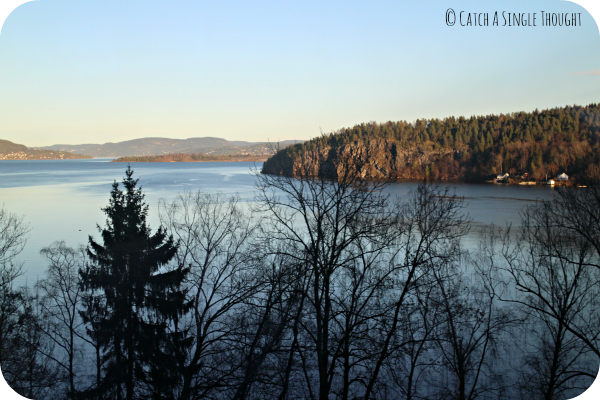 The train journey was brilliant and offered a great way for us to see some of the country, if it was a little blurry at points! 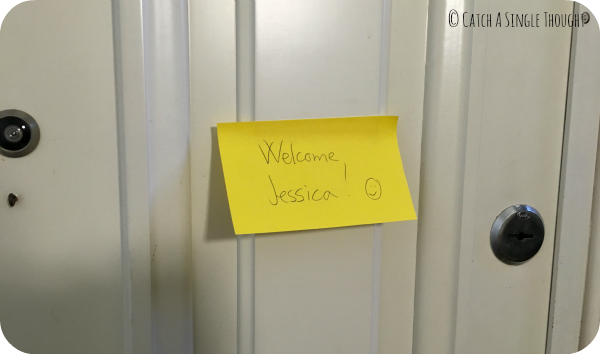 We had booked accommodation through AirBnB (after our very positive experience in London) and although it felt a bit more ‘heart in mouth’ booking somewhere abroad, it all went very smoothly.  We caught a taxi from Oslo Central Station (Oslo Sentralstasjon) to the apartment as we weren’t exactly sure where we were headed.  It turned out in the end that we were less than 5 minutes walk from a metro station which took you right into the heart of the city in a matter of minutes but we didn’t know that at the time! 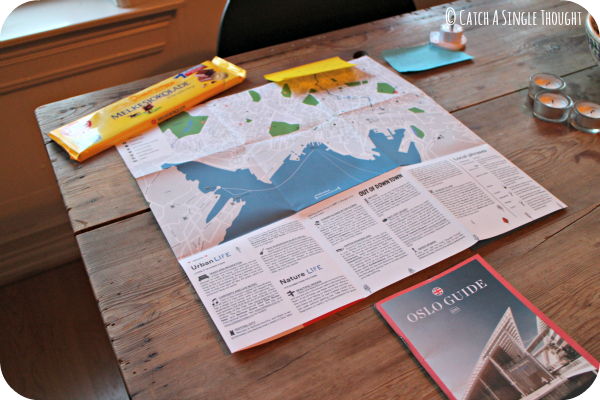 On entering the apartment we discovered that our host had left our a map with some notes on great places to visit as well as a little treat which was lovely after such an early start.  She had also left directions to the nearest supermarket so we headed out to buy some supplies, stopping off at a playground we passed on the way. 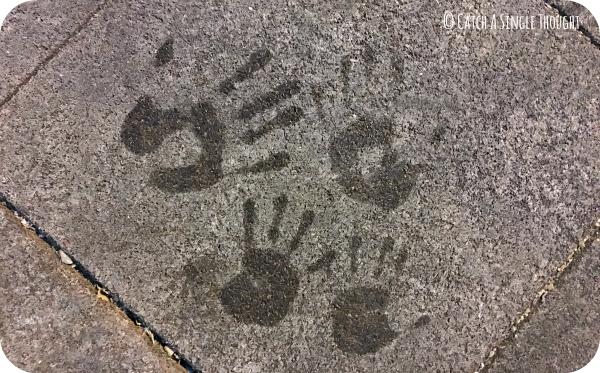 Things we discovered on our first day: it gets dark very quickly and it gets cold very quickly.  This photo was taken about half an hour after we left; when it was bright light and quite mild compared to the kind of weather we had been expecting!

Saturday was our major day in Oslo and we planned to cram in as much as was feasibly possible.  We had spent a lot of time researching beforehand and speaking with a representative from the Oslo Tourist Board who was extremely helpful in recommending things for us to do so we had a rough plan to stick to. 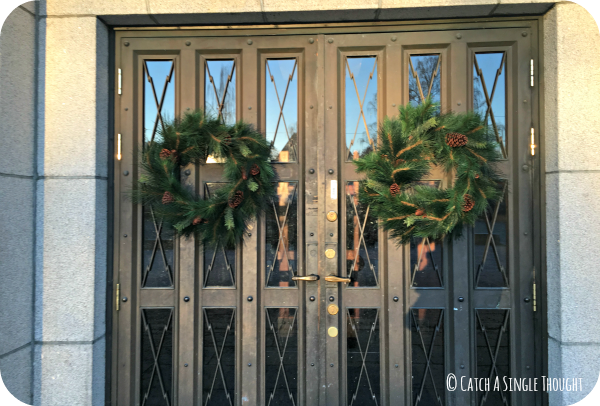 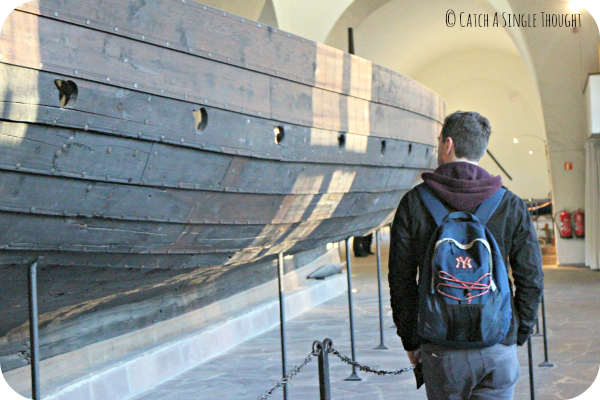 First up was the Viking Ship Museum.  This was partly for James who has a huge interest in this period in time and partly for the kids as well.  It wasn’t as big as we were expecting and although the entrance ticket also got you access to another museum in the centre of Oslo, we were a little disappointed.  Although it was fascinating to see the original long ships up close there’s no more than an hour’s worth of exploring to do here. 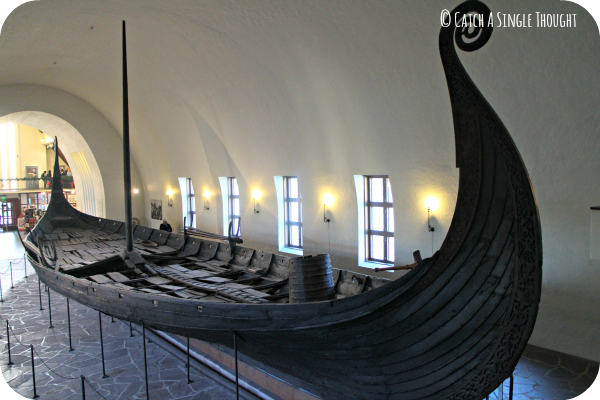 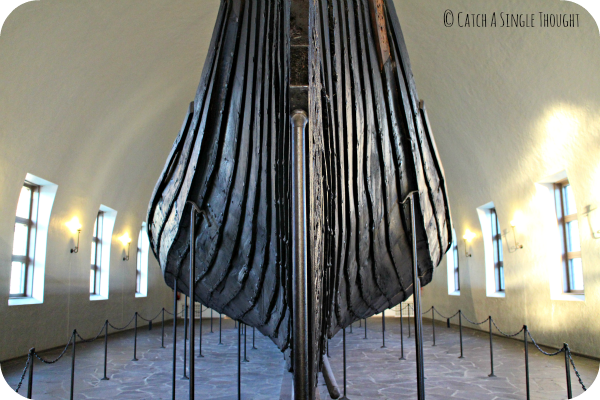 The Viking Ship Museum is located on Bygdøy, a peninsula on the western side of the city which is home to five major museums.  The one great thing we noticed about Oslo was that the public transport system is very easy to use, especially if you buy an all day travel pass and we just hopped onto the metro and made our way there without any difficulty at all. 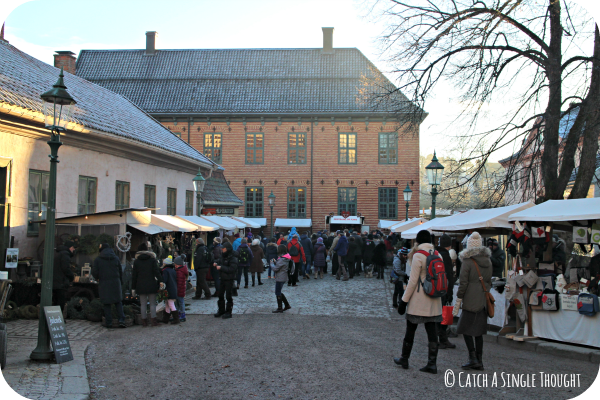 Not spending more than an hour in the Viking Ship Museum turned out to be fine for us as we I was keen to head to the nearby Folk Museum (Norsk Folkemuseum) which also happened to be the location of Oslo’s biggest Christmas market.  What better way to enjoy the festive season in a Nordic country than by wandering around a Christmas market? 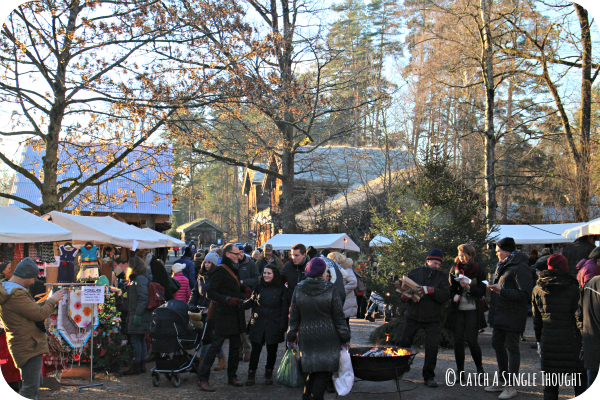 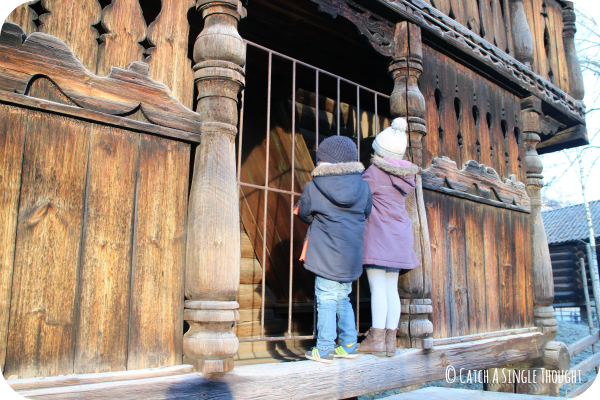 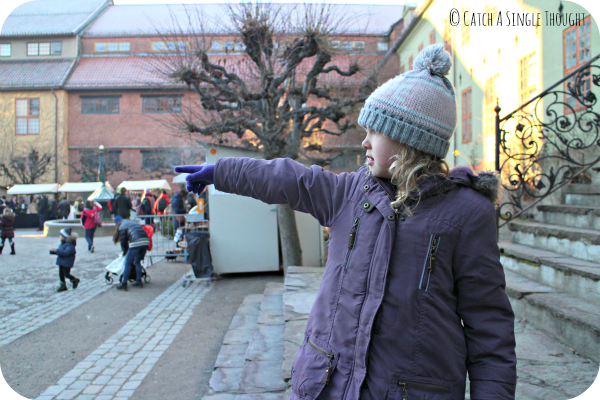 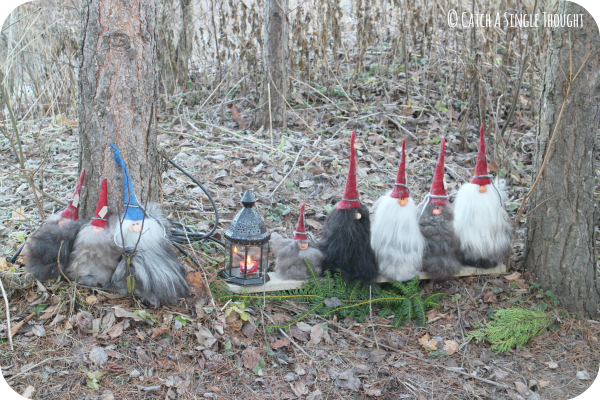 From stalls selling homemade items to pancakes and kakao (hot chocolate) plus the actual museum itself which is the largest open air museum in the world there was lots to see.  The entrance price was about £20 for the four of us plus additional costs inside but it was a very enjoyable way to spend the morning; even if it was far colder than any of us had anticipated! 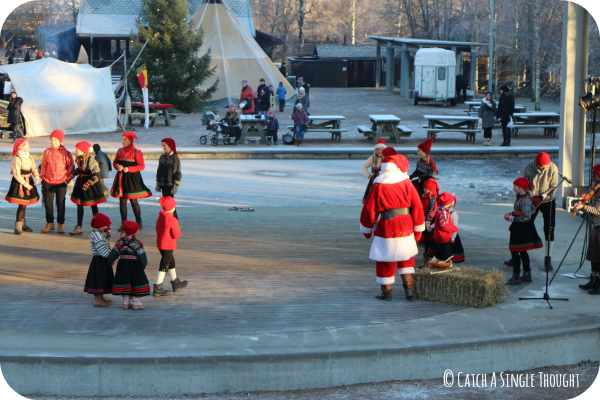 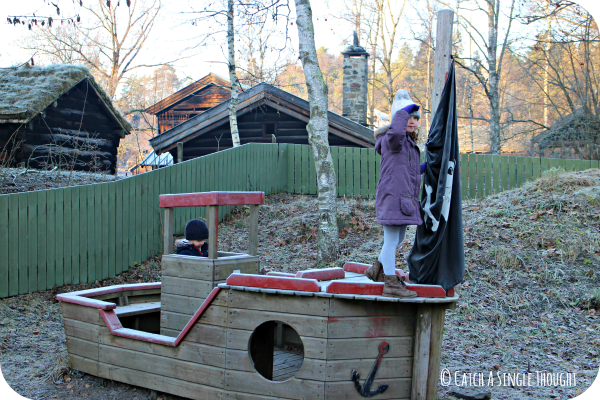 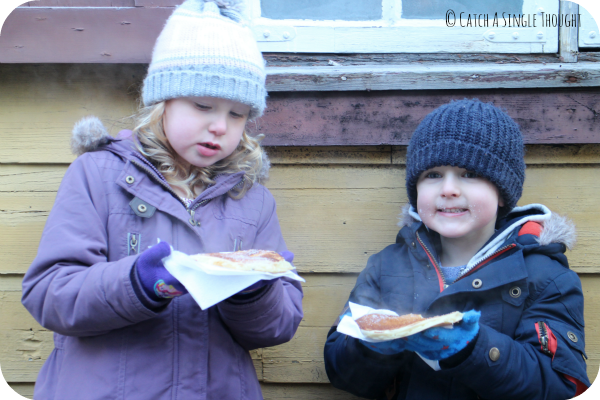 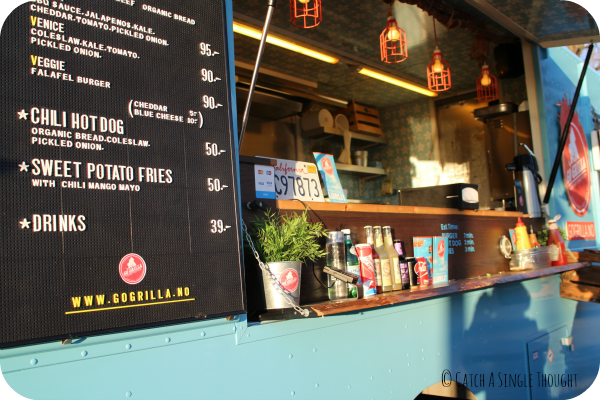 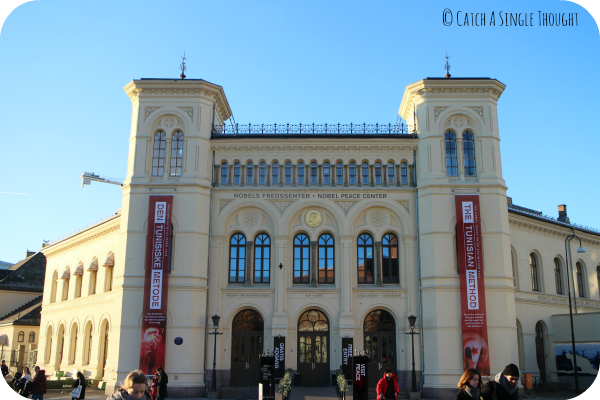 After we had exhausted the delights of the Folk Museum we were ready for something to eat so we headed back towards the centre of the city, getting off a few stops down the road at Brynjulf Bulls plass. This put us within walking distance of the Nobel Peace Prize Museum, Aker Brygge and the Nationaltheatret district. Desperate for some lunch we decided to try one of the food vans which were dotted about whilst admiring the view over the water. 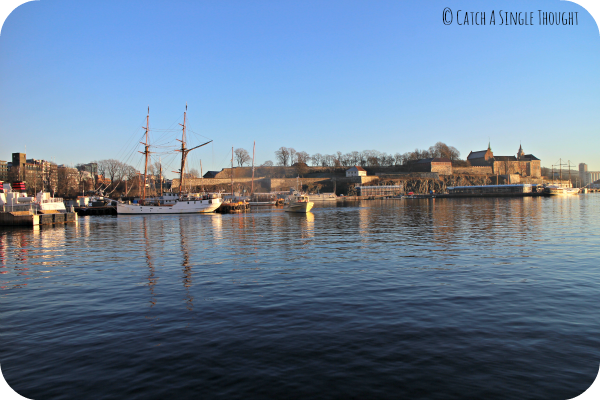 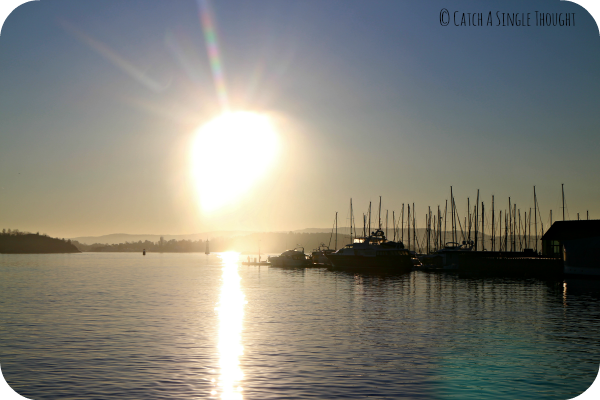 I have to admit that this was one of my favourite points of the day; the sun was sitting quite low in the sky and just hit the water and the boats in the dock just perfectly. There was a playground right next to the port and we just stood and admired the view whilst Meg and Eli played. Perfect.

And a great place to end Part One of our trip to Oslo…you can read Part Two here.