A Visit to The Vigeland Sculpture Park, Oslo 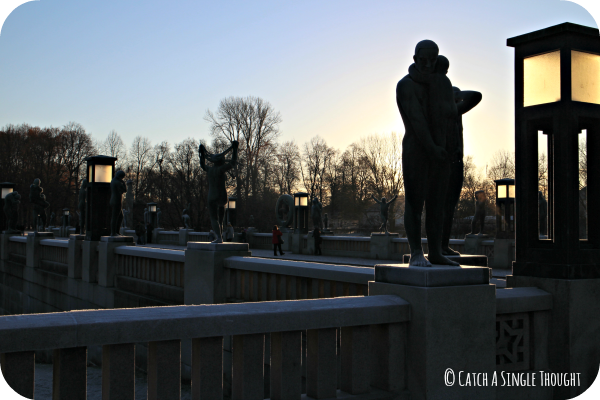 The Vigeland Park in Oslo is the world’s largest sculpture park created by one single artist and is a very popular tourist attraction in the city.  The park itself is actually called Frogner Park with Vigeland being the name of the installations within the park but as everywhere we looked there were references to ‘Vigeland Park’ that’s what we are sticking with for the purpose of this post! 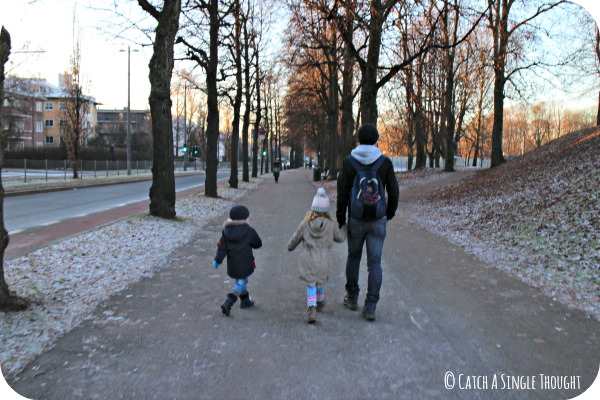 The park is in the Kirkeveien area of the city and is very easy to get to, although I think we made it harder than we needed to!  We caught the train from Jernbanetorget (right next to Oslo Central Station) to Majorstuen and then had a 15 minute walk from the station to the park.  Had we known there was a tram stop right outside the park we would definitely have used that instead and we did to head back into the centre of Oslo. 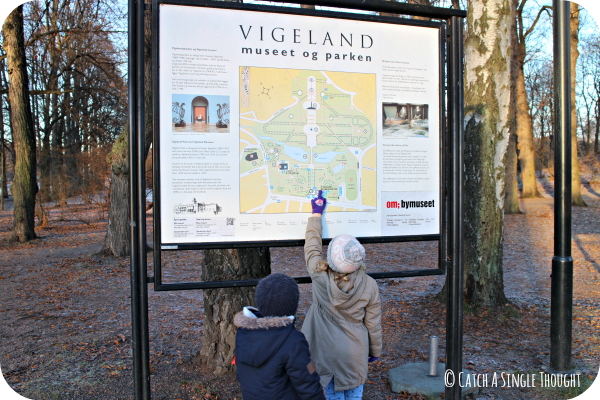 Vigeland Park is free to enter and contains around 200 sculptures cast from bronze, granite and iron by the sculptor Gustav Vigeland.  It is just over 110 acres in size and is split predominantly into 5 areas; there is the Main Gate, the Bridge, the Fountain, the Monolith Plateau and the Wheel of Life.  These refer to the main areas of the park which contain sculptures created by Gustav Vigeland.

We headed to the park first thing after our visit to Oslo Opera House and it was already pretty busy on arrival, even despite the freezing temperatures.  I can see that on a warmer day, or perhaps if we’d gone later in the day, it would have been much busier. 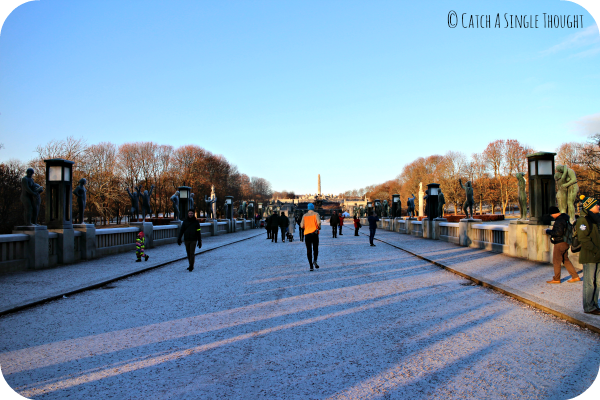 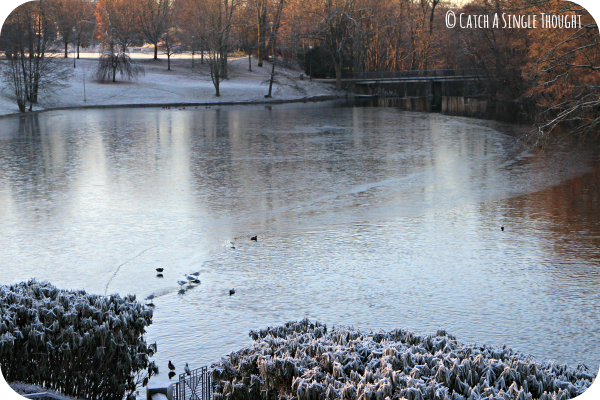 We came through the main gate and were greeted by a huge Christmas tree decorated with fairy lights; to our left was the playground and to the right was the Vigeland cafe which we made a note of!  We headed first to the Bridge which contains a long stretch of rather interesting sculptures. 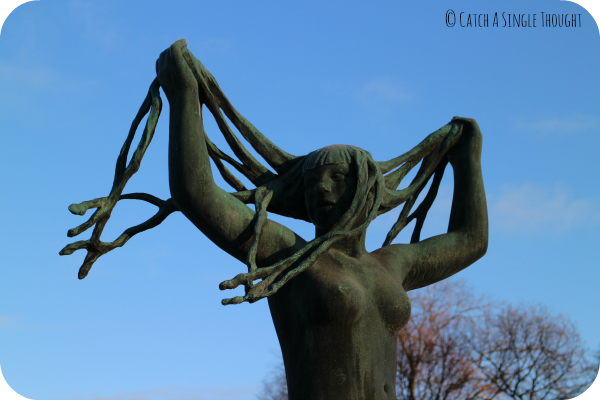 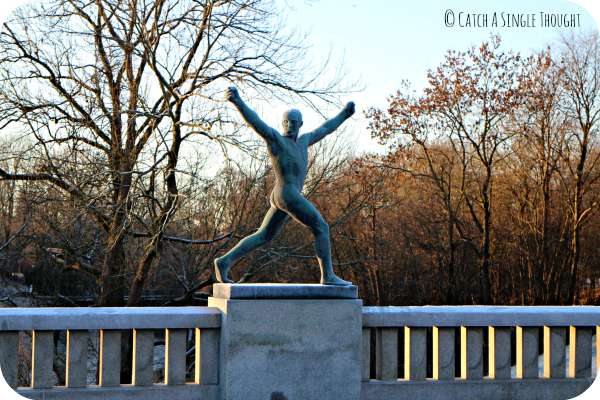 Cue lots of questions from Meg and Eli about why none of them were wearing clothes.  Some thoughtful person had also gone along and placed handprints in the frost on the sculptures as well which raised a lot of wry smiles and sniggers from the other tourists visiting. 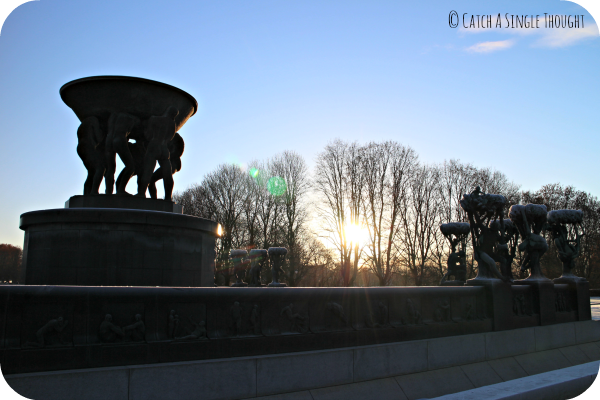 We kept going in a straight line and came to the Fountain which was probably my favourite installation of them all.  We must have timed our visit right as the way the light was coming through the trees and hitting the fountain made it seem quite magical, especially as everything was laced with a layer of frost. 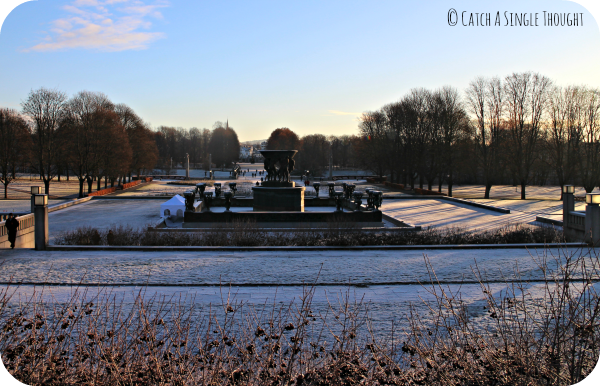 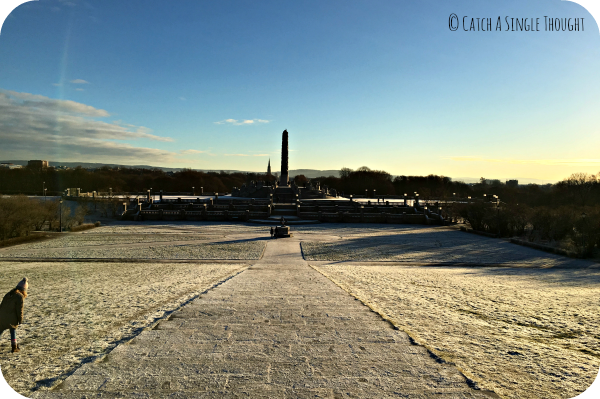 The Monolith Plateau was next and then finally the Wheel of Life.  It took us about half an hour to walk from one end of the park to the other although we weren’t timing ourselves, or rushing particularly.  It was much quieter at the Wheel of Life and we only really spotted a very dog-walkers and runners.

Between the Monolith Plateau and the Bridge, there are paths which veer off into the parkland but we were all pretty cold by this point and Eli had spotted the playground so he was very keen to try that out. 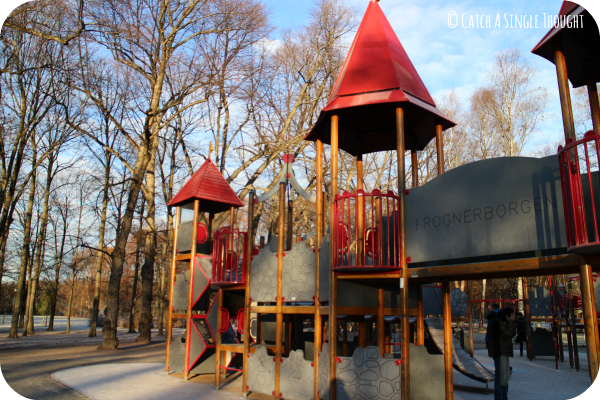 The playground was great, if a little treacherous.  We saw a number of children slip and tumble whilst climbing the ladders or the walls…one of the hazards of heading out in winter I guess!  Perhaps unsurprisingly we didn’t last too long at the playground either before we all started looking longingly at the cafe and dreaming of hot chocolate… 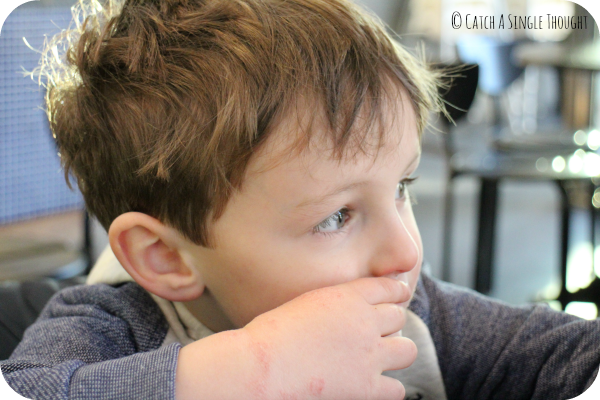 I think Vigeland Park was a lovely way to spend the morning; I can imagine that if the weather had been more pleasant we would have made more of a day out it, perhaps packing up a picnic to take along.  I’d definitely love to return and see it in the warmer months when the park isn’t so bare and frosty although that did lend it’s own type of beauty to the visit as well.

I understand there is also a museum which is situated in the park and costs about £5 for adult entry and £2.50 for children aged over 7 (60 NOK and 30 NOK); it showcases the early work of Gustav Vigeland and is actually located in his former studio and home.  The building which houses the museum is itself said to be one of the best examples of neo-classical architecture in Norway although we didn’t manage to get around to visiting it.