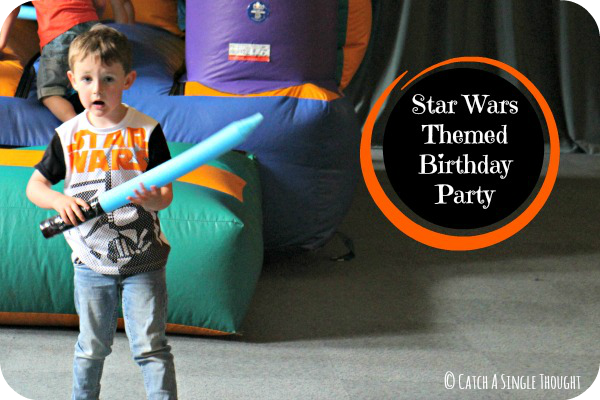 Star Wars is very much flavour of the year since the release of the new movie last December so it was no surprise to us that Eli desperately wanted a Star Wars themed party this year.  Unlike Meg, he’s a bit less specific about who he plays with and so we were faced with the prospect of throwing a ‘whole-class’ party on a budget.

We do love a good challenge and this was no different.  The homemade decoration was our friend for this particular endeavour and I like to think that we did a pretty good job.  Except perhaps when it came to our Death Star pinata but you can’t have it all!

Unfortunately, I realised that although I filmed large parts of the day I didn’t take pictures of everything so for a more rounded view you might want to skip to the end and look at the video instead. 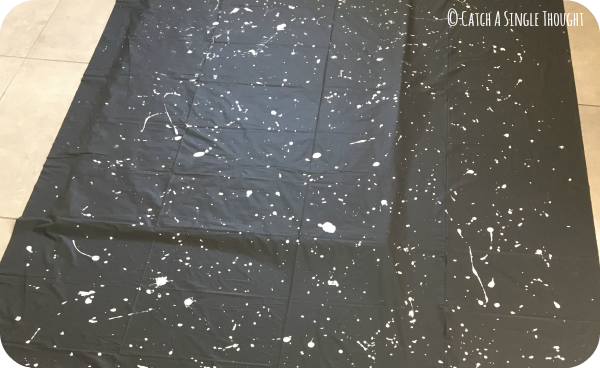 The first place we wanted to start was having a good treats table.  This worked really well at Meg’s gold and pink Ballet Party last year and as we were using the same venue we knew what we had to work with.  I purchased some cheap black tablecloths and spent one afternoon flicking white paint at them to create ‘stars’…it didn’t take long for the paint to dry apart from in a few spots but it’s worth making sure you have somewhere to lay out the tablecloths so the paint splatters don’t get smudged.

I also liked the idea of having something hanging down above the table and in front of the starry tablecloth.  Did you know that buying silver paper lanterns is actually pretty expensive?  I don’t know what makes them so different from every other colour but there you go.  So, some cheap paper lanterns from a shop in the town centre and a can of silver spray paint and we had our very own space lanterns. 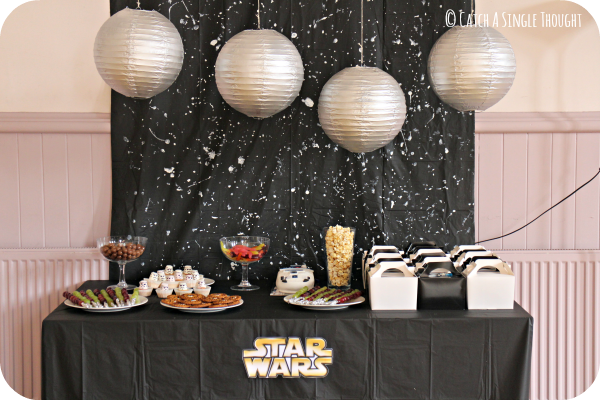 Now we had to sort out the treats.  I tried to fit as many as possible to the ‘theme’ but we forgot to print out the little cards I had designed which was quite frustrating!  You’ll have to take my word for it that the treats were all aptly named. 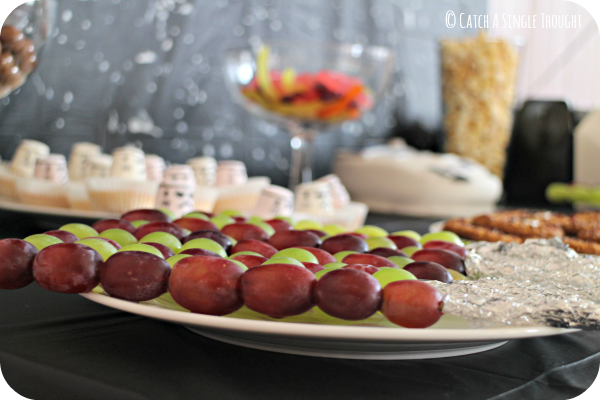 ^^ Lightsabers made from green and purple grapes.  We used wooden skewers and secured the ends (or handles) with tin foil. 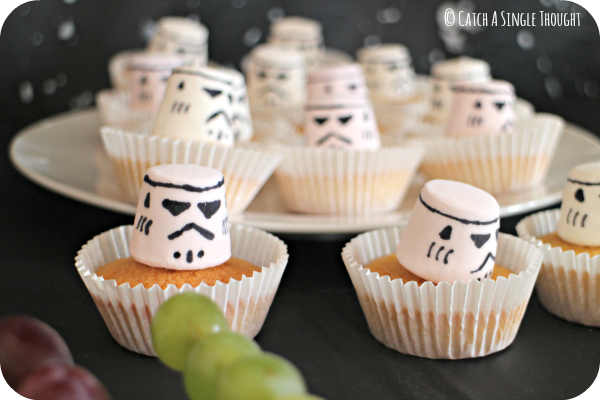 ^^ Stormtrooper cakes.  These were just fairy cakes with a marshmallow stuck on the top.  I used edible ink and secured them with a cocktail stick.  I think these should perhaps have come with a warning although of all the under 5’s who were there it was only my Dad who managed to bite straight into one and hurt himself! 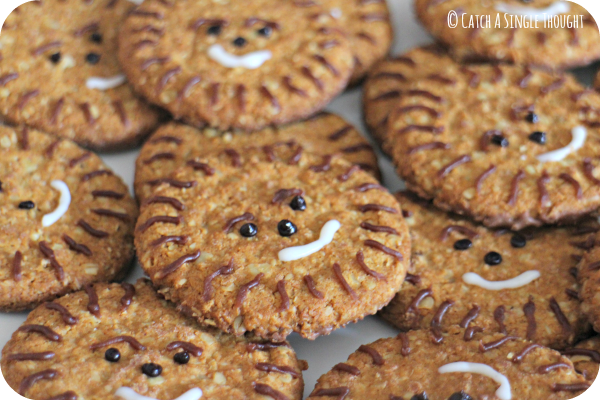 ^^ Wookie Cookies.  These were just chocolate biscuits with some edible icing.  Time consuming but effective.  I think these were my favourites of all the treats we made.

We also had Jabba’s Grubs, Padawan Popcorn and Thermal Detonators but I didn’t manage to take individual photos of those. 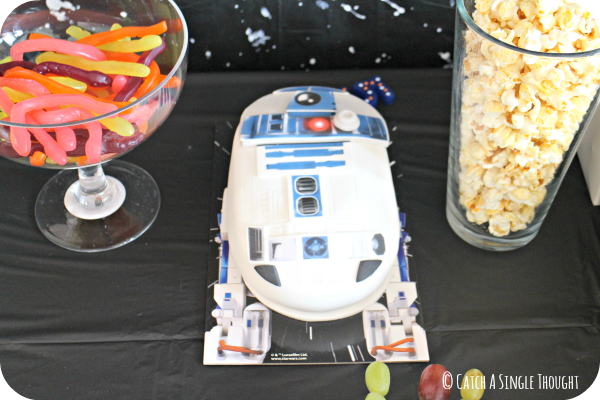 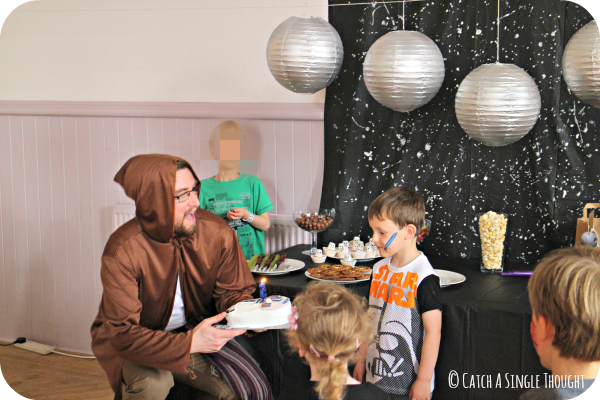 I cheated a little with the birthday cake.  Knowing that with so much else going on I didn’t have the capacity to stress over creating the perfect R2D2 cake we opted to purchase one to go on the treat table and then James made a chocolate sponge cake which we put into the party bags.  I think I’ve landed on the perfect formula here; you get a nicely decorated cake for your display and ‘happy birthday-ing’ but you get to send the kids home with something delicious and homemade. 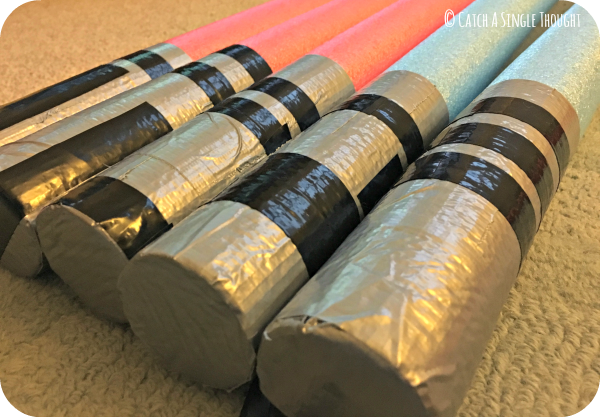 I’m not a big fan of sending children home with party bags full of tat so again, we went for something simple and homemade.  Pool woggles (or noodles) purchased from our local pound store, cut in half and wrapped with insulation tape for the handle equals foam lightsabers which are pretty much indestructible and perfectly painless.  These were the favourite item by far and if you can imagine 20 very excitable little people thwacking each other with lightsabers and bouncing on a bouncy castle then you have pretty much summed up the party!  We had red or blue for the good side or the dark side.  Obviously. 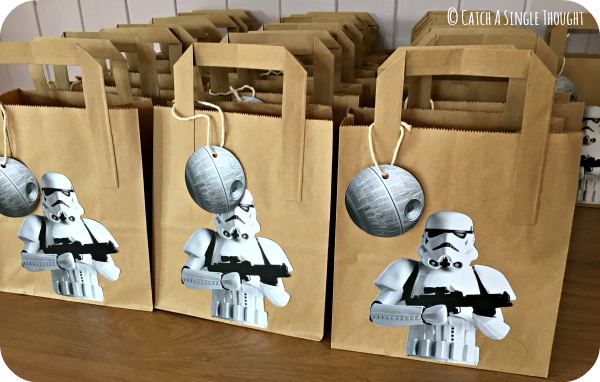 We also decorated some brown lunch bags with stormtroopers and Death Star tags into which we put a bottle of bubbles and a slice of cake.  These along with the foam lightsabers were the party favours and I think it was more than enough. 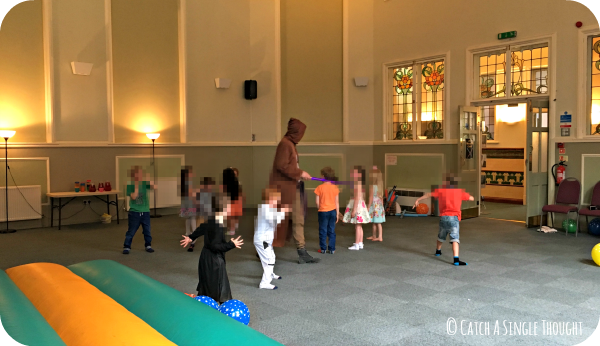 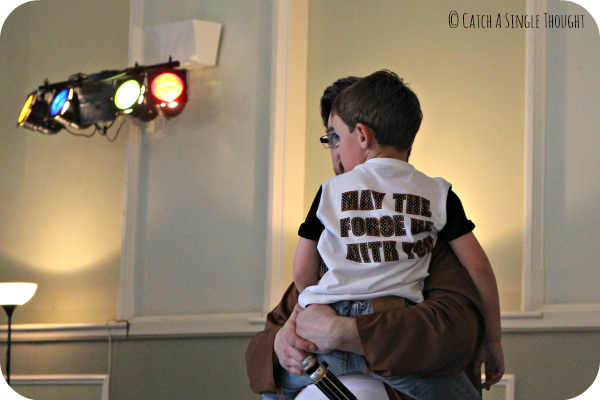 James really stepped up to the mark on the day of the party and wearing a Jedi cloak we had borrowed from a friend he led the children through some all important Jedi training.  I personally thought he was a little terrifying at times (musical statues became ‘using the force to disappear’ and he was stalking around the room trying to spot any movers) but so many of the parents praised his efforts and asked whether we hired him out for other parties so I guess it went down well!

For the food, again we went with a similar theme to Meg’s party last year.  I bought black and white food boxes and pre-filled these with crisps, a yoghurt, fruit and a drink and then we made up some sandwiches which were handed out once the children were sat down.  So much simpler than worrying about cooking hot food. 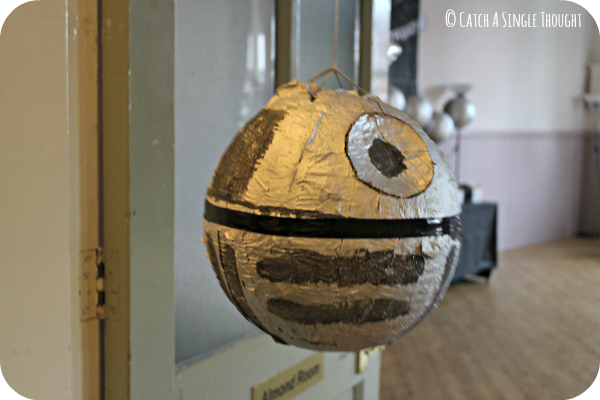 Finally there was the Death Star pinata.  I will admit that I was a little disappointed by how this turned out.  I was actually debating not sharing the photos on here as it really wasn’t at all what I had hoped.  We decided to make our own as we have used store bought one in the past and they take an absolute age to break through.  I figured a few layers of papier mache would be much easier for the kids to destroy.  To get the more rounded shape of the Death Star I used a beach ball rather than a balloon but I found it really tricky to get a smooth finish which I think became more evident as it hardened. 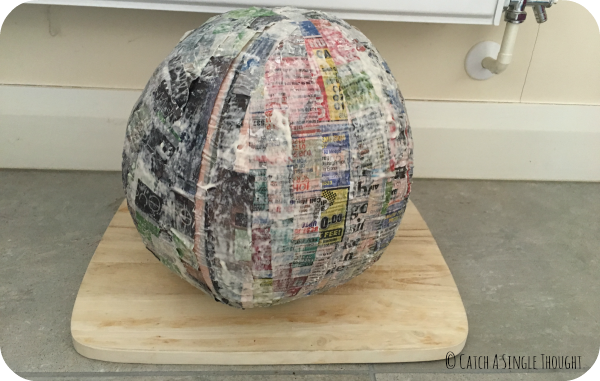 I hoped that the silver spray paint would cover the worst and it didn’t look too bad, until we tried to paint on some details to make it more Death Star-esque.  The lumpy surface made it almost impossible to draw a decent line or colour in any parts and the whole thing just ended up a little bit disastrous.  The only positive was that Eli immediately recognised it for what it was; which was a blessing!

And, as we predicted it only took two or three swings before the whole thing came tumbling down.  I think next time I’ll do a few more layers to make sure all the children at least get a shot at it. 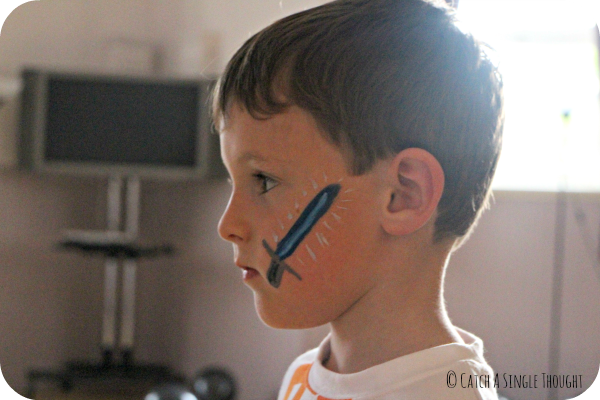 The party lasted just over 2 and a half hours and I think that was plenty of time to do all the games we planned (not many), let the kids wear themselves out on the bouncy castle (which they did) and have some food.  And I think that Eli had a good time, although in his typical 5 year old way he’s already onto what he’d like to do next year…