Love Your Loo! ǀ The #3PPromise with United Utilities 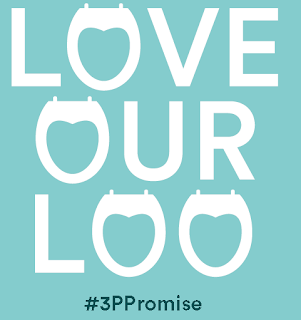 I don’t think I am off the mark when I say that the majority of parents love wet wipes.  We made use of them when Meg and Eli were small, but even now they are older we always carry a pack around with us and use them for a multitude of things; for wiping sticky faces and fingers, for removing biro off painted walls, for a quick clear up if we haven’t time to do a proper clean…and the list just goes on and on.

Of course one thing which we all know is that you should never flush a baby wipe down the toilet but instead should dispose of it in the bin, right?!  Actually, wrong!  I was recently contacted about sharing with you all a new study which was carried out by water company, United Utilities.  This report suggests that out of 1,000 people surveyed around a quarter admitted they flushed their baby wipes down the toilet!

It’s incredible to think of this happening, not just because we use so many wipes (around 1,500-2,500 baby wipes per child from the day they are born until they are 3) but because of the potential risk to the environment and our home sewer systems as well.  Baby wipes, even those which claim to be flushable, don’t break down in the same way that toilet tissue does and as such they can snag on pipe joints causing blockages.

United Utilities have included a heap more research, such as the fact that they tackle around 25,000 blockages each year, adding up to around £10 million and that doesn’t include the cost to homeowners.  Having to call a plumber out isn’t cheap, and if you add into that the additional cost of clearing any blockage which might have been caused…well, you quickly get the idea.

The impact on our environment is also pretty significant; according to a report by the Marine Conservation Society, there has been a 50% increase in the number of baby wipes washing up onto our beaches over the last year.  As a coastal-dwelling family this is something that we can personally attest to; we see all kinds of rubbish washed up and wipes are certainly included in that.

And this could all be avoided by simple throwing baby wipes straight into the bin rather than flushing them down the toilet…it’s a straightforward switch; from toilet to trash.  United Utilities have created a ‘Think Before You Flush’ campaign or the #3PPromise for short which offers much more information on this particular problem.  You can also find a handy downloadable parenting pack which contains activities, posters and details of a little competition to win some Boots vouchers as well.

This is certainly not the most glamorous of posts to write but actually, it’s pretty important and well worth sharing with others!

But just to lighten the mood…here are some of the things which parents told United Utilities their children liked to flush down the toilet!  Can any of you identify?!

All The Fun of the Beach...