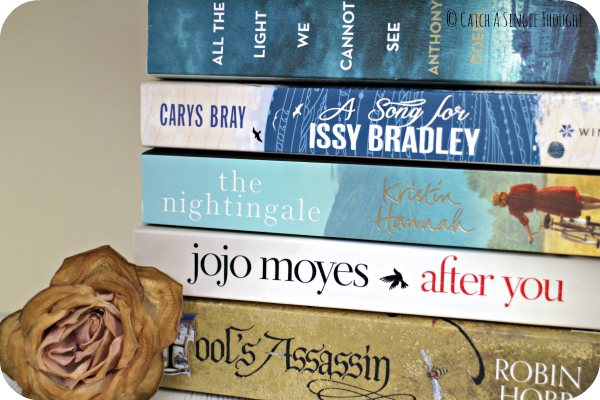 I realise this post should probably have been done at the exact midpoint of the year but I’ve had so much going on over the last few weeks that I’ve actually only just recently come to appreciate that we are halfway through 2016.  I mean seriously…when did that happen?!

I’m not sure whether it’s the influence of Booktube or just getting my reading mojo back but I have been flying through books since January.  Usually I set myself a reading challenge of 50 books and I’ve actually yet to meet that target.  Given that I’ve read 37 books already this year, I’m feeling pretty proud of myself!

So, onto my favourite books of the year, so far.

Fools Assassin by Robin Hobb
Fitz has been living a quiet life as Tom Badgerlock on a country estate with his wife Molly.  But one night a messenger arrives seeking an urgent meeting with Tom.  Before he can get to speak with the messenger they disappear, leaving nothing but a trail of blood.  Tom is thrown back into his old life as Fitz and must face up to his past.

I am a huge Robin Hobb fan and I was delighted when I saw that she was writing another book venturing back into the world of Fitz and the Fool.  Her previous trilogies featuring these characters are some of my all time favourite reads and this was everything I had imagined it would be.

A Song for Issy Bradley by Carys Bray
The Bradley family are a normal family living in Liverpool, until one day a terrible tragedy strikes and they lose a child.  The Bradley’s are also Mormons and this book follows how each remaining member of the family deals with Issy’s death, how they cling to their faith or push it away, how they try to find the new ‘normal’ in this terrible situation.

This was my first time reading one of Carys Bray’s novels and it was such a moving read.  I can’t even begin to imagine the pain of losing a child but Carys managed to convey all the emotion and then some.  I loved that her characters were realistic and flawed and that although there was no action (so to speak) the story flowed well and I found myself utterly absorbed.

The Nightingale by Karen Hannah
Set in World War Two in occupied France, this tells the story of two sisters who could not be more different.  Vianne is a sensible, family woman whose husband leaves to go to the front and she is left with her young daughter.  A German officer moves into her home and Vianne must somehow face herself and her neighbours in the light of her new life.  Isabelle is headstrong and stubborn, prone to running away when things get too much.  She decides to join the resistance and actively fight against the German occupation.

This story was simply beautiful.  I loved that the two sisters seemed so different initially and yet each was incredibly brave in their own way.  I found Isabelle a difficult character to like at the start of the story but as it unfolded I began to see why she behaved the way she did.  I won’t lie…when this story ended I CRIED.  Big, ugly, tears.  I’m not one for re-reading books but this is one I will definitely be picking up again in the future. 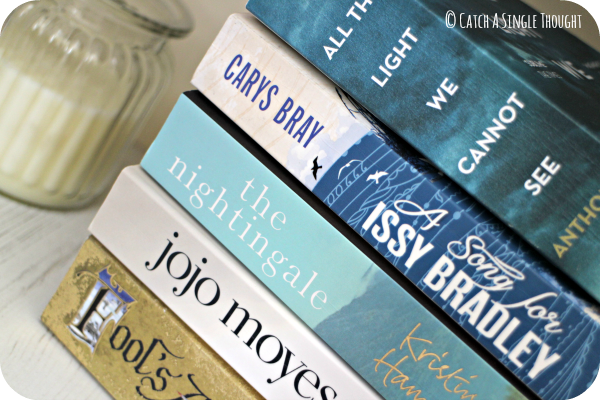 All the Light We Cannot See by Anthony Doerr
World War Two, occupied France.  Marie-Laure lives in Paris with her father who works at the Museum of Natural History.  Blind since the age of six, Marie-Laure has had to learn to accommodate to her new world.  When the Nazis begin to invade, she flees with her father to Saint-Malo where they move in with her great-uncle.  Werner is a young boy living in a mining village in Germany.  His interest in engineering and electronics leads him to be picked up and trained by the Hitler Youth.

I was initially unsure about picking this book up so soon after reading The Nightingale as the setting is essentially the same but I am so glad I did.  This is a wonderful story set against a harrowing backdrop about two young people struggling to find their place in a changing world.  I loved that you got the perspective of Werner who so desperately wants a better life for himself and is so aware that something isn’t right in his home country but is at a loss as to how to fit into that world and not lose his own identity and I loved that Marie-Laure is such a strong person despite her obvious difficulties.  Quite probably my favourite book of the year so far.

After You by Jojo Moyes
Lou Clark has to find a way to move on after the death of Will Traynor; she is in a job she doesn’t enjoy, living in a flat which doesn’t feel like home and is estranged from her family following her decision to accompany Will to Dignitas at the end of Me Before You.  Then one night she answers the door to a complete stranger and everything changed.

I LOVED this book.  I enjoyed Me Before You as a quick and moving read but I never really connected with Will as a character and found it difficult to feel empathy towards him.  However, with this book I found the characters much more relatable (I adored Sam) and I enjoyed discovering the ‘what happened after’ which I know many people were wondering.  Highly recommend if you enjoyed Me Before You.

Confessions of a Summer Parent... | with Anchor