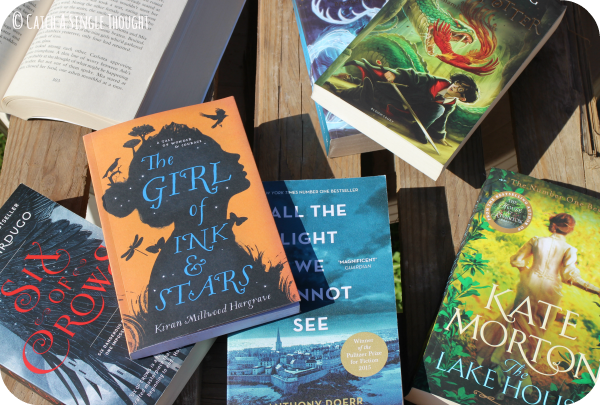 Way back in May (gosh how long ago does that seem!) I set myself a Summer TBR list here on the blog.  Then I filmed a video in June and changed it a little bit and now, as we reach the end of summer I thought it was time I did a little update.

First and foremost I have to admit that I am not great when it comes to setting myself a TBR.  I am very much a mood reader and when I am looking for my next read I like to just browse my shelves and see what takes my fancy.  If I feel like I am being forced to read a book then I tend to just switch off.

So I was quite surprised when I realised that of the 8 books I planned to read, I actually managed 6 of them.  Albeit I didn’t tackle the two trickiest books but I think that’s pretty good going!

If we take it from the date I filmed my TBR to the present day; I actually read 25 books over the summer which I am absolutely amazed at.  Usually I would hope to read that in a year!

If you are interested in hearing more about those books then do hop over to my Youtube channel but for today I am just going to share about the books which were on my Summer Reading List:-

All The Light We Cannot See – Anthony Doerr
I had heard such good things about this book that I was a little intimidated about picking it up but I am so glad that I did.  It is definitely a contender for one of my favourite books of the year!  Set in World War Two it follows the story of two young people; a blind girl living in Occupied France and a boy who lives in Germany and ends up part of the Hitler Youth Movement.  I found the dual perspectives to be really interesting, particularly the parts to do with the Hitler Youth as I haven’t read anything featuring that before.  I thought the writing was beautiful, the story was moving and well told and although there wasn’t a lot of ‘action’, it was still enough to keep me hooked all the way through.

Harry Potter and the Chamber of Secrets and Harry Potter and the Prisoner of Azkaban – J.K.Rowling
These were first time re-reads for me and I had honestly forgotten how much I enjoy J.K.Rowling’s writing style and how much more detail you get in the novels compared with the movies.  In particular I have noticed a difference between how I felt as a teenager reading them and how I feel now as an adult and parent!  I don’t think there is much point going over the plots of these books but I thoroughly enjoyed reading them again.

The Lake House – Kate Morton
This was one of the books which I was most excited to read over the summer.  I had specifically put off reading it until we were away in Wales because I knew I would want to just keep reading once I started and I was right.  I am a huge Kate Morton fan and this was everything that I wanted and expected from a Kate Morton book.  It follows two time periods; the 1930s and the present day and follows the story of the Edevane family who suffer a terrible tragedy in 1933 which forces them to leave their Cornwall estate forever and Detective Sadie Sparrow who comes across the abandoned estate in the present day; she is on a forced sabbatical from work and discovers there is a mystery surrounding the sudden departure of the Edevane family and decides to try and solve it.  I love the way that Kate Morton explores human emotions, the things which drive us to behave the way that we do, and how situations can appear so differently depending on whose perspective you are viewing it from.

Girl of Ink & Stars – Kiran Millwood-Hargrave
This is a middle grade book (aimed at children aged 8-13 years) and is a short fantasy about two young girls who live on an island which has been cut off from the rest of the world.  After something happens the two girls leave their section of the island and their adventures unfold from there.  I found this to be a quick moving book with not a lot of world-building but plenty to keep me interested.  I think it would be a great book for anyone in this age bracket.

Six of Crows – Leigh Bardugo
Another book which is easily likely to make it onto my favourites of the year was Six of Crows.  This is a high fantasy book about a group of criminals who are employed to take on an impossible heist; they need to break into a military stronghold known as the Ice Court and retrieve a hostage before the world is devastated by a magical discovery.  This book is very character driven and although it is described as a book about a heist, the heist doesn’t actually happen until the very end of the book and then you are left on a cliff-hanger!  Really it’s all about the characters and the world.  The second book in this series, Crooked Kingdom, comes out this month and I already have it on pre-order!

I will be posting my Autumn TBR very shortly but do let me know if you have read any of these books and what you thought, and if you have any suggestions for great books you have read which you think I would enjoy as well.

Links are affiliate.  These don’t cost you anything but I do get a little commission if you choose to purchase from the Book Depository 🙂