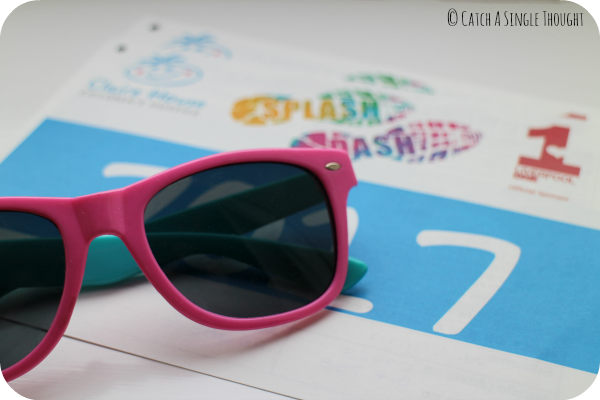 On the 24th September, we were invited along to Sefton Park in Liverpool to take part in the Claire House Splash Dash.

Claire House brought two of these messy, powdered paint events to Merseyside this year; there was a 3k race which took place earlier in July in Birkenhead and then the Sefton Park 5k race. 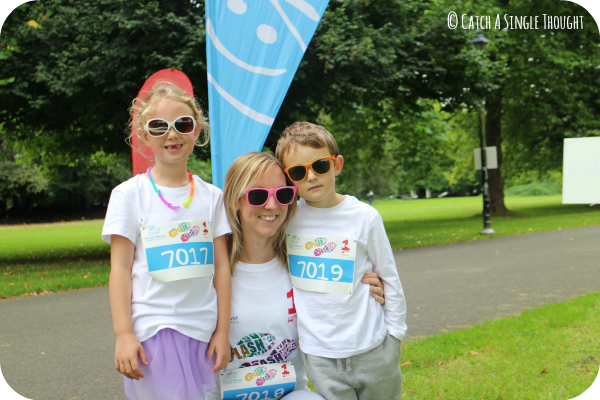 I was feeling pretty confident about our ability to complete the race in good time; we are a family who love to be outdoors and often go walking so I knew the kids would be up for it and the idea of getting completely and utterly covered in paint (and not getting in trouble for it!) made them beside themselves with excitement.

What I hadn’t perhaps counted on is the fact that they might want to run the majority of the race rather than just walk! 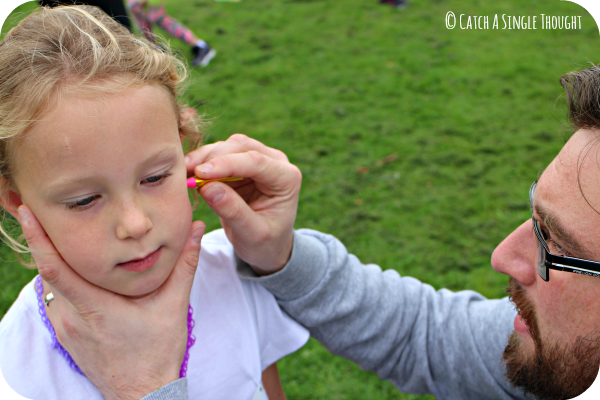 When we arrived at Sefton Park on the day of the event it was clear there was a party atmosphere.  All our race numbers and essentials had been sent to us so we just turned up wearing white clothing we didn’t mind getting messy and ready to run.  There were crowds of people milling around waiting, lots of stalls selling merchandise to wear whilst taking part and a real atmosphere of anticipation.  It stuck out to me quite clearly that this was an inclusive race; people of all ages and abilities were taking part and just out to have a good time and raise some money. 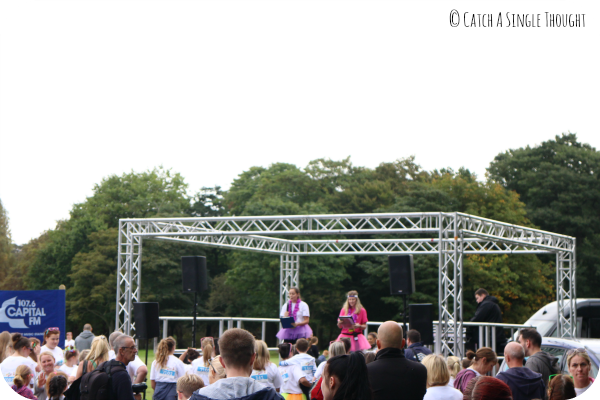 After being taken through some clubbercise to warm us up we joined our starting point with the walkers (I was still blissfully in the dark about Meg and Eli’s plan for me) and with a burst of powdered paint we were off!  It was possible to run, jog or walk so there was no pressure on anyone to ‘win’ or finish the race in ‘X’ amount of time which I thought was brilliant and the sections were clearly marked so you couldn’t accidentally get caught up with the runners. 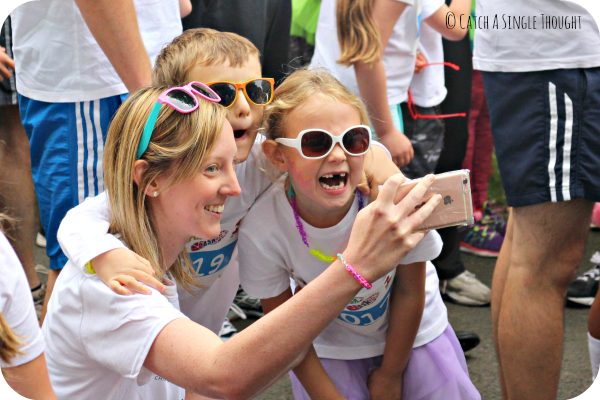 Literally, running as fast as their legs could carry them.

There were five colour stations in all, dotted along the course of the race: red, blue, pink, yellow and purple.  Each time we reached a station we slowed the pace down a little bit and two of the three of us enjoyed getting as messy as we could. 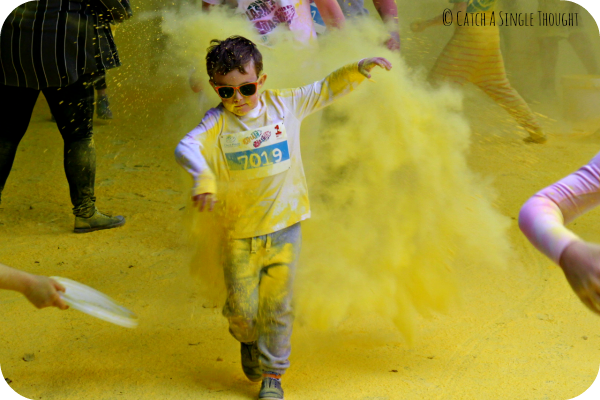 Unfortunately Eli decided he didn’t quite like having the paint everywhere and completely froze each time we reached a station…it took him a minute to build up his courage to run through and he stuck straight to the middle…yet strangely he still ended up with more paint on him than I did! 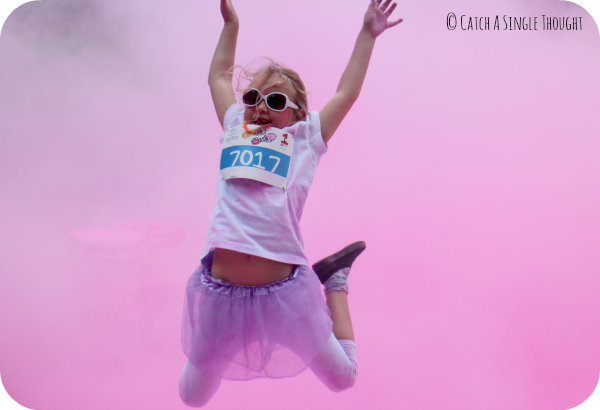 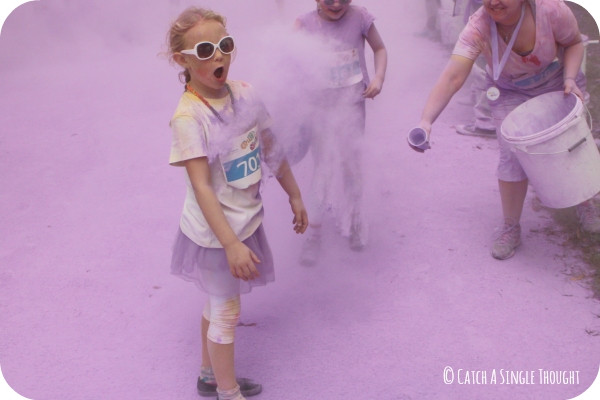 Meg on the other hand loved it, she absolutely got into the spirit of things, cartwheeling and dancing through each station making sure she was as messy as could be. 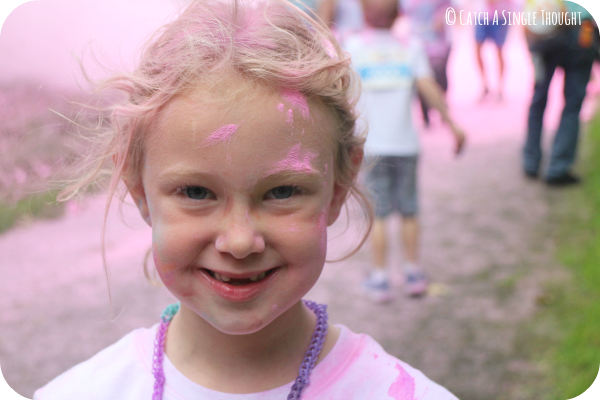 I was so proud of the kids managing to run almost the entire 5k.  We had bits when we walked and captured some photos, some bits when we took things a little slower and some bits when we enjoyed the fun of the paint stations but we also did a whole lot of running (much to my horror!) 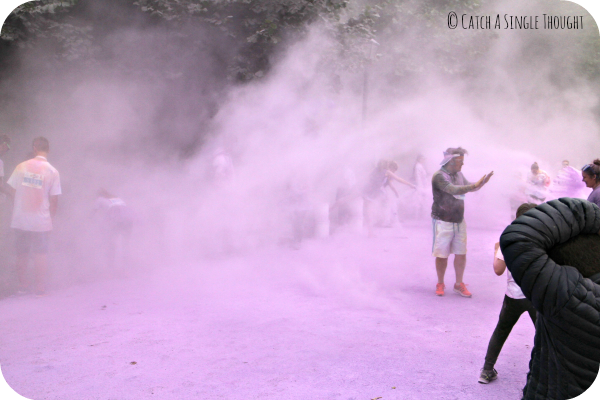 And believe me when I say that paint went everywhere.  As we were walking back to the car after the race we saw a little Westie pup with a pink sheen to his fur.  I don’t know how close they had got to the race but it made me smile! 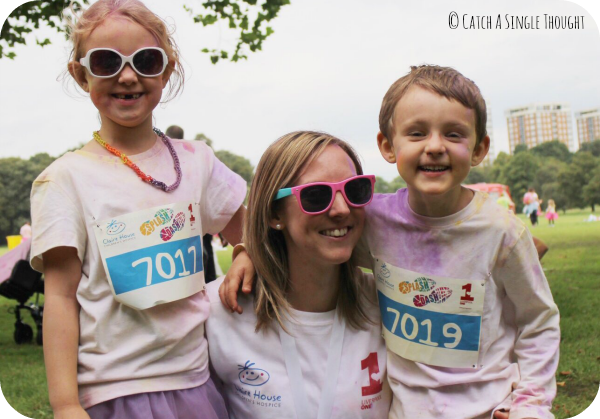 I would highly recommend this type of race for families who want the chance to have a bit of fun together whilst also raising money for an important cause.  Claire House is a children’s hospice which helps children who are seriously or terminally ill to live life to the full by offering amazing experiences and trying to bring a sense of normal family life with their nursing, care and emotional support.  The work that Claire House does is so important and events like these help to raise those much needed funds to allow their work to continue.

A huge thank you to Claire House for inviting us to take part in the race and giving us the opportunity to discover more about the work you do, and to raise money for the Hospice at the same time.  See you next year!