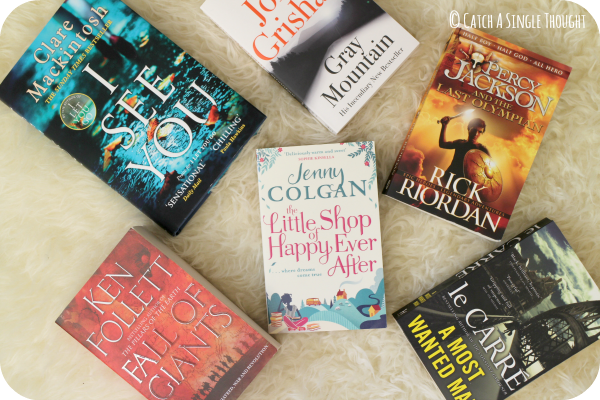 I was pretty impressed with my reading over September.  I had imagined I’d feel a bit slumpy after reading so many great books over the summer but luckily that didn’t turn out to be the case and although I slogged my way through one 850 page book it was totally worth the effort.

We are moving into the colder and wetter months of the year now which (in my opinion) are the perfect months for snuggling up under a blanket with a cup of cocoa and a solid read.  But then again, when don’t I think it’s the perfect time for reading?!

Gray Mountain – John Grisham
This was my first read of the month and I so wanted to love it.  It has all the markings of a classic John Grisham novel.  Think small town lawyer taking on big corporation on behalf of the little people.  In this particular book it follows a coal mining town who are trying to get benefits from the coal companies for the workers who are suffering from a condition called black lung.  But it just didn’t go anywhere.  There was no satisfactory resolution at the end, Grisham killed one of the main characters off right in the middle which was totally unnecessary and this book really felt like it was the first book in a series, which I don’t believe is the case.  I’d say give it a whirl if you are a Grisham fan but I felt like it was a little lacking.

I See You – Clare Mackintosh
Luckily I managed to follow up Gray Mountain with a brilliant page turner.  I have mentioned I See You just about everywhere I can think of because I thought it was amazing.  It’s a psychological thriller and I wont harp on about it too much here as I wrote a full review last week.  If you like fast paced books you can’t put down though I would highly recommend this.

Percy Jackson and the Last Olympian – Rick Riordan
This is the last in the original Percy Jackson series.  I obviously can’t go into too much detail as it’s the last of five books but it basically wraps up with the prophecy which has been talked about from book one finally coming to pass.  I have slowly been making my way through these books and enjoy them as amusing middle-grade reads with a bit of mythology thrown in for good measure.

Fall of Giants – Ken Follett
This was the epic book I picked up this month standing at 850 pages.  It is set during the First World War and we follow the stories of five very different families whose lives all interconnect in some way.  I really enjoyed that we got different perspectives and saw how the war affected the families but this book was incredibly slow moving and very political so I don’t think that it would be for everyone! 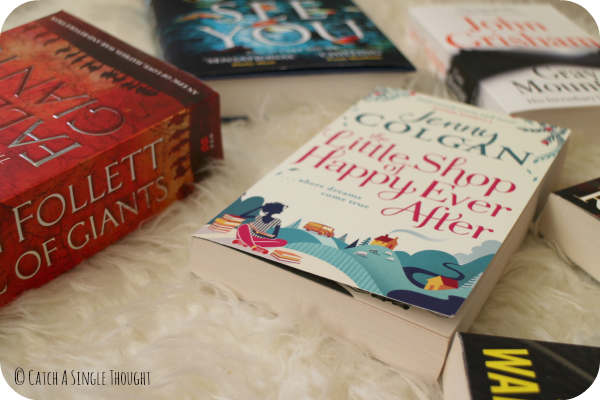 The Little Shop of Happy Ever After – Jenny Colgan
After reading Fall of Giants I needed something quick and light-hearted to read so I picked up this new offering from Jenny Colgan.  This is a lovely contemporary novel about Nina who decides to buy a van, convert it into a mobile bookshop and tour the villages of the Highlands in Scotland after she loses her job as a librarian in Birmingham.  This is a very warm-hearted read which will delight anyone who loves books and although I thought the love interest was predictable and everything probably tied together a little too nicely; it did everything I hoped it would and I really enjoyed it.

Unfortunately I ended the month much as I started it with my first le Carré book.  I had heard really good things about his writing and was really looking forward to it but again, I didn’t feel like this book did anything or went anywhere.  It is basically about how the small people in life get used by the ‘big’ people as pawns in their game against terrorism but I thought that it was stilted, that the relationships between the characters were abrupt and unbelievable and I actually originally checked that the book wasn’t a translated copy as I couldn’t get on with the writing style at all.  Definitely not one for me.
Currently reading: Scarlet by Marissa Meyer
You can also buy all of these books on Amazon and the Book Depository.