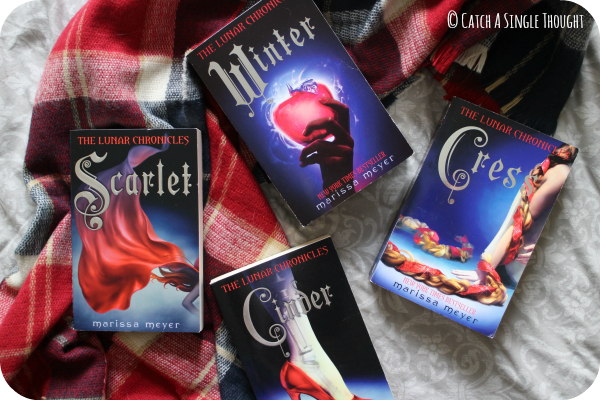 For the purposes of this review I am going to be talking about the four main Lunar Chronicles books, not the additional novellas which Marrisa Meyer has written to alongside this series.

This was my first fairytale retelling series and although I wouldn’t say that it is the most complex storyline or read, I found it to be incredibly enjoyable nonetheless.  I had seen it all over the book world; booktube, Goodreads, Amazon recommendations…the lot but it was only after I had a couple of people really get on at me to pick them and read them that I ordered the 4 main books. 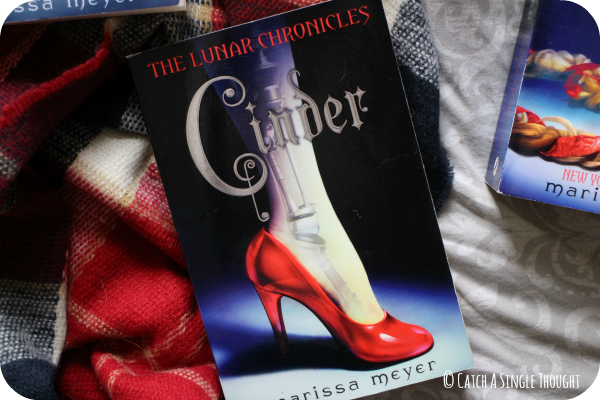 The first book is Cinder and, as you might be able to guess, this is based around the story of Cinderella.  But with a twist.  We meet Linh Cinder who is working as a mechanic in New Beijing.  However Cinder isn’t just an ordinary mechanic; she is also a cyborg (a human with additional metal/computer parts).  We have a lot of the same characters as in the original story; there is the mean stepmother, a cruel stepsister and, of course, the prince but I appreciated the spin that Marissa Meyer had put on the fairytale and the world she has created.

So Cinder is living in a world which is slightly different from the world as we know it.  There has been a fourth world war and as such, many countries have banded together and the political system is very different and the set-up is very different.  Not only that, but there are a group of people living on the moon known as ‘Lunars’ who have the ability to manipulate bio-electricity meaning they can apply ‘glamours’ to themselves affecting what people from Earth (Earthens) see as well as controlling Earthens thoughts, feelings and actions.  As you might imagine, because of this, Earthens don’t want anything to do with Lunars and are highly suspicious of them which is not helped at all by Queen Levana, who rules Lunar and is very much a dictator to the Lunar society.

Queen Levana wants to add Earth to her dominion and decides to do this by marrying Prince Kai, Emperor of New Beijing.  To add even more drama to the story, there is also a deadly disease which is making its way across Earth and which each country is desperately trying to find a cure for.  Guess who holds the antidote?  Queen Levana of course!

I will say that I guessed the big ‘twist’ in the story pretty much at the beginning but it didn’t take away the enjoyment factor for me.  I found Marrisa Meyer’s writing style really easy to get on board with and I was soon swept up in the world and the story.  I’m not going to go too deep into what each book is about as I went in pretty blind and think that’s it is much more enjoyable reading it that way; we all think we ‘know’ the fairytales which Meyer has borrowed for these books but it’s the surprises she injects along the way which really make the books stand out. 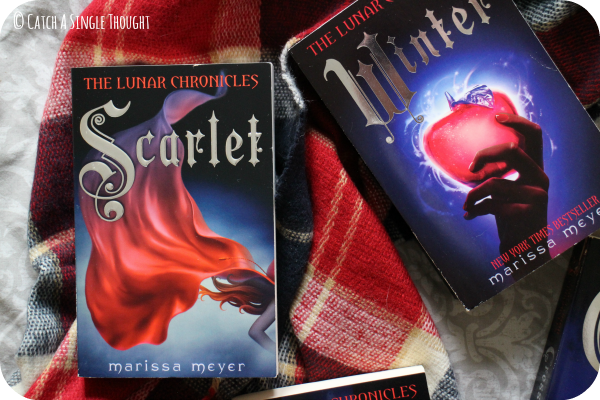 The second book in the series was probably my favourite.  Scarlet is the Red Riding Hood retelling and as I have a real thing about Wolves (yup, I’m firmly Team Jacob) it firmly ticked the box for me and although I have heard people say that Scarlet was probably the least developed of all Meyer’s characters I really enjoyed the Scarlet/Wolf story throughout all of the books.  I just used my imagination for the parts which Meyer didn’t flesh out! 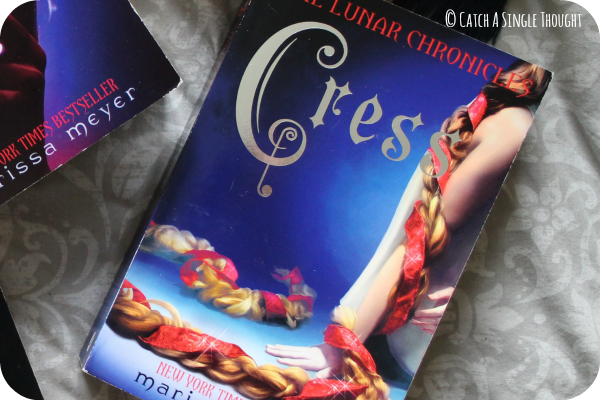 Cress is the third book and this was probably my least favourite, although Captain Thorne is right up there at the top of all time favourite book characters so that more than makes up for it.  Cress is the Rapunzel retelling and although I think that credit has to be given for the fact that Meyer has her stranded in a satellite for years and years she was pretty irritating.

However, the thing that I love about books is how different characters really speak to us. I was talking with two of my good book-loving friends about this series and we each had characters that we didn’t like at all and characters that we loved…and they were all totally different.  Which I think just goes to show how great it is to have a diverse selection of characters such as the ones Meyer has created; because there’s bound to be some which appeal and some which don’t.

The final book is an absolute beast in size and this is partly because Meyer had to somehow wrap up all the individual stories which she had created in Cinder, Scarlet and Cress.  This book is named after Princess Winter (aka Snow White) and we have all the other characters from the other three books in here as well.

Although I thought that maybe the stories wrapped up a little too nicely and neatly, I loved that they had a satisfactory ending and that we got to see what happened to each of the characters Meyer had written across all four of the books.

Overall I would say that these books are great YA reads; the stories are enjoyable with a wide range of characters and if you fancy a fairytale retelling with a twist then you will almost definitely find these books to your liking.

You can buy these books from Amazon and the Book Depository.