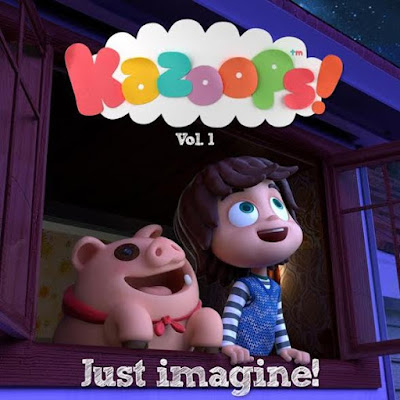 July this year saw the release of the Kazoops series on CBeebies which have proven incredibly popular with young audiences.  After nearly 8 years of having CBeebies as my faithful morning sidekick, it feels strange to only watch it occasionally but the Kazoops has fast become a favourite, mostly due to the variety of music.  The songs featured have included instruments such as ukuleles, glockenspiels, retro synths and plenty more.

If you aren’t familiar with Kazoops, it is about Monty, a six year old boy who asks endless inquisitive questions about the world around him with the help of his best friend, Jimmy Jones (who is also a pet pig!).  The songs are integral to the show and part of what makes it such an enjoyable watch.

In line with the shows popularity, at the end of October an album featuring 20 songs was released.  ‘Just Imagine – Volume 1’ is available from iTunes, Amazon, Spotify, Pandora and on YouTube.  We have been enjoying listening to some of the music which can be found on the album although this has proven to be Eli’s favourite.  We love the bright colours and the upbeat feel of the music (just be prepared for it to get stuck in your head!):-

This is an advertorial feature