I think it’s fair to say that I’ve always had a bit of a ‘thing’ about reading.  When you’ve moved house as often as we have it becomes pretty apparent, pretty quickly, which items you have the most of and books definitely falls into that category.

I have this dream of one day owning a house which has a room just dedicated to books, a la Belle in Beauty and the Beast with her floor to ceiling bookcases and the need for a ladder to reach the ones at the very top.  Oh that is the dream!

My addiction obsession habit of buying books has become even worse since I started making Booktube videos.  Now I get to talk with likeminded people about books that I have read, books I want to read and books that they think I should read and it’s all gotten a bit out of control!  Or so James would have you believe anyway.

It’s true that I have quite a few books sitting on my TBR bookcase just waiting to be read, and I have imposed a small book buying ban on myself until after Christmas so that I can give a little love to the books which are being continually passed over.

And so I thought that today I would share some of the books that I am hoping to read over the next few months.  Just so you can all hold me accountable of course! 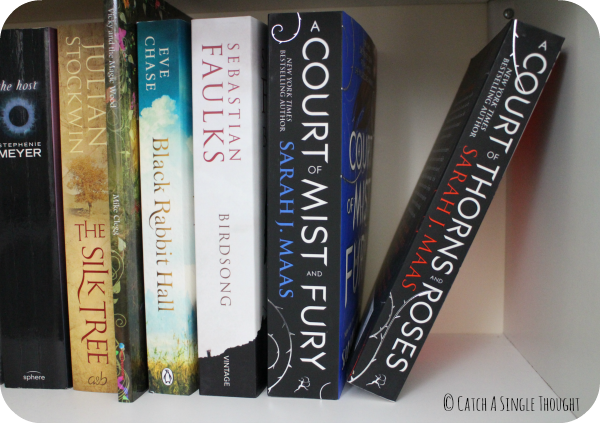 A Court of Thorns & Roses – Sarah J Maas
I actually know very little about this book other than the fact that people all over the book world have been absolutely raving about it, especially since the sequel, A Court of Mist & Fury was released earlier in the year.  I understand that it is set in the court of the Faeries and that is a ‘sort of’ Beauty and the Beast retelling with 19 year old huntress Feyre being taken captive by a Fae.  That’s pretty much all I know but I have both books sitting on my TBR shelf and I should have them read before the end of the year. 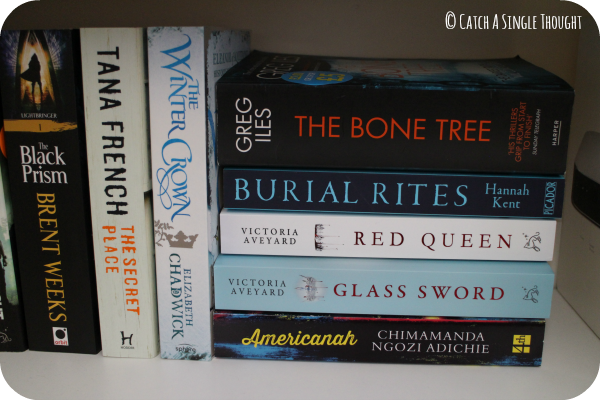 Burial Rites – Hannah Kent
This is a fairly new addition to my shelves but, again, it’s a book which I have heard a lot of great things about.  It is the story of Agnes, a young woman who has been accused of murder and is set in Iceland during the 1820s.  Agnes is sentenced to execution but chooses to tell her story to a priest.  I believe that there are several twists and turns in this book and that the story isn’t all as it seems.

Americanah – Chimamanda Ngozi Adichie
I have actually packed Purple Hibiscus by Chimamanda Ngozi Adichie to read on holiday as it was her debut novel and I always like to start at the beginning with a writer if I can.  That said, there is a lot of buzz around Americanah and I’d like to read it fairly soon.  It is the story of two teenagers living in Lagos who are separated when Nigeria goes under military dictatorship.  One of the teenagers goes to America and the other to the UK.  When they are adults, the two return to Nigeria, both changed and both about to face one of the hardest moments of their lives.  Ooh but I think it sounds so fascinating!! 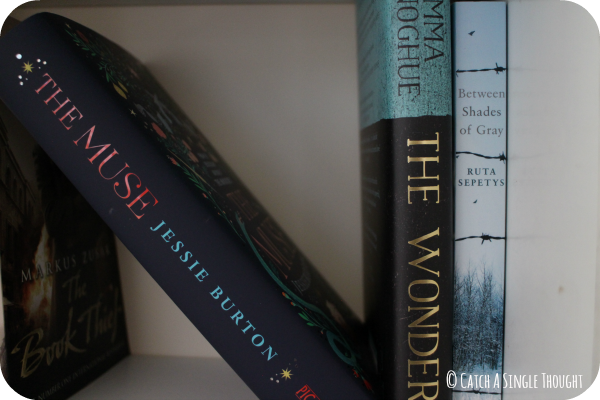 The Wonder – Emma Donoghue
I talk about this book in one of my more recent videos, so you can hop over if you want a full breakdown but it is essentially about an English nurse who goes to Ireland to watch over a young girl who is refusing to eat.  People are coming from all over the world to see this young girl who is supposedly surviving on manna from heaven but all is not as it quite seems as Lib, the nurse, soon discovers.  This is a psychological thriller and one which I can’t wait to read.

Between Shades of Gray – Ruta Sepetys
I seem to be loving historical fiction at the moment and Between Shades of Gray is right on point for that.  Set during the second world war it is the story of a 15 year old Lithuanian girl whose whole life is turned upside down when Soviet soldiers erupt into her life and separate her from her family.  She is taken to a work camp in Siberia where she must try to find life, and hope, in the bleakest of situations.

So there are just five books that I am hoping to read in between now and Christmas.  Do let me know if you have any other suggestions for me or if you have read any of the books mentioned above!

You can also buy all of these books on Amazon and the Book Depository.