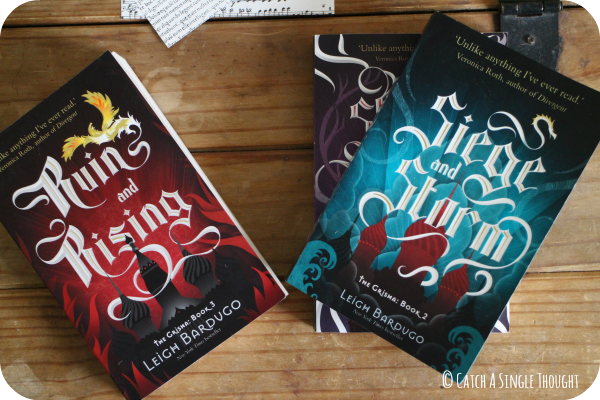 I am way late to the party on this particular trilogy but over our holiday I finally got around to reading Leigh Bardugo’s first trilogy: The Grisha.  Having read Six of Crows earlier in the year and adored it (I know, I haven’t shut up about it) I had high expectations for this trilogy which is set in the same fantasy world.

I wanted to read the trilogy before picking the second book in the Six of Crows duology up, to give myself a better grounding of the Grisha magic system.

It follows the story of a young girl called Alina who is a conscripted soldier in Ravka.  There is something called ‘The Fold’ which has separated West Ravka from the rest of the country, a dark wasteland which is almost impossible to cross without being attacked by the dark monsters who live there.  When Alina’s regiment is forced to cross The Fold, she discovers that she actually has hidden Grisha power and is immediately swept up and taken to The Darkling; the leader of the Second Army, an army of Grisha.

The Darkling wants to use Alina’s power to bring about the end of The Fold and we follow the story from there.  As Alina battles with herself and her newfound power, her love of her childhood friend Mal, and whether she will allow herself to be used by the charming but suspicious Darkling.

I don’t want to say much more than that as I don’t want to spoil the twists in the story for anyone but I have to say that I feel quite sad that overall, I didn’t enjoy the trilogy as much as I had hoped to.  I don’t know whether it’s my age or just my general feelings at the moment but I found Alina to be incredibly angsty in the second a nd third books particularly and the love story between her and Mal was just *yawn*.

I loved the darker characters in the series; The Darkling and Nikolai Lantsov were hands down my favourites as was one of the Grisha called Zoya and I felt like they could have had a lot more inclusion in the stories.  I would have liked to read from The Darkling’s perspective, for example, although I know that Leigh Bardugo has written a number of novellas about the peripheral characters which I plan to pick up at some point.

The story was enjoyable and I found Leigh Bardugo’s writing to be really easy to get into and read…I guess I was just waiting for some big twist right at the end, for her to not end the story in a way in which everything was tied up nice and sweetly and that didn’t happen.  If you like stories with interesting magic systems and (fairly) happy endings then I think you would enjoy reading this.

I feel as though if I had picked this series up first I might not have been so keen to read Six of Crows but equally, because I read Six of Crows my expectations were sky high and perhaps that’s why I was expecting more.

It’s probably also worth bearing in mind that this is a YA fantasy series so although there are some darker moments, it’s very much written for younger readers too.

You can buy the Grisha trilogy from Amazon and Book Depository.

A Family Holiday to Malaga, Spain ǀ with Clickstay {Part One}